Inside the surprisingly complex engineering process that creates an Olympic torch

A torch like the one in the Tokyo games is so much more than just a simple vessel for flame. This is how they spark into being. 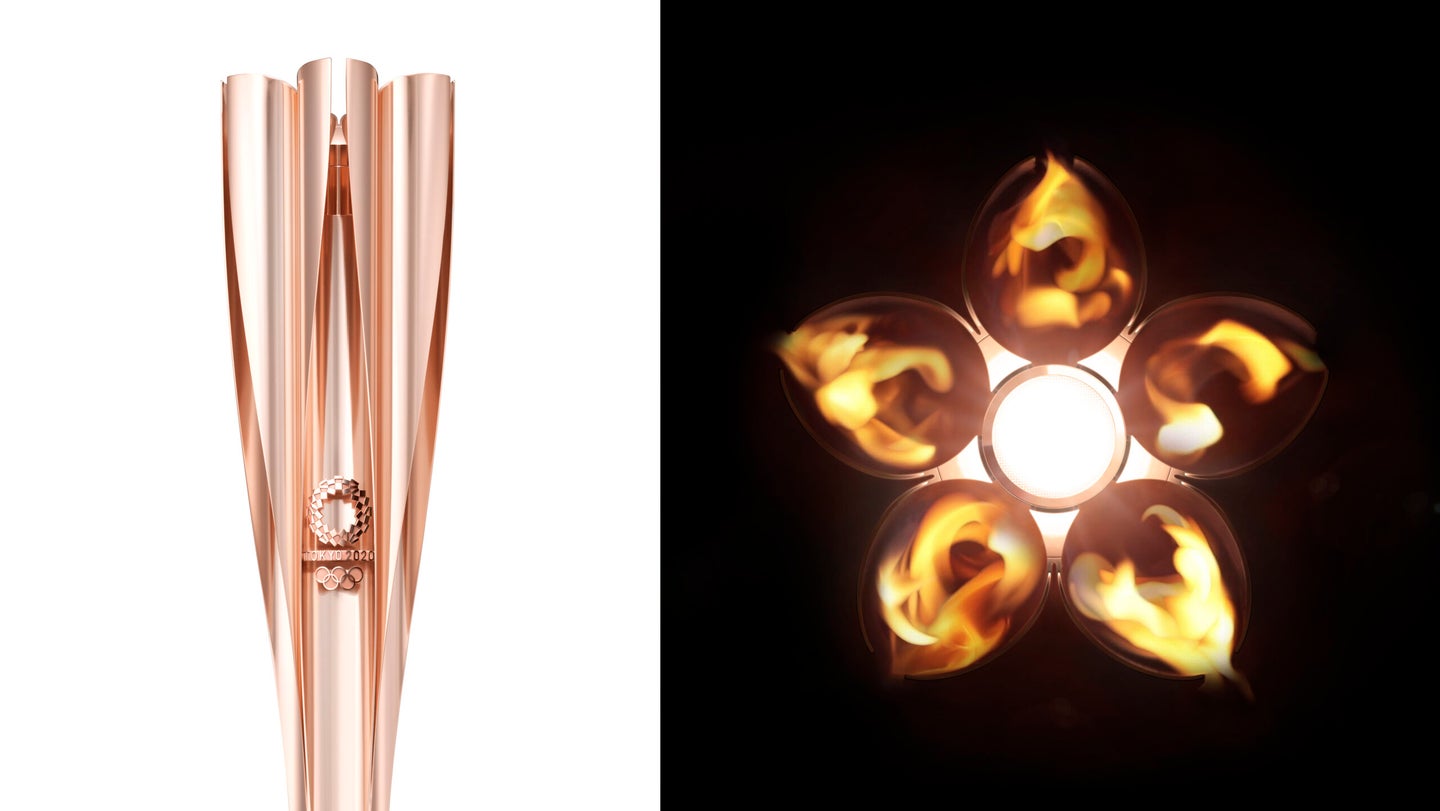 The unique Tokyo 2020 Olympic torch, designed by Tokujin Yoshioka, was inspired by the cherry blossom flower. The torch is fashioned out of 30 percent recycled aluminum. Courtesy of Tokyo 2020
SHARE

The Olympic torch relay represents an iconic beginning to the games. Former Olympians and members of the public carry the Olympic flame from Athens all the way to the opening ceremony, signifying the official commencement of the games.

Beginning with the Berlin 1936 summer games and the 1952 Oslo winter games, each iteration has featured a novel torch design that reflects the identity of the host country in addition to displaying the Olympic flame throughout the torch relay. This year, the games kick off today, July 23, with the lighting of the “Celebration Cauldron” in Tokyo. Expect that to happen just after 8 pm Tokyo time, or 7 am EDT.

Creating a unique, functional torch is a massive undertaking. Identical torches must be manufactured for each runner in the relay before the initial lighting of the Olympic flame in Greece. The entire process of designing, modeling, prototyping, testing, and manufacturing actually begins years before the games themselves begin.

The design of the Olympic torch

The fundamental elements of an Olympic torch are simple. It must contain a fuel canister and discharge system to support the burning of the flame; the Olympic flame must be clearly visible while burning and resistant to being extinguished under extreme conditions; and it must be a manageable weight and shaped in a way that is easy to hold. Beyond that, the unique design for a particular host city is left up to the organizing committee. 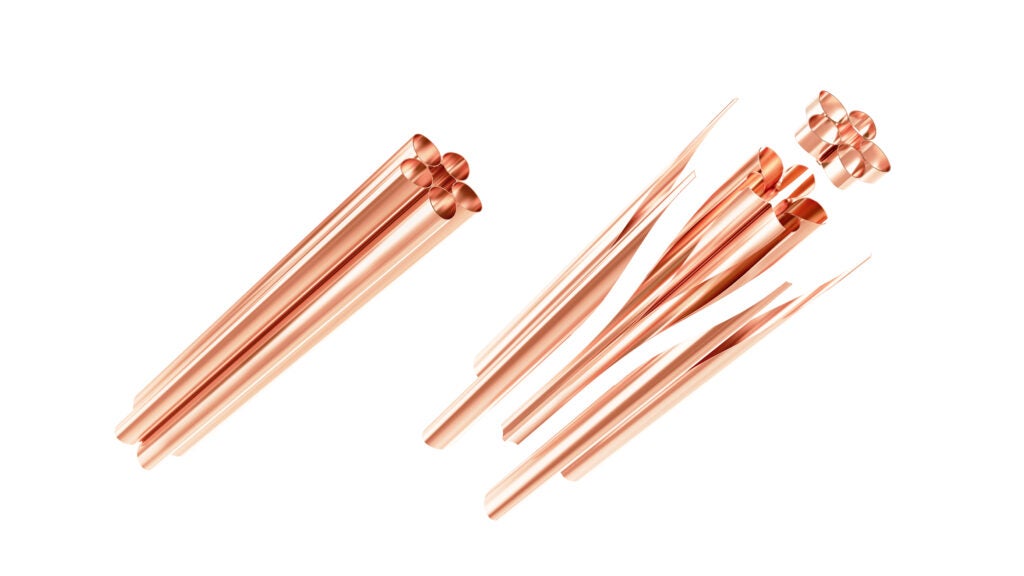 The concept design of the Tokyo 2020 Olympic torch. Courtesy of Tokyo 2020.

Typical torches range from 15 to 32 inches in length. Past materials span a wide range — aluminum has been a popular choice in recent years, but various kinds of natural wood, other metals, glass, and resins have comprised torches.

Design teams submit a portfolio of ideas to the committee, which then selects a smaller group of finalists. The final teams are asked to come back after a short period of time with a plan for obtaining the required materials and manufacturing the proposed design, according to Jay Osgerby, co-founder of the design studio Barber Osgerby, which was behind the London 2012 torch.

Each torch is designed with the host country in mind. In the case of the Tokyo 2020 torch, designer Tokujin Yoshioka was inspired by the traditional flower of Japan, which is the cherry blossom. Yoshioka also shaped the torch out of aluminum recycled from the temporary housing constructed in the wake of the Great East Japan earthquake and tsunami in 2011, according to the Tokyo organizing committee. Approximately 30 percent of each individual torch contains this recycled aluminum.

For London 2012, the triangular shape of the torch signified the Olympic values of excellence, friendship and respect, the Olympic motto of “Citius, Altius, Fortius,” in addition to commemorating London’s third time serving as host city. Each torch also featured 8,000 perforations to represent the 8,000 torchbearers and the 8,000 miles of the relay route from Greece and then throughout the United Kingdom and Ireland. 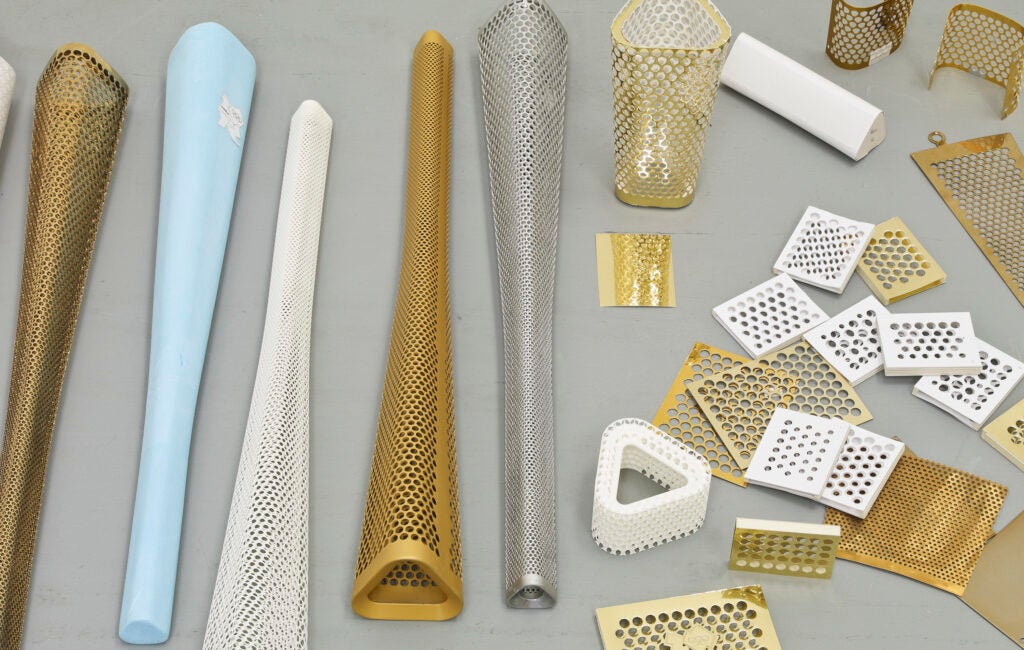 Before manufacturing, the designers of the London 2012 stage went through many stages of prototype-making and materials evaluation to optimize the final design. David Brook.

The torch for the 2002 Salt Lake City winter games incorporated an aged metal finish to signify the American West and copper to represent the history of Utah. After the initial concept was finalized, the 2002 torch was handed off to a team at the Georgia Institute of Technology for 3D modeling and prototype development. Tim Purdy, senior lecturer of industrial design, led the modeling team. “We used some 3D printing technology to basically make two prototypes of the torch,” he says. Prototypes were as far as 3D printing could take the torch. “There was nothing existing at that time in the [3D printing] industry that could handle extreme heat so we had to go with more traditional methods,” Purdy says of the move from prototypes to manufacturing.

Even in 2012, for London, large-scale 3D printing of the torch was considered, but was dropped in favor of more reliable metal welding and laser perforation. “It was important to the committee that the torch technology represent technology in the UK,” Osgerby, who designed the torch with his colleague Edward Barber, says. “At the time, 3D printing and laser sintering was really taking off in the automotive industry and Formula One, and aviation.” While Osgerby says laser sintering was a promising option, the committee ultimately decided that the technology was too new, and they couldn’t afford to have it go wrong.

Equally important as the outer design of the torch is the inner workings of the fuel canister system that feeds the flame visible at its top. In fact, according to Tecosim, the engineering firm that collaborated on the London 2012 torch with Barber Osgerby, the first metric for deciding which type of fuel and fuel system would be used was the size of the canister. The canister determines the amount of space available in the aesthetic design and the amount of fuel required to produce a yellow flame of at least 10 inches in height, with a burn duration of a minimum of 10 minutes.

After a fuel canister is selected, the next consideration is the kind of fuel that will be used. The seven most recent Olympic torches have been fueled by substances such as propane, butane, or a mixture of the two. The London 2012 torch designers explored a green fuel alternative which combined elephant grass and coconut oil, but it was ultimately abandoned for the final torch due to challenges with lighting and extinguishing the flame, Osgerby says. The Rio 2016 design team also researched an ethanol biofuel alternative which didn’t come to fruition due to inconsistent flame brightness under heavy weather conditions. Both design teams ultimately elected to go with a mix of propane and butane.

While butane gas can be stored at a lower pressure than propane, it requires higher temperatures to be converted from a liquid in the canister to a gas, the state in which it is fed to the flame. Liquid propane, on the other hand, evaporates into gas around -40⁰F, so a mix of 55 percent propane and 45 percent butane was chosen to balance safe fuel pressure within the canister with a lower evaporation temperature. 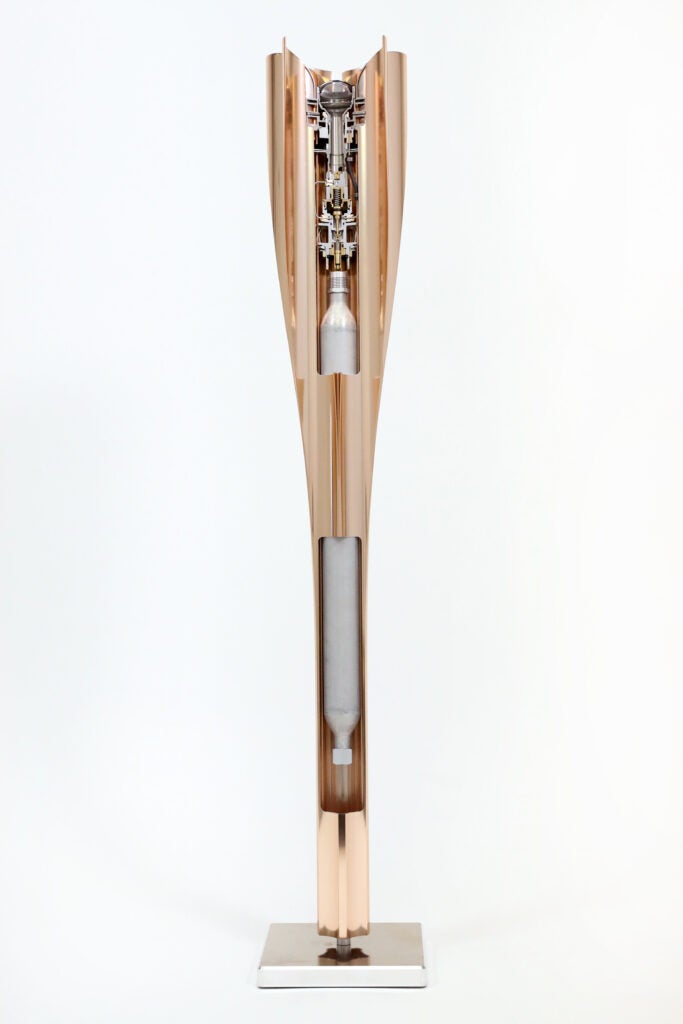 The Tokyo 2020 torch features a fuel canister and burner system similar to that of its London 2012 counterpart. Courtesy of Tokyo 2020.

Tecosim says the burner system itself is very similar to that of a hot air balloon. Liquified gas is removed from the canister with a long offtake tube that runs up the length of the torch. From there, fuel is dispensed into a stainless steel coil that wraps around the burner unit at the very top of the torch, just under the base of the flame. Here, the fuel is heated very quickly and converted from a liquid to a gas before being fed to the flame via the burner nozzle.

Finally, the gas is released through a special valve in the burner unit. “The valve was designed and calibrated so that it allows an exact ratio mix of gas and air to create the desired yellow, very visible flame,” Tecosim says.

Since the fuel is removed from the tank as a liquid, the flow rate of fuel required to sustain the flame is maintained as “the high heat energy provided by the torch flame allows the evaporation of the liquid into a gas, before it reaches the burner nozzle,” the engineering firm explains.

Along with the development of aesthetic and technical prototypes, the torch is subjected to a variety of tests to ensure the flame can withstand extreme weather conditions, high altitudes, and even being dropped during the relay.

In the case of the London 2012 torch, testing was conducted at the BMW wind tunnel in Munich, Osgerby says. The torch was tested at temperatures ranging from 23⁰F to 104⁰F, wind speeds of up to 50 miles per hour, various humidities, simulated driving rain and snow—all at variations in the torch angle relative to the airflow in the tunnel. “In support of the climatic wind tunnel testing, there were several hundred hours of torch airflow testing completed, using a large industrial fan and fabricated nozzle to boost the airflow speeds,” Tecosim says.

Additionally, the torch was dropped from a height of 10 feet onto a concrete floor, and altitude-tested at the top of Mount Snowdon, where wind gusts were more than 50 miles per hour. Tests such as these are typical for the vetting of the torch.

The final step in the long process of developing the Olympic torch is manufacturing the thousands of torches required for the torch relay. The manufacturer, like the design, varies from year to year depending on the materials and specifications required. 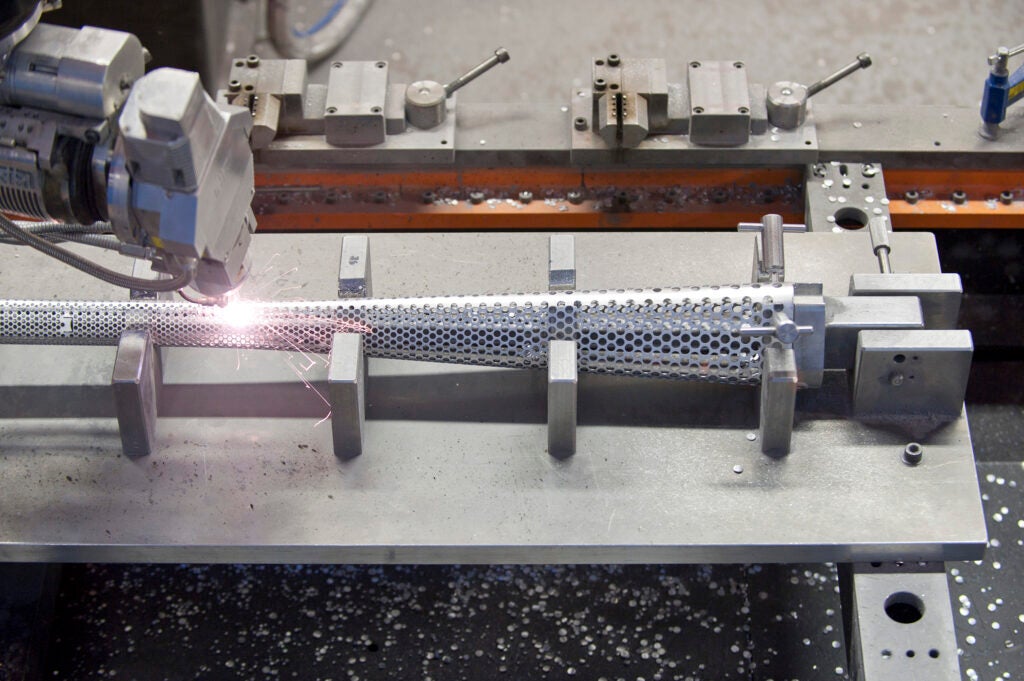 After the initial piece of aluminum was perforated with the 8,000 required holes, the London 2012 torch was robotically welded into its final shape. The gold color was applied to the surface at the end of the process. Lee Mawdsley.

In 2002, Coleman, an American manufacturer of outdoor gear, manufactured the metal components of the torch while the glass topper was obtained from a supplier overseas, according to Purdy. In 2012, manufacturing logistics were handled by The Premier Group, an engineering firm based in Coventry, UK. Each torch faces unique challenges in the scale-up of the torch design—for Salt Lake City, the glass topper was very fragile, and for London, a new laser cutter was obtained in order to cut the 64 million circles required for the group of 8,000 torches.

“We actually got a new laser cutter, one that could cut 16 holes a second,” says Osgerby, one of the torch’s designers. The final laser cut product debuted in the first leg of the torch relay in May 2012 and made its final appearance at the opening ceremonies 78 days later, officially opening the games with the lighting of the Olympic flame in London and continuing the tradition of its unique predecessors.