Humans could survive underground, but it would take a lot more than shovels

How to avoid becoming a full-blown mole person. 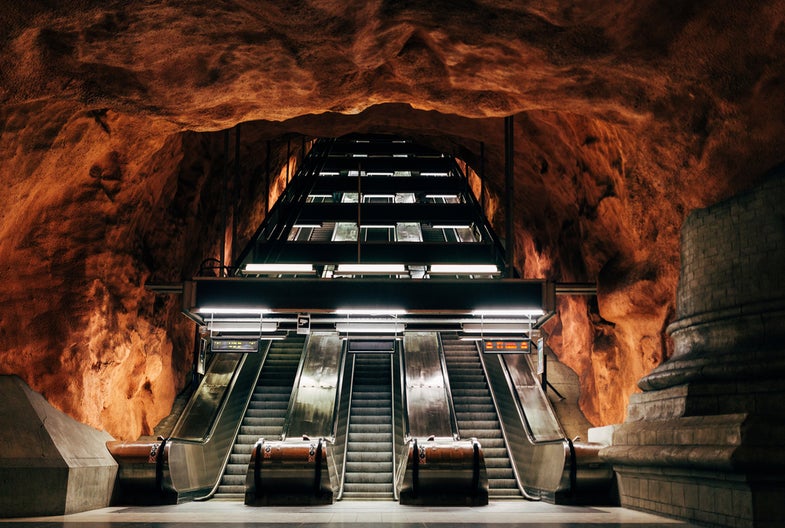 At the Whitney Museum of American Art, you can stand under a boxy old TV, mounted on the wall just above eyesight, and watch the pixelated clouds from Mario Kart slowly blow across the screen. Stripped of their context in the larger Nintendo game world, Super Mario Clouds, 2002, by multimedia artist Cory Arcangel, the artificial sky feels uncanny: just familiar enough the difference threatens to drive you insane.

While tracking the slow creep of Arcangel’s creation, I wondered: If rising sea levels, air pollution, and temperatures one day push humanity underground, is this all we’ll have to remember the sky?

Humans have lived underground for millions of years, but only in fits and starts. Our cave-painting ancestors left behind handprints and hunting scenes. In Tunisia, many people still live in what the The Atlantic calls “crater-like homes,” with rooms built into the Earth, and a central circular patio open to the sky. And in the “dugout” village of Coober Pedy, Australia, locals pray in a subterranean cathedral and visitors sleep in sediment-streaked hotel rooms.

Underground development continues to this day. Many northern cities maintain underground tunnels, some so elaborate as to be christened “shadow cities,”, in order to cope with severe winters. In Beijing, a million people live in nuclear fallout shelters beneath the city’s clogged urban arteries. Other dense urban spaces, like London and Mexico City, are also seeking to grow down, now that the limits of sprawl and high-rises become clear.

Still, even “cavemen” ventured outdoors. Living entirely underground would be unprecedented, to the point of being nearly unfathomable. But experts say with good design and a lot of psychological support, humans could make convincing—and surprisingly healthy—mole people.

Good thing, too, because the above world is looking increasingly inhospitable.

The biggest difference between living on Earth and living in Earth is sunlight. UVA and UVB rays are essential for growing plants for food and stimulating the production of vitamin B in the human body. These golden rays also appear to have immune-regulating affects, aid in the treatment of psoriasis, and keep us happy. But “sunlight” doesn’t necessarily have to come from the actual sun. LED lamps that offer UV wavelengths can crank out the rays our bodies—and our crops—crave.

Instead of sprawling, sun-drenched fields, underground farms will be more like metal boxes bathed in high-intensity lights and fed by nutrient-rich recycled water. Such systems already exist: Square Roots, an indoor farming company, grows vertical rows of leafy greens in compact shipping containers packed tight with red and blue LED bulbs. Using a method called hydroponics, farmers can circulate water infused with mineral nutrients through the network of life-sustaining shelves. While it operates out of a parking lot in Brooklyn, these systems are, for all intents and purposes, already underground, so long as there’s electricity.

Securing a food supply isn’t enough, however. Humans also need vitamin D to maintain bone health. The best-known source of vitamin D may be sunlight exposure (which encourages our bodies to produce vitamin D on its own), there are plenty of other ways to get your hands on the good stuff. In 2012, Slate reported on how a Russian cult survived underground, thanks in part to vitamin D-rich foods. So long as we can continue to farm animals in our earthen abodes, egg yolks, fish, milk, and cheese will keep us in the clear. If that doesn’t work, vitamin D supplements and fortified foods like cereals and juice could do the trick.

Sunny dispositions might also be at risk. Seasonal Affective Disorder, better known by the apt acronym SADs, is already a wintertime scourge. As daylight becomes increasingly sparse each season, many already turn to “happy lamps,” which provide artificial sunlight. Though some SADs sufferers may need antidepressants, therapy, or other forms of support, carefully-planned light therapy can reduce many of the most severe symptoms.

But things are liable to get a lot worse sub-surface. When isolated in caves without light, humans have been documented to sleep for as much as 48 hours at a stretch. Using artificial lights to regulate Circadian rhythms will be another essential component of any subsurface world.

Going underground may be physically possible, but it’s sure to be psychologically taxing. Lawrence Palinkas is a professor at the University of Southern California and an expert in extreme environments. Typically, he says, people are screened for traits that would allow them to thrive in a stint aboard the International Space Station, or a sabbatical at a remote research outpost in the Antarctic. Characteristics like openness to new experiences, for example, are often deemed essential.

But a motley crew could do alright, too, if they work together. Dedicated “change agents” with astronaut-like qualities might help to establish new cultural customs. Educators could disseminate the information and tools people need to thrive underground. “Over time, one could imagine that people would become adjusted to living underground and adopting new patterns of behavior that would enable them to live comfortably with no adverse effects on health and well-being,” Palinkas says.

Design could play a role in our adaptation, too. Researchers in Antarctica, where greenery is sparse, quickly recognized the mood-boosting benefits provided by laboratory greenhouses. Similar spaces could pay dividends in our crusty new home. Other positive sights, sounds, and smells could migrate with us—and not just in digitized Super Mario form. A plan for an underground city in Singapore has expansive shafts pulling daylight down into the layered depths. Mock-ups for a Lowline park in New York show will “provide breathing space,” according to the BBC, through “well-lit oases with palm trees and illusions of the sky.”

Ultimately if technology and culture can support us in space, they can probably support us inside our own planet, too. Whether we need to do it, or can do it at scale, remains to be seen. Whatever happens, Palinkas says, “it’s certainly not just a matter of digging a big hole in the ground.”