The stiletto heel is the embodiment of post-war material science 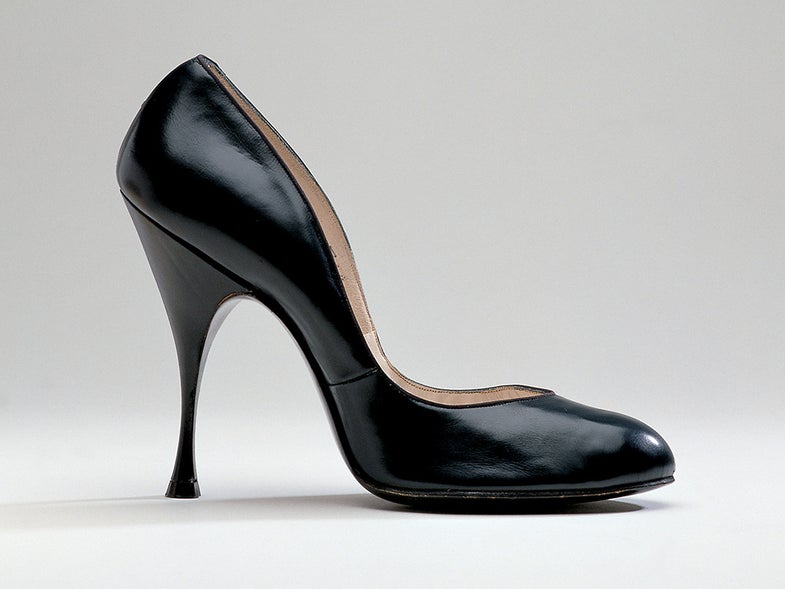 The rise of the stiletto in the 1950s was a pivotal moment in the history of fashion, feminism, and culture. Defined by a thin, spiked heel as little as 0.9 inches in circumference, the stiletto can be any height, but is often associated with a lift of 3, 4, 5, or more inches. Without it, the pages of Vogue magazine and the sets of Sex and the City would have looked rather, well, pedestrian. The most florid designs of revered shoe designers Manolo Blahnik and Christian Louboutin might never have come to fruition. And the ceaseless speculation about an innate human desire for stilettos likely never would have begun.

What’s often overlooked is that the stiletto was also a pivotal moment in the history of material science—that beautiful, applied stepchild of the master discipline physics—and engineering. Whether they credit André Perugia, Roger Vivier, or Salvatore Ferragamo, experts agree this particular heel, named for an Italian dagger with which it shares its sinewy shape, could never have been realized without desire, creativity, and steel. Where the much-maligned heel is going, however, is anyone’s guess.

“I’ve spent the past 18 years trying to unravel all this history,” says Elizabeth Semmelhack, senior curator at the Bata Shoe Museum and the author of several books on shoes. The Bata, which is situated in the heart of downtown Toronto, was designed by its architect to look like a shoebox. Its collection, the largest of its kind in the world, includes more than 13,000 shoes and related objects. There’s an exact replica of Otzi the Ice Man’s shoe, which looks like a bird’s nest and is the size of a dinner plate; 19th century chestnut crunching clogs that seem more like a Sweeney Todd set piece than a common agricultural tool; and Vietnam War-era boots designed with a second sole to leave the impression of enemy troops, thereby covering an American’s tracks.

High heels (of which stilettos are a sky-high, ultra-fine sub-category) were originally worn by men. “I’ve traced it back to as early as the 10th century in Persia, where heels were worn in tandem in stirrups,” Semmelhack says. The lift better anchored soldiers to their noble steeds and, Semmelhack says, allowed them to wield heavier weapons. Eventually, the style spread, likely through trading and political networks. By the mid-1500s, heels were propping up Dutch and English men.

“But the question becomes, when did women begin to wear heels?” Semmelhack says. In Venetian courts, wealthy women took to wearing a particularly precarious platform called the chopine in the 1500s. It often required an attendant’s help to balance in. But the heel’s mainstream appeal among women likely began in the early 17th century, as trendy European women began riffing on menswear broadly, according to Semmelhack.

Heels were a natural facet of this gender-bending fashion, with men and women wearing the stylish lifts simultaneously. As a result, the shape of the heel became the distinguishing factor in the 17th century. Men wore big, blocky heels. And women wore thinner, more narrow heels. “This is why we don’t consider cowboys to be wearing heels, although they’re often wearing significant heels,” Semmelhack says.

By the 18th century, men had given up on being “well-heeled” altogether. The once-fashionable shoes were seen at odds with the principles of the Enlightenment, like rationality and the notion of equality (between free white men), according to Semmelhack. With the exception of a few masculine outliers like the cowboy boot, heels came to be considered solidly and solely feminine—a sensibility that largely persists to this day.

Throughout this thousand-year history, heels got higher and wilder. But there was a limit to their potential: wood, which was the primary material in shoemaking prior to World War II. “You can only carve wood so narrow that, from a physics standpoint, it cannot support a woman’s weight,” Semmelhack says. In the 18th century, cobblers and cordwainers tried to cope in numerous and largely unsuccessful ways. Semmelhack has seen shoes with reinforced shanks in the instep, for example, and heels placed near the center of the sole instead of the back. Still, women would often return heels that had splintered, according to newspaper articles Semmelhack studied.

With only wood to work with, most women in the early 20th century wore wedge heels or platforms. These shoes were considered fashionable and graced the pages of magazines like Vogue. But they weren’t considered desirable. As a result, erotica illustrators dreamed up fantastical, fictional footwear for their posters and postcards. “They end up drawing women in these heels that are so long and so thin, they couldn’t resist in reality at that time,” Semmelhack says. These images, which were taken into the battlefields of Europe and the Pacific, created new expectations for how women should look and act, Semmelhack says, but material science hadn’t caught up.

That all changed in the 1950s. Like architects designing the first skyscrapers, fashion designers found that steel’s high tensile strength—or ability to stay strong and withstand heavy loads even as it’s elongated—was an asset in shoemaking, too. While the precise history is disputed, it appears that around 1951, André Perugia sent his “needle heel” to market. It was nearly 4 inches tall and mind-bendingly thin, with a subtle swooping shape. In 1954, Roger Vivier of Dior released the 3.1-inch Aiguille stiletto, which helped to cement the fashion house’s reputation as a forward-thinking purveyor of luxury goods. “It seems that the ability to extrude very narrow but extremely strong steel was an innovation that was required before the stiletto heel could be invented,” Semmelhack says.

But the breakthroughs weren’t over. Like Benjamin Braddock in the 1967 film The Graduate who’s told “there’s a great future in plastics,” designers soon turned to synthetics. “The metal stiletto is quickly replaced by very, very hard and strong plastic, which is lighter weight and could also be done in very, very thin shape,” Semmelhack says. Today, she notes, many heels are still sculpted from plastic.

The stiletto’s popularity has waxed and waned over the last half-century. Marilyn Monroe loved them and Sarah Jessica Parker does, too. But women of the 60s found them repressive, and today many consider them downright dangerous. While steel and plastic can keep people propped up and their weight carefully distributed without the shoe cracking, our feet are a different story. Ingrown toenails; “hammer toes,” where toes are permanently bent downward; and even tendonitis are common among individuals who wear high heels regularly.

In recent years, some have tried to rehabilitate the stiletto. Podiatric surgeon Marion Parke started a luxury footwear line that reportedly rely on a “unique insole, which is sculpted to follow the natural contour and curvature of the bottom of the foot” to reduce pain—for a few hundred dollars a pair. According to an article in Forbes, padding around the foot and in the arch keeps it straighter in the shoe, stabilizes the heel, and redistributes body weight. Former SpaceX executive, Dolly Singh, founded Thesis Couture in 2013 to solve a similar problem. Singh’s $900 “Olympus One” stilettos reportedly redistribute the burden of your body weight from your toes—which cope with 80 percent of your body weight in a traditional heel—to the rest of the foot using her own secret engineering strategies.

Those who have tried the shoes say both Parke and Singh have made something moderately more comfortable. But few say they want to wear them all day. And, Parke has said repeatedly in interviews with the press, no one should think her shoes will fix their existing orthopedic issues.

If steel and plastic were the ground-breaking tools of 20th century shoemakers, Semmelhack thinks 21st century footwear could be refashioned by 3D printing technology. “With the ability of very strong, innovative materials to create new shoes, and women turning away from very high heels, I wonder if we will see new innovative heel shapes emerging,” she says. The stiletto may never disappear, but new prototypes are already emerging, from 3D printed crescent-moon heels to stylishly warped, Gaudi-like wedges.

But, fashion aside, what’s the most sensible footwear choice? Try sneakers, sandals, even Crocs—just put the heels down. “Your foot needs to be in flat in order to be comfortable,” Semmelhack says.