Engineering The Ideal Olympian: A Chat With Katie Uhlaender

The athlete opens up about sliding downhill at speeds of 80 mph, weightlifting and more. 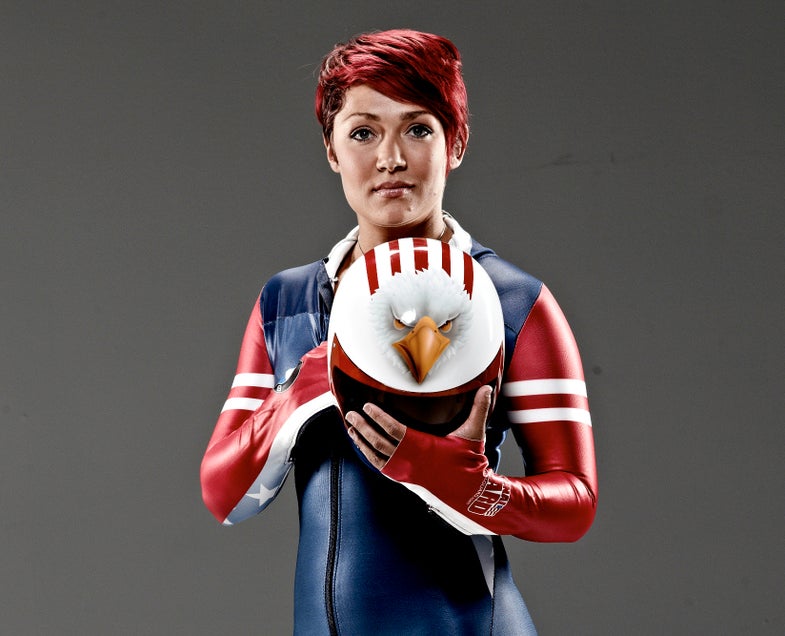 Katie Uhlaender’s career in skeleton has featured some notable highs, such as winning the World Cup two seasons in a row. She hopes to add an Olympic medal at Sochi, where as part of the U.S. skeleton team, she’ll be competing with a new carbon-fiber sled. Excelling in skeleton requires physical strength, determination, and the perverse ability to enjoy sliding downhill at high speeds without brakes and with no steering system other than your body. Uhlaender has all three qualities in high abundance.

Skeleton made appearances in the 1928 and 1948 Olympics, and then didn’t reappear until 2002. How did you get involved with the sport?

KU: I started skeleton when I was 19. A girl I met at high school talked me into trying it, and eight weeks later I was national champion.

Do you ever experience fear when sliding downhill at speeds of 80 mph or more?

KU: I’ve always loved going fast, but it’s not like we don’t experience fear. I think we just process it differently. We accept it. I call it relaxed chaos. You take what’s coming at you, do the best you can to stay calm, and try to make calculated decisions to accomplish speed.

The U.S. skeleton team got new sleds for the 2014 Olympics, and you worked directly with the engineers designing them. What was that process like?

KU: There is no chance athletes can talk to engineers in their language unless they also have an engineering degree. But some of the engineers, such as Hans [deBot] at deBotech, are used to working with athletes and understand how to talk to us. It’s amazing to be able to say to an engineer, “I want my arm to be like this,” or, “I want to turn a corner and have the sled do that,” and with deBotech, it was like they were magicians. I don’t even think I spoke in complete sentences, but the guys were able to set up the sled so that it felt exactly the way I wanted it to.

And why is customization important for skeleton?

KU: In skeleton, athletes put all the steering input into the sled with our bodies—it’s our shoulders, our knees, the shifting of our weight—and we absorb everything. There’s no shell covering our bodies. So we need to be as comfortable as possible. The engineers also worked with us in the wind tunnel to help us discover the most aerodynamic positions on the sleds. It’s that attention to detail that’s going to help us win. We compete for hundredths of a second. If we can shave off a hundredth of a second each heat, that’s four hundredths. That’s the difference between gold and silver and bronze and nothing.

You also almost qualified for the 2012 Summer Olympics in weightlifting. How did that come about?

KU: I’ve always lifted, and if I’d known there was a shot of making the Games prior to London, I totally would have gone for it. I didn’t start training seriously until 2011. I was at a bottomed-out place in my life. My dad had passed away, and I had failed at the [2010] Olympics in my mind. Weightlifting was something to remotivate me and a chance to learn more about myself. It’s a great sport, and I’m really glad that I did it.