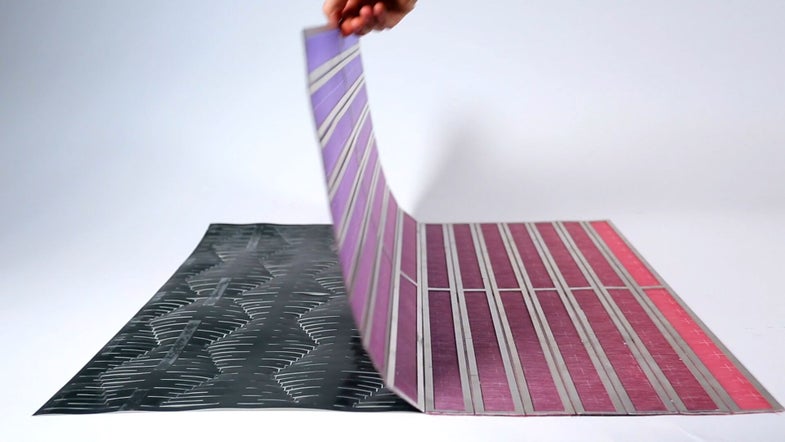 Touching artifacts, in most museums, is not encouraged. And art, on the whole, is not responsive. But from the third floor of the Cooper Hewitt, Smithsonian Design Museum, the view is a little different. From April to October, The Senses: Design Beyond Vision exhibit asks visitors to feel, smell, taste, hear, and otherwise engage with art and design.

It’s a child’s (and perhaps a parent’s) dream—guards are present, but rarely intervene. It’s uniquely accessible to museum-goers who may not have the strongest sense of sight. And it’s a compact, organized glimpse at the future of applied materials, an under-appreciated but consequential field at the intersection of design, aesthetics, engineering, chemistry, and physics.

On my first visit to the showcase, with Carol Derby, the vice president of research and development for materials design and manufacturing firm Designtex, we stopped to pet an undulating wall covered in a dark synthetic fur. As our hands moved up and down, back and forth, and in broad circles, sensors in the fur triggered symphony orchestra music, filling the room.

But Derby wasn’t there to caress a wall—or soak up experimental aromas representing things like “a moment of collective deja vú”—or contemplate consuming wooden chairs and metal ottomans built to look like delectable baked goods. She was there to check in on the Active Textile, the largest working prototype of a new class of materials that respond to environmental stimuli on their own, no robotics involved.

From afar, the Active Textile, which is a collaborative effort between Designtex, the furniture company Steelcase, and MIT’s Self-Assembly Lab, looks like a living organism. It’s built like a Japanese partition—tall and wide, but foldable. The outer layer of fabric is gray, with a gradient running red to blue behind it. For the purposes of the exhibition, the textile is illuminated from behind by heat lamps, set to move rhythmically up and down like a miniature sun.

Unlike traditional fabrics, which would simply sit there, dead and dumb to the surrounding environment, chevron-shaped cuts in the Active Textile open and close in response to the movement of the lamp. As they’re bathed in heat, little wisps open up like a frill-necked lizard inflating its throat. As the light retreats, the fringe tightens up, micro-military officers closing rank. It gives the entire installation a fragile but inviting feeling, like palm fronds swaying in the breeze.

For all the Active Textile’s delicate beauty, the science underpinning the project is a technical mouthful. “It’s six layers,” Derby explains while drinking tea in the Cooper Hewitt museum courtyard. A sheer polyester printed fabric, she says, enhances the lamp’s glow. An aluminum screen gives the textile its shape. And adhesives hold the whole thing together. But the material’s life-like behavior comes from the reaction between the top two strata, a printed face fabric and the low-density polyethylene film to which it is laminated.

These surface layers were carefully selected for something called a “coefficient of thermal expansion,” according to Derby. Every material, from the wood beams in your ceiling to the concrete beneath your feet, reacts to heat in slightly different ways. This happens naturally, all the time, often without our notice.

The true innovation at Active Textile comes from the manufacturing team’s decision to harness this behavior. By laminating two carefully-selected materials with different coefficients together, the production team found they could trigger in the textile a consistent, visible response to heat. On its own, one of those layers might not change much in response to a heat lamp. But taken together, the layers flick open or clamp close as they warm up and cool down.

Skylar Tibbits is the founder and co-director of the Self-Assembly Lab at MIT and the progenitor of the Active Textile project. In 2014, Tibbits presented a TED talk about the future of what he called “4D printing.” While 3D printing emphasizes width, height, depth, or breadth, Tibbits proposed a fourth dimension of time. Materials could be designed to “self-assemble” or otherwise transform after they were initially produced. “This is like robotics without wires or motors,” he told the TED audience. We might one day print and install pipes inherently capable of expanding or contracting according to water flow, he said, or deploy drug-delivery nanobots that assemble themselves. Rigidity, the talk suggested, could soon be a thing of the past.

Basic textiles were a natural proving ground for early-stage programmable materials. “We were making like little small swatches and samples,” Tibbits told me over the phone. They relied on common databases to determine the thermal properties of various materials and tested combinations of various textiles at small scale. The primary goal was gaining new knowledge and creating a proof of concept. “But then the collaboration with Steelcase and Designtex was, ‘Why don’t we translate this to the marketplace?’” Tibbits said.

Together, the three teams narrowed in on the materials they wanted to use for the Cooper Hewitt showcase, as well as smaller but no less important details like color and cut. The cumulative color effect, which to my eyes looked like a fresh plum, is beautiful, but it’s also essential for energy absorption. “All of the different colors of the spectrum will absorb different amounts of light—essentially different amounts of temperature,” Tibbits says. The darker a color, the more light it absorbs; the whiter, the more it reflects. Similarly, the dancing chevrons determined the intensity of the textile’s movement. “Those cuts actually change the geometry,” Tibbits says. “Basically, the longer a beam is, the less force it takes to transform it at the end. If you have long strips, they’re going to be much more active than if you have little small ones.”

Past programmable textile projects have looked like lizard skins, the surface covered in tiny, flexing triangles that respond to light like a Venus flytrap responds to motion. Others, like oversized, rippled fencing masks. While the process of testing such material mixtures is laborious, Tibbits says, thanks to Steelcase and Designtex, the process of constructing them is easier than ever. With an industrial laminator and computer-controlled cutting machines, “we can make it in large quantities, on many different textiles,” he says. “It’s a big leap, in my mind.”

On that hot June day at the Cooper Hewitt museum, Derby looked closely at the Active Textile, noting the subtle changes it’d undergone over the months since installation. “We do see some cases where it’s not folding back into a perfectly flat arrangement,” she said, referring to a few tendrils that stayed open even as the heat receded.

All materials lose their strength and sensitivity over time. Shirts rip. Paint fades and chips. Wood cracks. The Active Textile is no different, though the warping process is sped up in its imperfect indoor display, where harsh heat lamps mimic the gentler passing sun. These imperfections might be frustrating to a theoretical future homeowner, who paid to hang Active Textiles in their windows. But given small deformities are a fact of life, these feel like a reflection of the textile’s fundamental liveliness.

That liveliness is essential to Tibbits’ vision. People used to understand, appreciate, and utilize the peculiarities of natural materials, he says. Ship makers, for example, used wood’s natural propensity to swell to seal the hulls of their boats and lock out water. Yurts, a common type of dwelling in Central Asia made of wool, held in heat over the winter and breathed easy in the summer. “We’ve kind of lost a lot of that knowledge,” Tibbits says. “Now, we tend to throw robotics at it.”

By eschewing screens and wires, Tibbits has used the most modern technology available—like those laminators and cutting machines—to create decidedly simple materials. In the process, he and his collaborators are blurring the boundaries between the nostalgic and the futuristic. “A lot of those older or craft-based [forms of] knowledge of how material will respond [can] solve a problem for you,” Derby says.

A programmable textile probably won’t be in our homes or offices anytime soon. Designtex, Steelcase, and the Self-Assembly Lab say there’s more to do to refine these materials—and find an appropriate market. In the months and years to come, the lessons learned in the production of this prototype may be channeled into a responsive shade, clever privacy screen, or some other object that hasn’t even been dreamed up yet.

Standing in front of the Active Textile, resisting the urge to touch it as it waves its carefully-crafted tentacles at me, I find myself hoping for some third application—an unknown, interactive wildcard.