How to Construct the Lightest, Most Open Olympic Stadium Ever Built 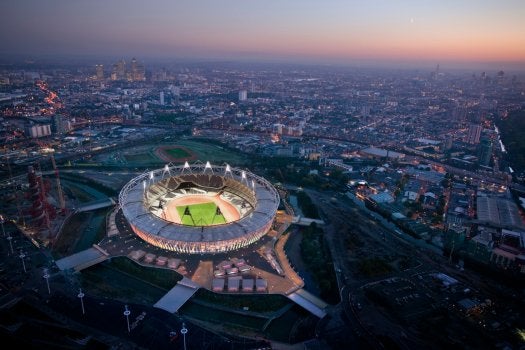 If you’re hoping for a new version of the Bird’s Nest, the Olympic stadium that wowed spectators in Beijing in 2008, then you’ve come to the wrong games. For this year’s Olympics, beginning tomorrow, London went subdued. Critics have described the new Olympic Stadium as “a bowl of blancmange” and “pretty underwhelming,” but its design is highly intentional: London’s Olympic Stadium is the lightest, most flexible and most sustainable ever built.

Olympic stadiums have typically been grandiose palaces of concrete and steel, built to last forever—even if their original purpose doesn’t last longer than two weeks. Beijing’s Bird’s Nest is designed to last for 100 years, but London’s is proud of its temporary nature. Even the bolts holding the steel together aren’t covered up, since they’ll just be removed anyway.

But the designers had make sure the structure had all the benefits necessary to keep the playing conditions perfect for the athletes. By using wind tunnel testing, computer models and unique fabrics, the temporary stadium for the London Olympics plays like a permanent structure–even though it’s anything but. 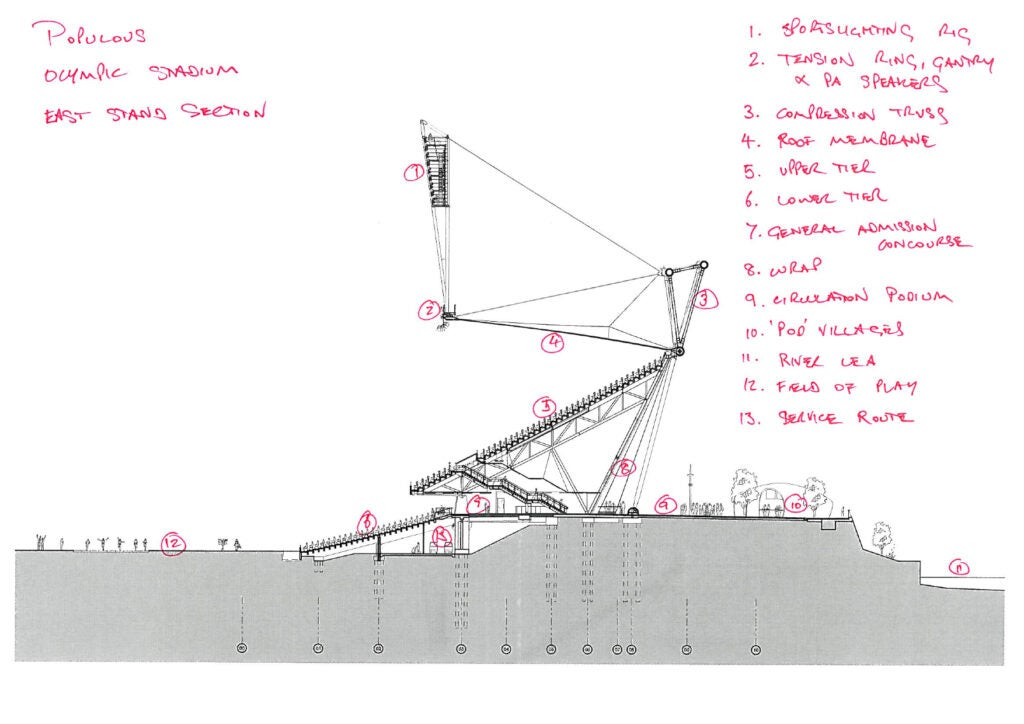 Here’s an architectural drawing of the Olympic Stadium stands, roof, and lighting fixtures that rise above it all for easy television viewing/filming.

From Montreal in 1976 right up through Sydney in 2000, Athens in 2004 (the high cost of the Olympics have been credited with some of the financial troubles there), and even the 2008 Bird’s Nest, Olympic stadiums sit mainly unfilled: uncomfortable examples of one-time-use construction. In keeping with the theme of a sustainable 2012 Olympics, designers embraced the idea of a temporary stadium.

The stadium was designed by U.S.-based firm Populous. With the restrooms and concessions placed outside the main stadium, unlike permanent structures, and covered by a fabric façade, the black and white no-frills structure looks ready to host track and field events but little more–it will be the venue for running, walking, throwing, and jumping sports, but nothing else.

“The agenda for London 2012 was very much looking at pushing forward environmental design and sustainable approaches to major stadiums,” says Tom Jones, a principal architect on the project. “The drive was to construct a small, compact, lightweight stadium.” 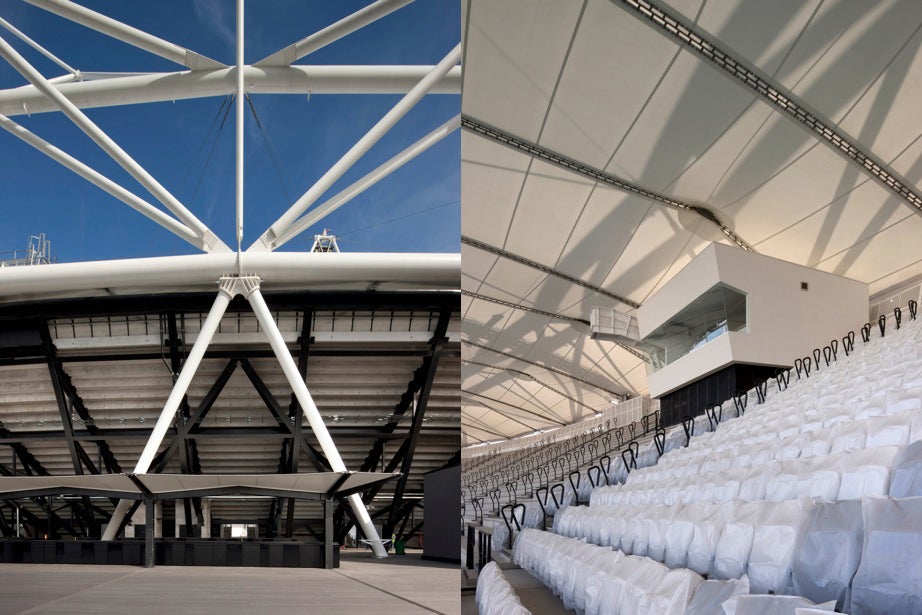 Left: the recycled steel that makes up the roof structure. Right: the fabric stretches between the steel roof supports.

Populous created a basic oval-shaped structure, 3,000 feet in circumference, with a short fabric roof–in fact, the roof is incomplete, in that it does not cover the entire stadium.

Construction on the Olympic Stadium began in 2007. At $785 million, its building cost was less than half the price of today’s top-level football stadiums in New York and Texas. The result was a structure using 10,000 tons of steel. In contrast, the Bird’s Nest used 42,000 tons. Slated to seat 80,000 spectators during the games and to scale back to just 25,000 for its post-games life as a sports and community events venue, the stadium will be only the third-largest stadium in Britain. Its base level, which will be its only level after the Games, is constructed of low-carbon-dioxide concrete–“low” meaning it contains 40 percent less than regular concrete. 800,000 tonnes (that’s 881,849 American, or “short,” tons) of dirt was hauled out of the location’s ground, to a depth of 20 meters.

The stadium was constructed using more than 50 percent recycled materials, including former gas pipes surplus from the North Sea Gas Pipeline project, making up the roof support. In the end, the stadium is 75 percent lighter than if it used traditional materials. 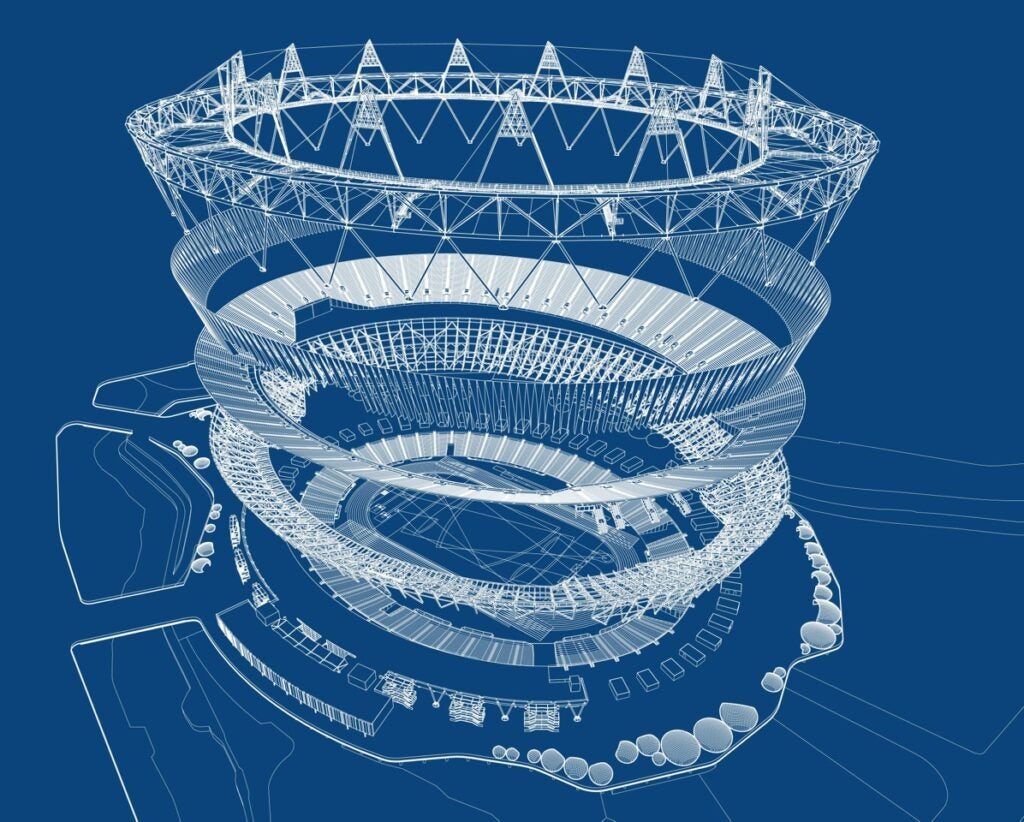 The different components of the Olympic Stadium, separated.

Olympic stadiums typically have completely or mostly covered roofs, but that wasn’t an option for the temporary London stadium–it’s hard to break down a stadium when it’s got a gigantic cement or metal roof on top. So the designers experimented with different kinds and degrees of openness–but too much openness makes it susceptible to wind (partly exacerbated by the water surrounding it), a major no-no in the Olympics.

To make the stadium easier to whittle down, Populous’s architects created a Lego-like modular structure wherein the roof, outer bowl, inner bowl and ancillary support pieces (restrooms, concessions, etc.) are all independent of each other.

“We could take the roof off, take the seating bowl out or break it down into smaller elements,” Jones says.

“We had a lot of debate on the roof cover and the work needed there.” But it wasn’t as simple as tossing a massive canopy on top of a concrete bowl, fully enclosing the track and protecting it from the elements as seen in recent decades of stadium construction. With a modular makeup, there was no way to even build a typical façade—commonly used to enclose the seats and amenities and protect the interior from the wind—let alone offer up a massive roof to shield the playing surface.

“We looked at what happens if we have no roof or very little roof,” Jones says. “Physical models and computer simulation showed that the wind patterns weren’t going to be acceptable for a major championship. Then, really, the next question was ‘How much roof do we need?'”

To devise the actual makeup of the roof, the team went through several versions–early mockups of both a modulating hinge and a basic cantilever were nixed, mostly for budget and sustainability reasons.

The final iteration comes in the form of a compression truss system—a triangular form common in bridges that uses limited materials and compression forces to give strength to the overall structure—holding a fabric covering.

Populous wanted a new fabric that met the performance requirements of fire codes and strength needs, but also fit in with the sustainability initiative. The architects commissioned 275,000 square feet of one-millimeter-thick fabric made of polyvinyl chloride (PVC)-coated polyester and specially designed for the Olympics by Serge Ferrari. It contains less PVC than a traditional roof covering, upping the sustainability quotient further. And it can support the weight of 34 double-decker London buses.

The roof looks, and behaves, like the spokes on a bicycle. The compression truss system circles the stadium with tubular-steel components connecting to an interior cable-net ring with steel cables that hold the fabric tight. “Each spoke is slender, but with strength because of the system in which they are held,” says Jones. The entire lightweight self-stable structure contains 28 roof column bases holding up a 260-meter-wide by 310-meter long steel compression truss and 6,000 meters of steel cable. 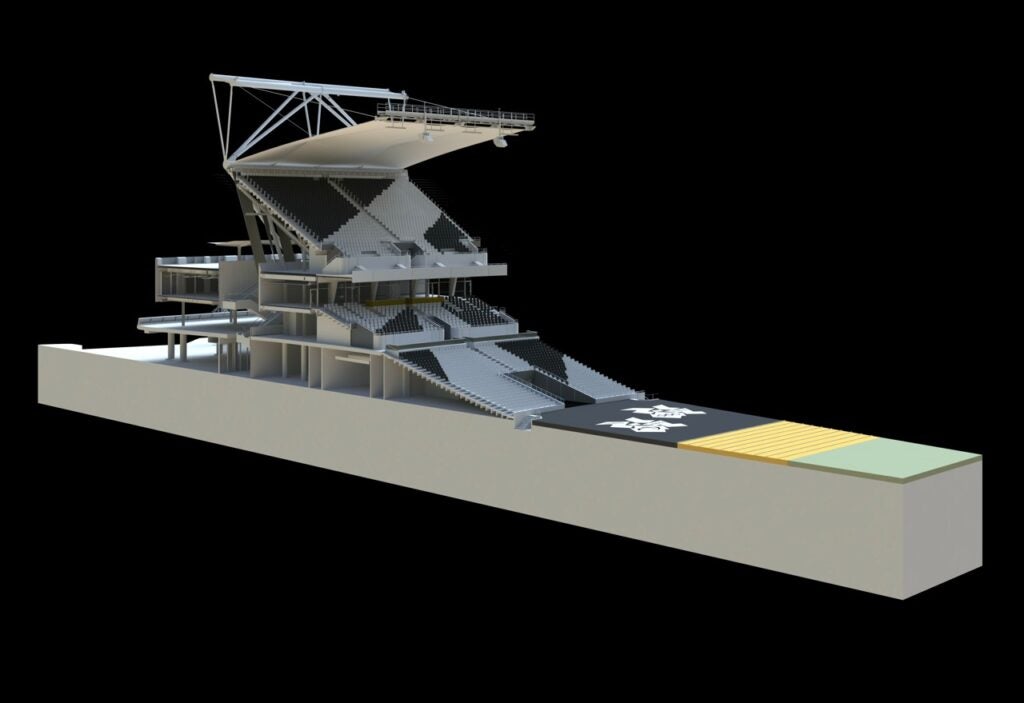 This architectural model is designed to gauge how the roof impacts wind within the stadium.

Even with a near-final design in place, there were adaptations needed along the way. The concessions, restrooms and other components normally embedded into the façade were pulled out and placed around the outside of the structure in a layout described as “separate villages.” After doing performance checks with all these pieces in place, the team found that prevailing winds heading in the southwest whipped straight into a weak spot, a 10-meter-wide tunnel that served to bring the elements into the stadium—whether for the opening ceremonies or the track and field events—and right to the end of the 100-meter finish. To fix the glaring issue, designers erected a concrete wall, the only suitable budget-friendly solution for the ground-floor wind entrance in such a tight timeframe.

Any wind whipping into the stadium at more than two meters per second would invalidate all running and jumping records; it doesn’t even matter from what direction the wind comes. Organizers of major events don’t want that. Especially at the Olympics.

By using both miniature physical architectural models in wind tunnel tests and wind speed analysis tests on computer-based computation fluid dynamic modeling, all hinged on historical weather data, the team scaled back the design for the roof to the point where the “probability of wind speed was found to be acceptable.” (That probability, by the way, comes out to a 5 percent risk of score invalidation by wind.) The result leaves the roof covering about two-thirds of the seats. Any smaller, and it’d let in too much wind. The design couldn’t really be altered that much to redirect the wind in any fancy ways–since the roof will be dismantled and then reassembled after the games, it had to be fairly simple.

Another essential part of the anti-wind efforts is the “wrap” around the outside of the stadium, which is actually 336 strips of fabric, similar to the fabric used for the roof. Each strip is 82 feet tall and eight feet wide, and features a 90-degree twist at the bottom to allow spectators to enter the stadium. (This wrap was actually almost cut from construction for budget reasons, which would’ve thrown all of the wind calculations off. Luckily Dow Chemical offered to pay for it, in return for some advertising.)

Some have argued that the stadium is uninspiring, though it has been shortlisted for the 2012 Stirling Prize in architecture. It’s also undergone a fierce and controversial bidding war for use after the Games–several soccer teams and universities have entered bids, been accepted, been rejected, gone to court, and fallen through in the past few years. Currently there are four pending bids: the West Ham United Football Club, a company bidding for the stadium to be used for F1 racing, the Leyton Orient Football Club, and an affiliate of Bucks New University. The decision for its use will be made in October–unless it’s delayed again. West Ham was approved back in March 2011, then a scandal erupted due to an employee of the Olympic committee having a relationship with an employee of West Ham, then there were negotiations with the Mayor’s office…by October of 2011, West Ham’s plans to buy the stadium collapsed. But the club is still one of the major bidders to rent it.

“I think the approach to stadia has been very interesting,” Jones says. “In some respects, Beijing was a high-water mark in unlimited materials and huge permanent stadiums. London changes directions, looking at more responsible design.”