From optical tweezers to multiplexed cell imaging, this is what it takes to break through. 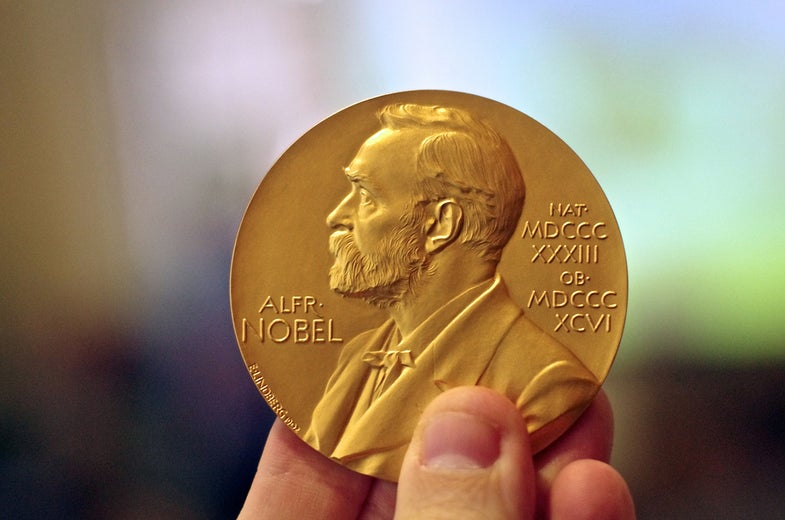 Each Nobel Prize-winning discovery is a long, arduous, collaborative process requiring many years of work, and many minds working together.

But researchers don’t, in the words of Isaac Newton, stand on the shoulders of giants alone. They also wield impressive machinery to help them see better, track outcomes more precisely, or process data perfectly. These are the tools that enabled the 2018 Nobel laureates to go for gold:

This year’s Nobels were, in the words of PopSci‘s own Charlie Wood, “a rare nod to technology over fundamental physics.” The three winners—including the first woman to win the prize in physics in 55 years—are master light manipulators.

Arthur Ashkin found a way to stop and hold an object in the ray of light. (Similar, Wood notes, to the fictional Star Trek tractor beam.) Ashkin’s very real “optical tweezers” essentially trap tiny particles or diminutive bacteria in its path. When the laser moves, the stuff inside moves with it. NASA hopes to use the technology to trap and analyze space dust or cosmic ice crystals.

Gérard Mourou and Donna Strickland, meanwhile, found a way to amplify a laser without destroying the machine generating it. By stretching the laser out with a fiber optic cable and later compressing it together again, they could deliver a short concentrated pulse. They published their results in 1985, and the “chirped pulse amplification” has been used in numerous technologies since, from cutting metal to correcting vision.

Just a half-century ago, it’s worth noting, none of this would have been possible. While scientists had been experimenting with cathode rays and x-rays and other concentrated light since the late 1800s, the laser (or “light amplification by stimulated emission of radiation”) was only invented by Theodore Maiman in 1960.

James P. Allison, a harmonica-playing Texan, is one of two scientists honored this year for his role in using the human immune system to fight cancer. In the 1990s, he pioneered the basis of immune checkpoint therapy, which helps the immune system register cancer cells, and give the body a better chance to fight back.

Allison’s early workbench was rudimentary by the standard of today’s biotechnologists. His 1996 paper describing a ground-breaking immune “blockade” primarily namechecks mice, the biological materials under analysis, and perhaps a needle or two for injection. But today, Mt. Sinai oncologist Miriam Merad says, scientists working on similar problems have dozens of tools at their disposal.

Merad, for example, harnesses a suite of “single-cell technologies”, which allow her team to analyze one cell at a time, instead of denser, more complicated tissues made from many cells. In the process, researchers have uncovered new information about the most minute cell behaviors, and the variability between cells. Multiplexed imaging, which layers many images together to create higher-resolution visualizations, is one revolutionary tactic. One day, 3D renderings of everything from cells to full-blown tumors could be available to all oncologists.

In the future, Merad says, she hopes for a implantable device that can track a patient’s immune system responses in real time, without hurting them. For his part, Ilya Shmulevich, a genomics expert at the Institute for Systems Biology, is betting on advancements not just in data collection, but in its management. “Indeed, bioinformatics tools today are needed to integrate the massive amounts of data that can be collected from a patient,” he wrote via email. “I believe we need to develop computational models of the tumor microenvironment so that these models can be used… to identify the optimal drug or combination of drugs.”

A trio of scientists shared this year’s Nobel for chemistry for creating new proteins, some of which could improve health or fight disease, and others that reduce the environmental impact of everyday manufacturing techniques.

Notable among the honorees is Greg Smith, who in 1985 invented a technique for developing new proteins called phage display. Now common in many laboratories, phage display is a many-step process for handling some of the most minuscule materials around. But it requires only the most fundamental modern chemistry tools—or, frankly, kitchen equipment—around: water, a special plate, and a dish.

The first step in the phage display is to insert promising proteins or genetic material into a microtiter plate. The recognizable, many-welled tray for conducting chemical analyses was created in 1951 by a Hungarian doctor. But it only became popular—and mass-producible through a mold—in the 1980s.

From there, scientists add a bacteriophage (that’s a virus that invades bacteria) and force the DNA or other materials to express themselves. The concoction is poured into a dish—yes, a dish—and the materials left to bind. When they wash the dish in the lab sink, only the targeted materials should remain on the plate. The remnants can be manipulated and magnified as needed, everything still needs to be sequenced and analyzed, and of course you need skill, creativity, and good luck to go from dish-washing to a new life-saving drug. But those three tools, in the Nobel Prize committee’s words, formed the basis of “a revolution based on evolution.