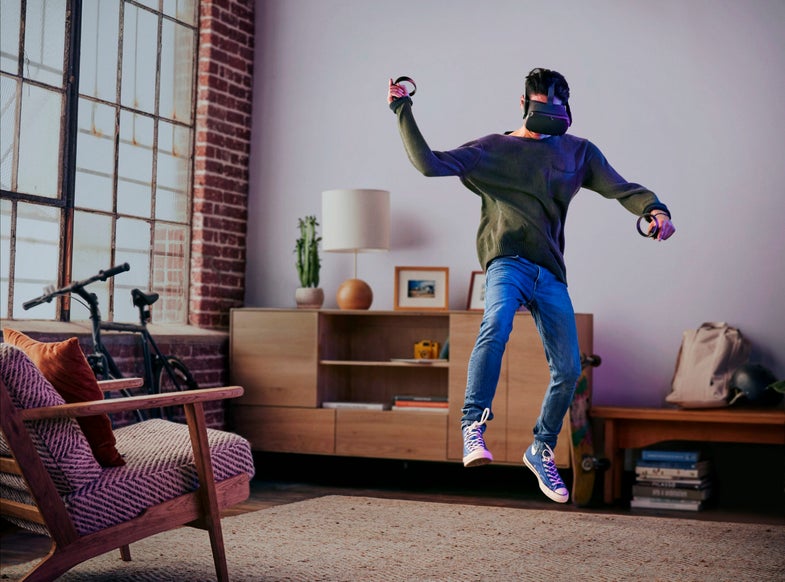 Yesterday, Facebook and Oculus announced a new self-contained virtual reality headset with a killer feature: the ability to map the room around you. The device, called Oculus Quest, uses four onboard sensors to understand what the surrounding environment in the real, physical world looks like. It can track your head’s position in that landscape.

This isn’t the first VR system to do something like this: Oculus Rift, which requires a powerful PC to operate, uses separate, external infrared LED sensors to track your motions. The Quest does something similar, without the need for a PC or those separate sensors.

Here’s how Oculus Quest fits into the VR landscape, and how it works.

It’s a big step up from the Go device

The Oculus Quest follows another self-contained VR device from the company: the Oculus Go. That headset, released in May of this year, is a gadget that doesn’t require a computer to run, but lacks awareness of where it is in a room. (Its catalog of content is also limited compared to the traditional Oculus selection because the Go can’t handle the processor-heavy games.)

The result is that the Go is a great device for using while sitting on a couch and watching a video, playing a game, or riding a virtual roller coaster (if you aren’t too prone to nausea). Strap it on your face and peer around: if you’re looking at a desert scene, for example, as you pivot your head side to side and up and down, you’ll be able to check out the natural setting, almost as if you were there—but just sitting in one place.

The result is an immersive experience, but since the headset doesn’t know where it is in the room itself, you could stand up while wearing it and walk into a wall or trip over a coffee table. (Don’t do that.) The virtual landscape won’t adjust as if you’re walking through it as you move around the real world; thus the wear-it-on-the-couch idea.

The Go, which costs $199, also comes with a hand controller—a small grey gizmo that provides a way to aim a virtual gun in a zombie shooting game, for example, and pull a trigger. But that device only lets you do so much; it doesn’t provide a true sense of “hand presence” (the ability for your virtual hands to mirror what your real-life hands do) the way high-end hand controllers with the Rift do.

Of course, there are competitors to the Oculus devices: The HTC Vive VR system—which, like the Rift, requires a computer hook-up—can also track where you are a room, and its Vive Focus standalone device, designed specifically for use in China, does have inside-out tracking capabilities too. (And the poorly-reviewed Lenovo Mirage is a free-standing VR headset that can track you within a small space.)

The Quest is a significant step up from the Go because it can figure out where you are in the room; it’s aware of the physical context. To do that, it relies on four sensors on the outside of the device near its corners, plus computer vision, to sense the space around it; they call the feature powering this Insight.

“It uses the four wide-angle sensors on the headset to look for edges, corners, and pretty much any distinct feature in the environment,” Hugo Barra, the vice president for VR at Facebook, said on Wednesday at the annual Oculus developers conference. “It then builds a three-dimensional map that looks like a sparse point cloud.”

“The system combines this map with gyroscope and accelerometer input, and generates a very precise estimate of your head position every millisecond,” he added. Oculus advertises the headset as having six degrees of freedom, meaning that the system is tracking your head as it move left, right, forward, back, and up and down.

All of this means that VR experiences with the Quest can happen not just in rooms that you can move about (in real life and in the virtual one) but in larger settings, too, untethered to a computer.

And unlike the simple controller that accompanies the Go device, the Quest includes hand-held units that provide hand-presence, so your virtual hands move around in the virtual space as you move your actual hands; you can use them to roll a virtual bowling ball, for example, or swing a tennis racket. Like the Go, the Quest has audio built into it too, and the company says that it now packs in better bass.

The Quest will cost $399 when it goes on sale in the spring. That’s twice the cost of the Go, and the same price as the Rift—but the Rift requires a computer to run.