The highest levels of athletic competition need the highest-tech tools 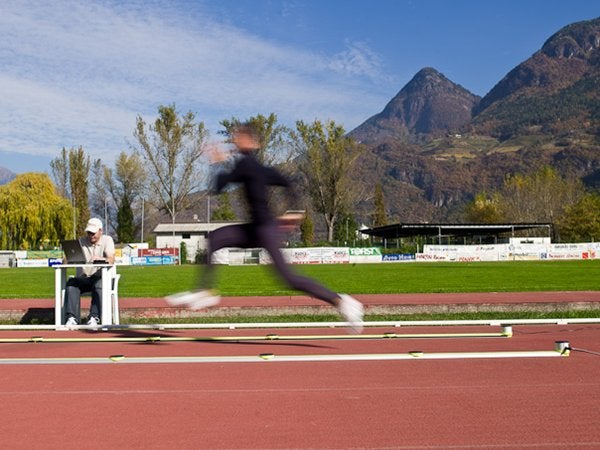 By almost any account, the 2012 Olympics will be the most high-tech ever, from the actual starting guns to the microsecond camera finishes. But the pre-Olympics are even more high-tech, as athletes increasingly turn to advanced video and biomechanical data analysis to track their performances and train more efficiently.

Many of these systems are in the hands of Phil Cheetham, the chief technologist for the U.S. Olympic Committee. A former Olympian himself — he was a gymnast on the Australian team in the 1976 Montreal Games, and would have gone again in 1980 if it weren’t for the Moscow boycott — Cheetham has spent the better part of 30 years as a sport biomechanist, helping golfers and discus throwers improve their moves. He co-founded two biomechanics firms, including a company called Advanced Motion Measurement Inc., and has worked for Titleist and others before starting his current role at the USOC.

Based at the Olympic Training Center in Chula Vista, Calif., he is using an LED beam-break system, body-based sensors that track rotational speed, even a radar-like laser ranging system to measure speed. With these systems, USA Track & Field athletes can see biometric data instantly, using computer-calculated speed and rotational data to make tiny tweaks to their hammer throw or pole-vault leaps.

But when it comes to training with technology, the U.S. is surprisingly far behind — other countries have been using these systems for a few years now, while Cheetham’s job has only existed for a year and a half, he said. The USOC has only two sport technologists total. “I got there, and we virtually had no equipment,” he said.

PopSci talked to Cheetham about technology-based training before he got on a plane for London.

**PopSci: How does motion-tracking help you improve an athlete’s performance?

Phil Cheetham: If we can measure performance, we have a better chance of improving it, because we know what we are trying to improve. We have a benchmark. With track and field, that’s generally velocity, and also how symmetrically they run, how much time they spend on the ground and in the air and what their stride length is. That’s called the stride rate. That can give us some invaluable information. For instance, if they spend a lot of time on one side of the body, maybe they’ve got a recipe for an injury. Effectively what that means is they’re running with a limp. Is it a muscle weakness, a pain, or something else?

I’m trying to spoon-feed coaches with a sugar-coated spoon to add data.

PS: So can these measurement systems pick out something a coach wouldn’t notice?

PC: That is really important to note. Every technology we use, we use it alongside video. When we see a measurement of some kind, we use it along with video. Then the coach could go look — was the velocity too much, was the takeoff angle too steep or too low? The coaches get the hang of it very quickly. We can get those measurements on the spot. The coaches don’t necessarily need to understand the technology — they just need to understand what they need to change after we tell them.

PS: How do you get coaches on board with using biometric data?

PC: I’m trying to spoon-feed them with a sugar-coated spoon to add data. If you throw a bunch of graphs at them, they just glaze over. We’re trying to make it so the coaches are the filter. We try not to go directly to the athlete — we want the coach to see the data, interpret it in their own mind, and turn it into coach speak, coach-ese. They may say, ‘Put your step out a little further,’ or even turn it into drills. It may turn out the athlete needs to be more powerful in the core, so coaches may design a program to take advantage of that. That’s where the coach comes in. We’re trying not to be coaches — we’re trying to be a service for the coaches.

PS: What are some of the tools you’re using to do this?

One piece of equipment we use is the AMM Sensor [developed by Cheetham’s company, Advanced Motion Measurement Inc.]. It measures rotational speed, and we use that for the javelin, discus, and hammer throw. The nice thing about it is it’s wireless, and it’s the size of one of those little soap bars you see in a hotel. We connect one on the hip and one on shoulder, and it can detect rib cage or upper body rotation.

This measures the kinematic sequence — the sequence of efficiency. When you are generating energy in a rotational throw, or a golf swing, you have to generate speed first through the lower body, up through the torso, through the arm and finally through the implement. If you get the sequence out of order, you are not capitalizing on your full potential. Your hips are like the first gear of a stick-shift car. They’re powerful, but not as fast. The upper body is second gear, your arms are third gear and the implement [the javelin or golf club, etc.] is fourth gear. Each one gets faster and faster, but with less power.

With this technology, we can tell them, you are not getting any increase in speed across your shoulder, etc. We can start to diagnose where the issue is. That not only helps us from the point of view of performance, but reduced injury risk as well. 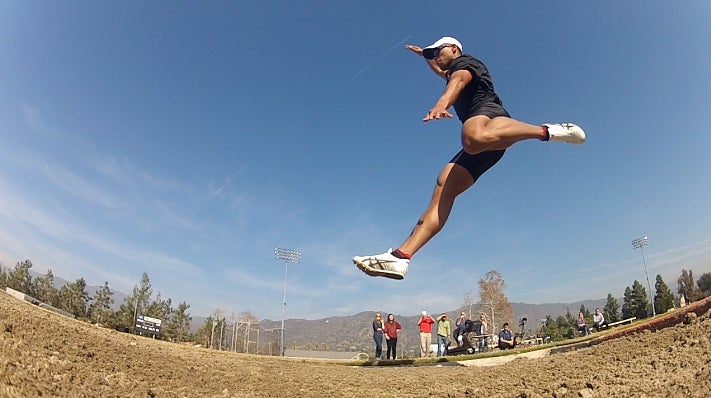 Decathlete Bryan Clay worked with BMW to track his velocity while training for the 2012 Games. BMW’s system tracks the white hat to capture his velocity, height and other parameters for the long jump.

PS: How do you measure speed?

PC: We have been working with BMW, which is a corporate sponsor of the USOC. Besides just money, they wanted to help out with some technology. They purchased a 3-D camera — it’s kind of like the Kinect, but a more expensive version of the Kinect. It would tell you where in the image something was. The first application was to track the runner in a long jump takeoff. They made it able to track the white hat he is wearing — not the elbows, not the legs, which are variable. By tracking the white hat, it would tell us at the instant of takeoff what the horizontal and vertical velocity is, and that’s instantaneously overlaid on a video.

We use something called the Optojump for takeoff and the 20-meter sprint. We have 20 individual one-meter strips, with LEDs on one side and photosensors on the other side.
We lay them down in a corridor on the floor that the athletes run through. Every time they put their foot on the floor, it breaks the LED beam — it’s like in a security system. You put your foot down, and X number of LEDs may be broken for X many milliseconds. Then it can calculate your stride length, how long you’re in air, how long you’re on ground, and one side of the body compared to the other.

We use a laser system made by Jenoptik, which goes behind the athlete, and they run away from it. A laser bounces a light off their back, and it comes back to a receiver to measure the time it took — consequently we measure how fast they’re going. It’s radar principle. It gives us velocity profile, which tells us how fast they’re accelerating.

PS: What other sports can take advantage of these systems? Is it just track & field?

PC: Several others can use it. We are divided into groups with four or five sports, our sport portfolios — or ‘sportfolios.’ So I have track & field, swimming, equestrian and shooting. Since I’m at Chula Vista and the track & field athletes live here, my primary responsibility is track & field. But I also work with swimming, and we use the high-speed video there also. In swimming, they look at stroke lengths and stroke rates, how long and how fast. BMW is coming up with some similar technology to use the 3-D camera, or a regular camera, to do some of the same thing.

Right now my daughter is competing in trampoline — she took bronze in her age group [in early July]. What they need to do is change their time in the air. One way of figuring out how high you go is to measure the time it takes you to do your full routine, which is 10 bounces. We have photocells under the trampoline. When you push it down, you break the photocell beam, and when you go up, the net comes up and the beam is connected again. That can tell how long you’re in the air. They get a score for total seconds in the air, and add that number to your other score. So if you are one of the athletes who can jump high, they have a huge advantage.

PS: Is there more of this in use now than in prior Olympics? Is it changing the way athletes train?

PC: Oh yes. We’re not allowed to use this technology in the Olympics, but we are using it for preparation. In the Olympics, they don’t even want us to videotape, but you can certainly use all of this to get ready. With wireless video, things like Facetime, we’re using video all the time. It’s revolutionizing the way coaches can coach athletes. Athletes travel a lot, but their coaches cant always come with them. Now all they need is a camera and Dropbox, and boom, the coach can critique it.

Quite frankly, a lot of the other countries are ahead of us. A lot of them are funded by their governments, and we’re not, so funding is definitely an issue for us.

I think we’re on the cusp of the change. It may be more engrained in the European and Asian countries, but if you’re a top coach and you’re not using high-speed video, you’re missing out. The main reason they haven’t used technology in the past is it’s been too difficult and too expensive. But now, with Bluetooth and cell phones and iPads and Galaxy tabs, and the sensors are becoming more and more wireless… The data by itself is difficult to interpret. But if you have it with the video and you can see what is happening, you don’t need an interpreter anymore, a biomechanist or a technician or a scientist.

I don’t want to put myself out of a job, but I think there will just be more to do. It will be more ubiquitous.