Here's the latest progress on the X-59 QueSST, an aircraft in development from the space agency and Lockheed Martin. 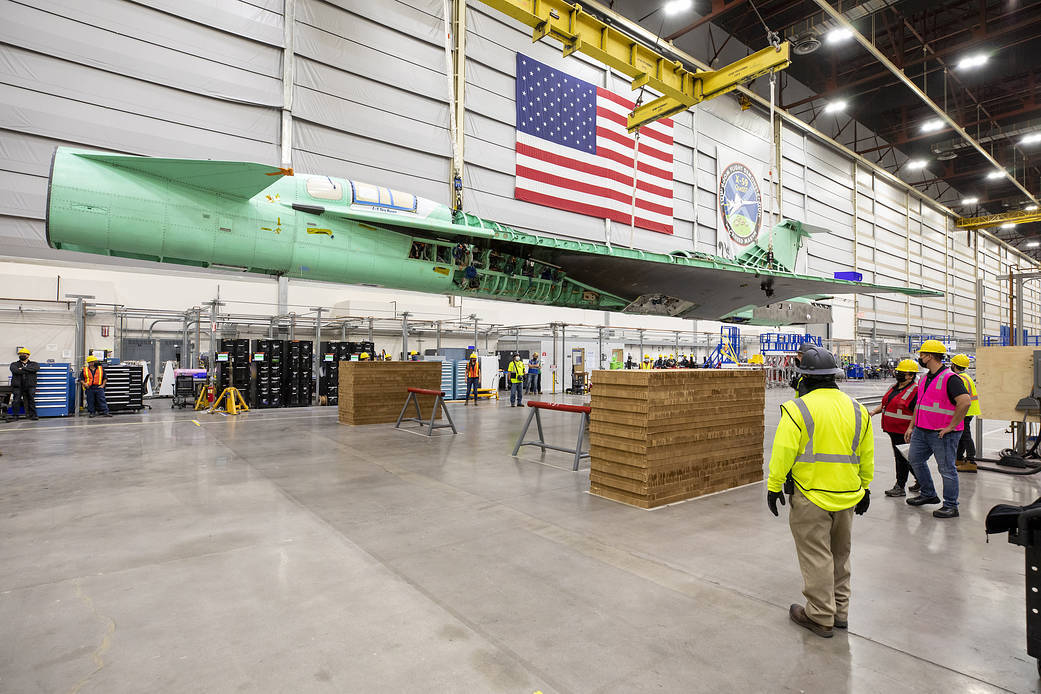 This year could be a big one for a unique aircraft called the X-59. The plane is a collaboration between Lockheed Martin and NASA, intended to break the sound barrier as quietly as possible. The space agency recently shared a picture of the flying machine wrapped in a pretty blue covering—complete with a red bow on top—from when it was prepped to move from California to Texas. It’s currently in the Lone Star State for structural testing.

The plane could make its first flight this year in the late summertime out of Lockheed Martin’s Skunk Works facility back in Palmdale, California. In two years, NASA says that their test pilots will fly it around and measure the noise it makes and how communities below react to it. Ideally, when it breaks the sound barrier, it will create a sound that the space agency refers to as a “thump,” and not a boom. That reduced noise signature may lead to a change in regulation to allow for supersonic flight over the US, a type of travel that’s currently forbidden.

The X-59 QueSST—a mashup of Quiet Supersonic Technology—made the trip from California to a Lockheed Martin facility in Fort Worth, Texas, to undergo what’s known as a proof test. “The airplane has been designed with some fairly sophisticated tools,” says Walt Silva, a senior research scientist with NASA and the program’s structures lead. “And so now that it’s built, the goal really is to prove that it can handle the loads that it’s going to encounter during flight.”

“You want to do that on the ground,” he adds, “to make sure that the structure is worthy and sound.”

The proof test process also gives them a chance to gather data. “That data is used to make sure that it compares well with all the computational models that have been used to date to design and build it,” Silva says.

To carry out the proof test, the X-59 will be on a large, rigid structure, and hydraulic jacks will apply loads to the aircraft in a programmed way.

The airplane sports several distinct features that you don’t see on military aircraft like traditional fighter jets or commercial planes, either. Like Pinoccio when he’s told a fib, the X-59 has a very long nose. Measuring about 38 feet in length, that nose “will be essential in shaping shock waves during supersonic flight,” NASA said in a statement from September of last year, when it revealed an image of the nose set in front of the rest of the flying machine. Managing those shock waves is important in preventing the typical sonic boom sound—the goal is to have the plane be as sleek as possible to minimize disruptions to the air around it. One General Electric F414 engine will power the bird.

But the most mind-bending feature is that instead of looking out a windshield, the pilot (and sole occupant of the one-seat plane) will look at a 4K monitor in front of them. That high-definition display will get its feed from two cameras in front of the plane. Because the nose of the plane is so long, and because its design doesn’t allow for a typical protruding canopy, there is no space for a traditional windshield; the cockpit area is flush within the body of the plane. The pilot still will have glass to look out of in other parts of the cockpit, though. “Our ​​goal is to create an electronic means of vision for the X-59 pilot that provides performance and safety levels equivalent to, or better, than forward-facing windows,” Randy Bailey, who leads the electronic vision project, said in a statement last year.

Stay tuned for news about the X-59’s first flight much later this year. In the meantime, check out a video showcasing a NASA simulator for the aircraft, below.