Pilots will see what's in front of them on a 4K screen. Here's how it will all work. 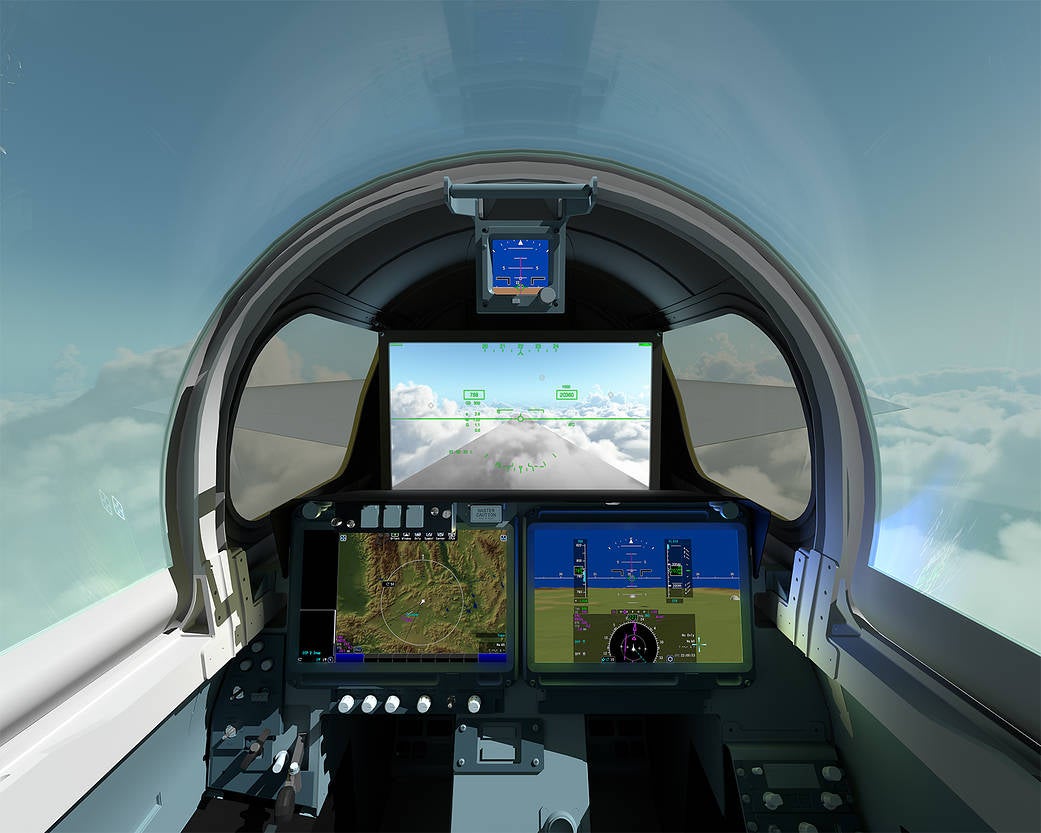 In 2021, if all goes according to plan, NASA test pilots will take an experimental plane with a very long nose and fly it faster than the speed of sound. But the pilot won’t be gazing at the clouds ahead through a window—they’ll be staring at a 4K monitor. Two cameras will pipe real-time video from the front of the aircraft straight to the pilot’s field of view. The in-flight movie for the pilot, the plane’s sole occupant, is the flight itself.

NASA has good reason for this unique set-up. The aircraft is called the X-59, and its creators hope it will break the speed of sound without producing a “boom” sound. If it can smash through the sound barrier quieter than a traditional supersonic plane, then maybe it could cruise over land without disturbing the civilians on the ground below.

So why isn’t there a windshield?

To keep the plane aerodynamic, NASA gave it a very long nose. It’s nearly 50 feet long. If the cockpit canopy were to stick up into the windstream so the pilot could see forward, that protrusion would interrupt the flow of air around the craft. At the same time, trying to build a long, sloping windshield into the nose that a pilot could see out of would be ridiculous. “It would almost be like Wonder Woman’s invisible airplane—that’s what you’d have to build in order to look through that nose section,” says Randy Bailey, the lead at NASA on the plane’s external vision system. The whole nose would basically have to be see-through.

“We don’t have transparent aluminum yet, so we can’t do that,” he adds.

So instead of trying to incorporate a traditional windshield, a high-def camera on top of the nose will provide some of the imagery. Another camera underneath the nose will look downward—giving a view of the runway for takeoff and landing. That cam is just standard-def, and like the landing gear, it can be stowed out of the way when it’s not needed to keep the plane traveling smoothly through the air. When the aircraft is cruising at supersonic speeds, only the one 4K camera will provide real-time visual information to that monitor in front of the pilot.

All the things that could go wrong

One key issue NASA needs to overcome to ensure the system works well is latency—the delay between what the camera sees and what the monitor displays. Too much latency could spark motion sickness, which can occur when your inner ear feels one thing (the actual motion of the jet) but your eyes see something else. Bailey says that they need to keep the latency to under one tenth of a second to avoid any issues like this. Right now, the system’s latency is 67 milliseconds, or .067 seconds—so they’re under the tenth-of-a-second second goal.

“The goal is, if we do it the right way, it will be as if there’s a real window right there,” he says.

A scarier thought is: What if the system breaks, either totally or in part? How will the pilot see?

Turns out, it wouldn’t be catastrophic the same way a parachute failing during an ejection would be. Since there are two cameras, if one were to fail, another would hopefully still be operational—although they look in different directions, so they’re not perfectly redundant with each other. If the main monitor were to break, either of the two displays below it could show the cameras’ view of the outside world. And two computers work together to handle the system as a whole. In short, the system does contain redundancies. “I’m not saying it’s never going to fail,” Bailey concedes.

However, that failure could be okay. That’s because the cockpit still includes a normal transparent canopy over the pilot’s head, as well as two regular windows on either side of the monitor that provide some semblance of a view. Even more important: the pilot doesn’t have to be able to see straight forward to be able to land the plane. The cockpit of this new experimental jet actually is the same as what’s found in the back of a T-38 trainer jet, which has two seats, one in front of the other. Like some F-16 fighter jets, the backseat of the T-38 has all the controls and instruments a pilot needs to fly the plane.

“They can actually land the airplane back there without seeing forward—they have certain maneuvers that they can fly, and guidance information on their head-down displays, that will get them to the runway,” Bailey says. It’s not ideal, but then again, only three test pilots will be flying this experimental craft, and no passengers will be riding along. (And in the world of tricky landings, consider the U-2 spy plane, which needs a chase car to help it get down on the ground.)

The whole point of this aircraft is to see if NASA can gather data that show that supersonic flight can be quiet enough to be acceptable over land—something that private companies are also working on, one of which is even considering using monitors in lieu of passenger windows. If one of those fails, it’s no big deal.