Valkyrie Might Be The Baddest And Most Gorgeous Plane Ever Made 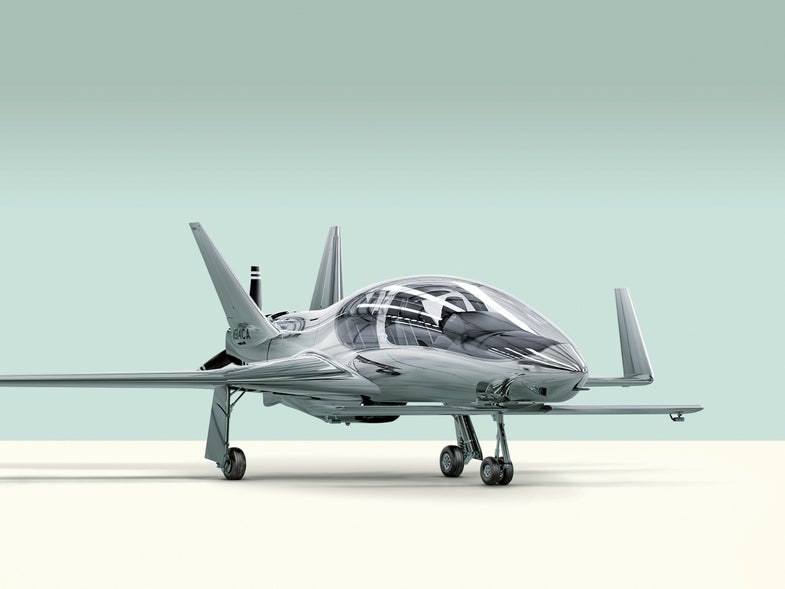 David Loury isn’t a classic-car kind of guy. But when he decided to radically redesign the private plane, he turned to luxury automobiles—and their design-forward aesthetic—for inspiration. “Maserati and Mercedes-Benz were the two main cars I looked at, and I engineered ideas and concepts from them,” says the independent aerospace engineer. Those concepts evolved into the Valkyrie: a five-seat, single-piston-engine plane that he calls a “high-tech vehicle of the future.”

The Valkyrie’s exterior certainly looks futuristic—and beautiful. That’s because Loury designed it to have aesthetic proportions: “a convex profile in the front, a concave one in the back, and an inflection point where they join.”

In addition to looking good, Loury wanted Valkyrie to be efficient and easy to fly. So he gave it a canard, a second wing near the nose that supplies additional lift. This helps make the plane up to 20 percent faster, with less fuel burn, than a Cessna or comparable aircraft.

The canard also makes it nearly impossible to stall—to lose lift in midair. Coupled with simple controls (just one handle-to-handle throttle) and the information-rich Garmin G3X flight-display system, Valkyrie is extremely user-friendly. “When you start the engine, it’s as easy to control as a car,” Loury says. “So even if you are a bad pilot, it will forgive your errors.”

Loury’s startup, Cobalt, plans to start filling preorders for the experimental version of the plane, Valkyrie X, as early as late 2016, and aims to make the consumer version, Co50 Valkyrie, available in mid-2017. The only thing standing between you and a Co50 Valkyrie is the $750,000 price tag. “It’s not cheap to make a plane like this,” says Loury. But he points out the price is only slightly more than similar private aircraft. “Before the Valkyrie, the offerings weren’t glamorous or fun,” he says, “and not nearly worth the effort.”