You'll find some carbon fiber, but only where it counts. 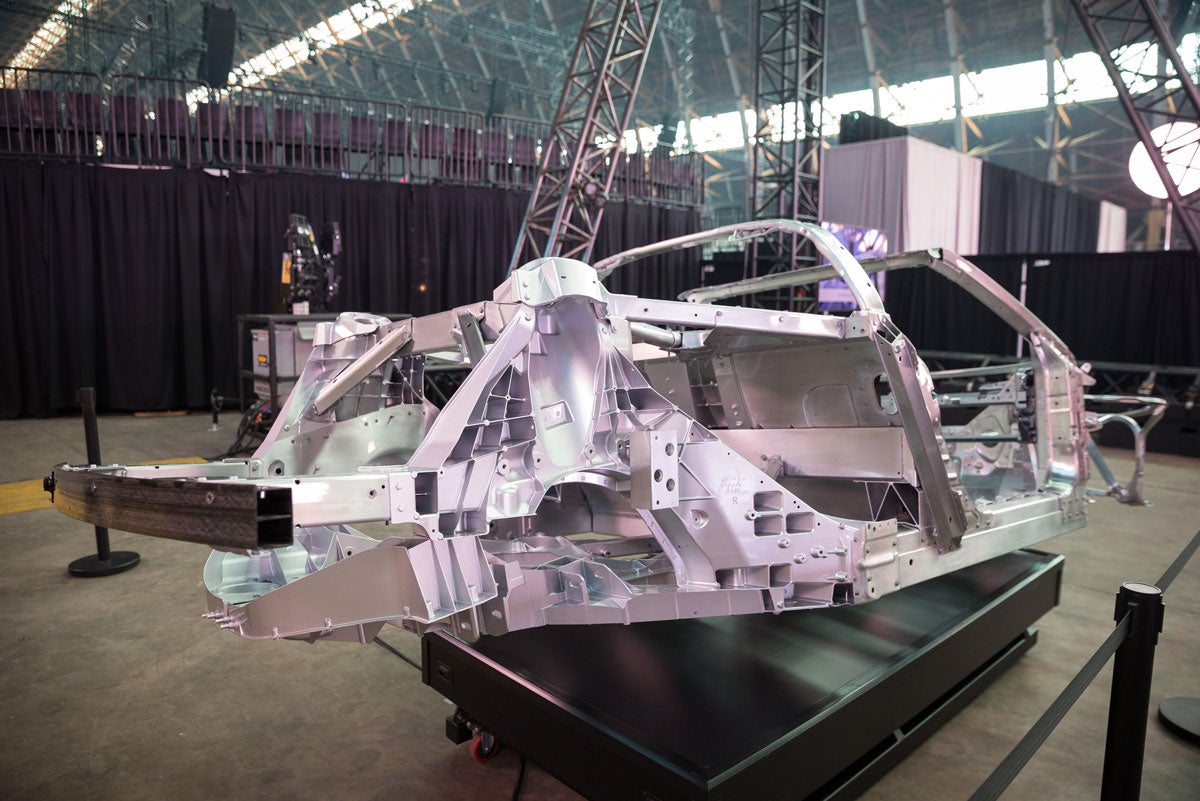 Earlier this year, Chevrolet announced that—after decades of teasing—the Corvette was finally moving the engine behind the driver. Even more surprising, however, was the fact that the mid-engine “C8” 2020 Corvette Stingray will start at just $59,995. That’s an absurdly low number when you consider its competition.

Ford has sold a tiny number of mid-engine super sports cars with an impossibly short list of vetted buyers, with the cars priced at more than half a million dollars. Traditional competitors in the mid-engine segment like Ferrari, Lamborghini and McLaren have models starting at around a quarter-million dollars. Upstart Audi has been a competitor in this segment for a decade or so, and the buy-in for an R8 starts at $171,000. Acura’s NSX starts at $159,495.

How is it even possible to build and sell an aluminum-intensive mid-engine sports car at a price that is an incredibly small fraction of the existing models?

Making things even more complicated, Chevrolet had to solve this problem on a totally different scale than other manufacturers in the space. Companies like Ferrari might build about 5,000 cars per year. Last year, Chevy sold 40,000 Corvettes, and the new one will surely be a hot property with even more demand.

“When you get to that volume, it gets more difficult,” acknowledges Ed Moss, Corvette structures engineer. Making a car that could hit that low price point at such high volume required careful selection of materials and processes.

For the 2020 Corvette, GM carried over its backbone chassis configuration, which features a central structural tunnel. Now, however, the engine sits behind the driver, to create a layout similar to that of the old Lotus Esprit and the DeLorean DMC12.

But those were steel cars. The Corvette employs complex, thin-wall aluminum vacuum die-castings at the corners to support the suspension mounts and then connects them with Tinkertoy-like aluminum extrusions that are “glued and screwed” into place, said Moss. There are six large castings at the car’s corners, plus two more for the halves of the engine cradle. In total, the car has 20 castings.

The thin-wall technique produces parts that are between 2.5mm and 3mm thick, compared to a thickness of between 5mm and 6mm for castings used on the C7 Corvette. This technique permits consistent dimensional control during assembly, ensuring consistency for the cars.

Aston Martin used a similar design for the ‘Vertical-Horizontal’ chassis in its previous generation of cars like the DB-9. The basic layout could stretch or widen for different models by changing the lengths of the extrusions.

The previous-generation ‘C7’ Corvette had an aluminum chassis, but that one was MIG (metal inert gas) welded rather than glued-and-screwed. The advantage of gluing is the strength of a bond over the continuous length of the joint rather than just at the welds. “The C8 has more than 100 meters of glue,” Moss pointed out.

The result is an open-topped chassis with no roof structure between the windshield header and the hoop behind the doors, which makes it easier to includ a removable roof panel. More importantly, the structure is 25 percent and 30 percent stiffer than two open-topped competitors in the segment, according to Moss.

“The trick for torsional stiffness is that you’ve got to get the load through the tunnel and back to the shock towers and it is hard with the engine there,” Moss said. The car’s central spine, or tunnel, carries load from the front suspension back to the rear of the car, where the engine cradle castings transmit loads to the rear suspension mount castings.

That makes the tunnel a crucial link. It is a three-sided aluminum square tube, with an open bottom. For the C8 Corvette, Chevrolet applies a carbon fiber panel to the bottom to close that tunnel off, boosting its strength by 10 percent.

Chevy engineers applied carbon fiber judiciously to keep the ‘Vette’s cost down, selecting the fashionable material for the tunnel close-out panel and for the rear bumper beam. With the engine and transmission at the car’s rear end, it was important to minimize the weight of other components at the back, which is why the rear bumper beam is carbon fiber, Moss explained.

“We started with more carbon pieces, but those are the only ones we thought added enough value to be worth the money,” he said.