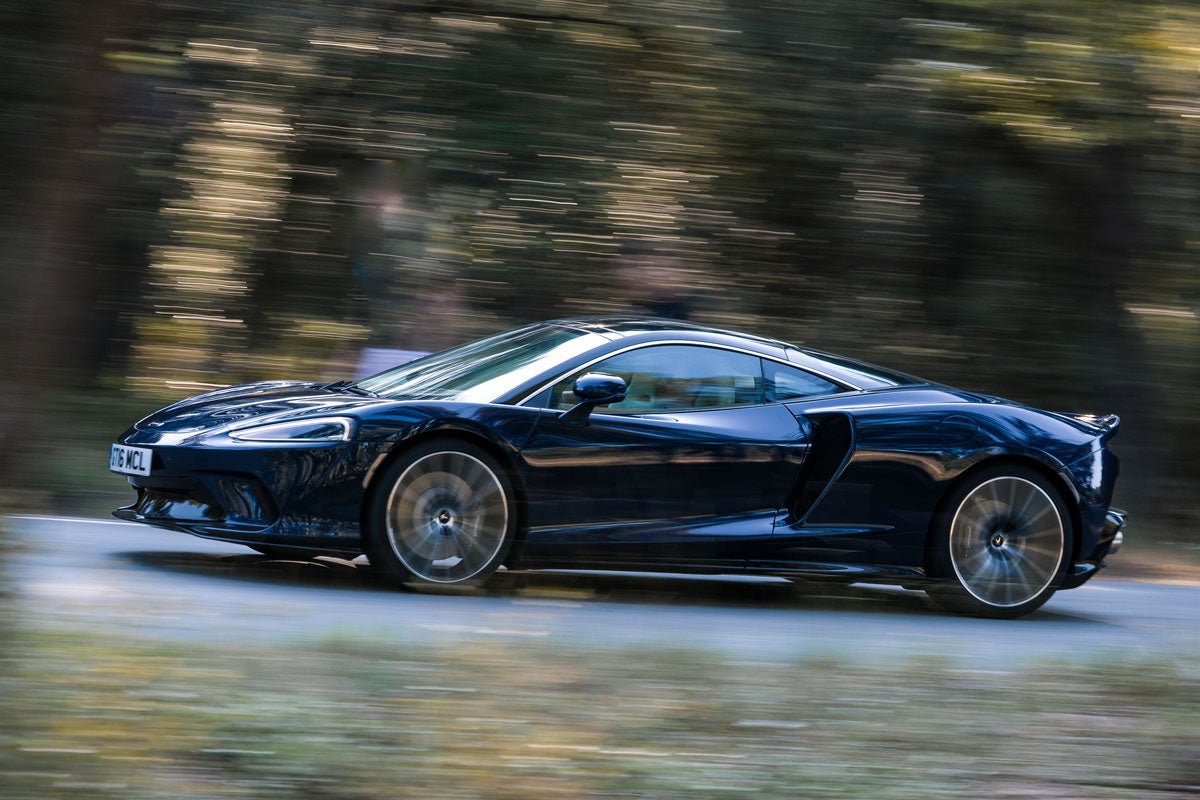 Fantasy meeting reality is often a source of disappointment. Racy, mid-engine supercars have sexy lines and a hair-raising soundtrack on the way to astounding speeds, but lack certain comforts we’ve come to expect. For instance, the available cargo space will cause you to redefine your definition of “packing light” if you hope to take a trip in one.

The 2020 McLaren GT aims to be the supercar you can live with, by applying McLaren’s established carbon fiber chassis, linked hydraulic suspension system and twin-turbocharged V8 engine to a car that prioritizes comfort and practicality over racetrack lap times.

Because its fundamental design demands excellent performance, the GT can afford to give away a few percent of absolute track acumen in exchange for the ability to drive the car with an unexpected degree of comfort.

So while the basic carbon fiber MonoCell II tub carries over, this is the “T” variant, which is one of the changes McLaren made to the GT to create a more livable—but still blindingly fast—supercar.

This diminished performance from the sport-centric 720S results in a top speed of “only” 203 mph. Zero to 60 mph acceleration might as well be measured by sundial, as the 612-horsepower 4.0-liter V8 engine needs 3.1 whole seconds to get there. You still click the steering wheel-mounted paddles to shift the 7-speed dual-clutch transmission along the way.

McLaren’s calibration engineers put in the easy-to-overlook sweat and late nights to ensure proper calibration. That means slick gearchanges that are barely perceptible, and an active muffler system that ensure the GT is seen but not heard until the appropriate time.

This drivetrain achieved 18 mpg on the EPA’s city test and 22 mpg on the highway, so the GT escapes the government’s punishing gas guzzler tax. If you can afford our gorgeous Nakama Blue test car’s $233,500 MSRP, you can probably also afford the gas guzzler tax, but still it is nice to not waste fuel—or money.

The GT rolls on the same 105.3-inch wheelbase as the 720S, but it stretches 4.5 inches longer and its roof arches higher over the engine bay to provide an unexpected 20.1 cubic feet of total storage space. The 14.1-cubic-foot space atop the engine will accept two pairs of skis or a single golf bag, while the front trunk will hold a more normal duffel bag-shaped parcel.

The GT rolls on front springs that are 64 percent as stiff as those in the 720S, which contributes to a cushier ride for the long haul. The rear Z-bar anti-roll device is correspondingly softer to maintain balanced handling.

McLaren’s flip-up “dihedral” doors are sort of a hybrid between Lamborghini-style “scissor” doors that flip forward and, say, the Ford GT, whose gullwing doors are hinged in the center of the roof.

These alternative kinds of doors can make ingress and egress challenging, but McLaren cuts out enough of the roof as part of the door to make it a little easier getting in.

For the GT, they’ve improved the doors by also cutting back into the bottom of the door jamb, so you stand closer to the seats when getting in or climbing out. This contributes to making dramatic doors more tolerable, especially if the driver chooses to wear a dress.

Now, it is backed by a ten-core processor that is five times faster than the old chip, and it displays navigation information from the HERE network. The system’s menu system has been flattened, making it quicker and easier to get to important functions too.

Too many supercars are fitted with torturous, fixed, one-piece carbon fiber racing seats. The GT, in contrast, features adjustable seats that are packed with support for the back and shoulders and wrapped in soft nappa leather to cosset the occupants. The front wheelwells intrude into the GT’s footwells, impeding long-term comfort, but the seats are opulent and will keep occupants happy even when slogging through the kind of resort traffic we encounted approaching our hotel following a drive through the Alps Maritimes.

In those mountains, the GT showed that its driving pedigree had not been compromised in any discernible way, even if a stopwatch or radar gun reveals that the 720S is faster. Preserving the McLaren carbon fiber chassis and mid-engine layout lets the GT retain a center of gravity near the driver’s hips rather than near the car’s dashboard.

The GT’s responsive driving dynamics flow directly from the sound fundamentals, without the manufacturer having to try to shore up fundamental weaknesses with unyielding springs, shock absorbers and sway bars.

Rolling into the Cannes Intercontinental hotel behind the wheel of a gorgeous dream car like the GT will not result in your needing to be extracted from the car with the doorman’s assistance, thanks to the comfort the car provides.