The 186-mph vehicle sports louder styling but a quieter engine. 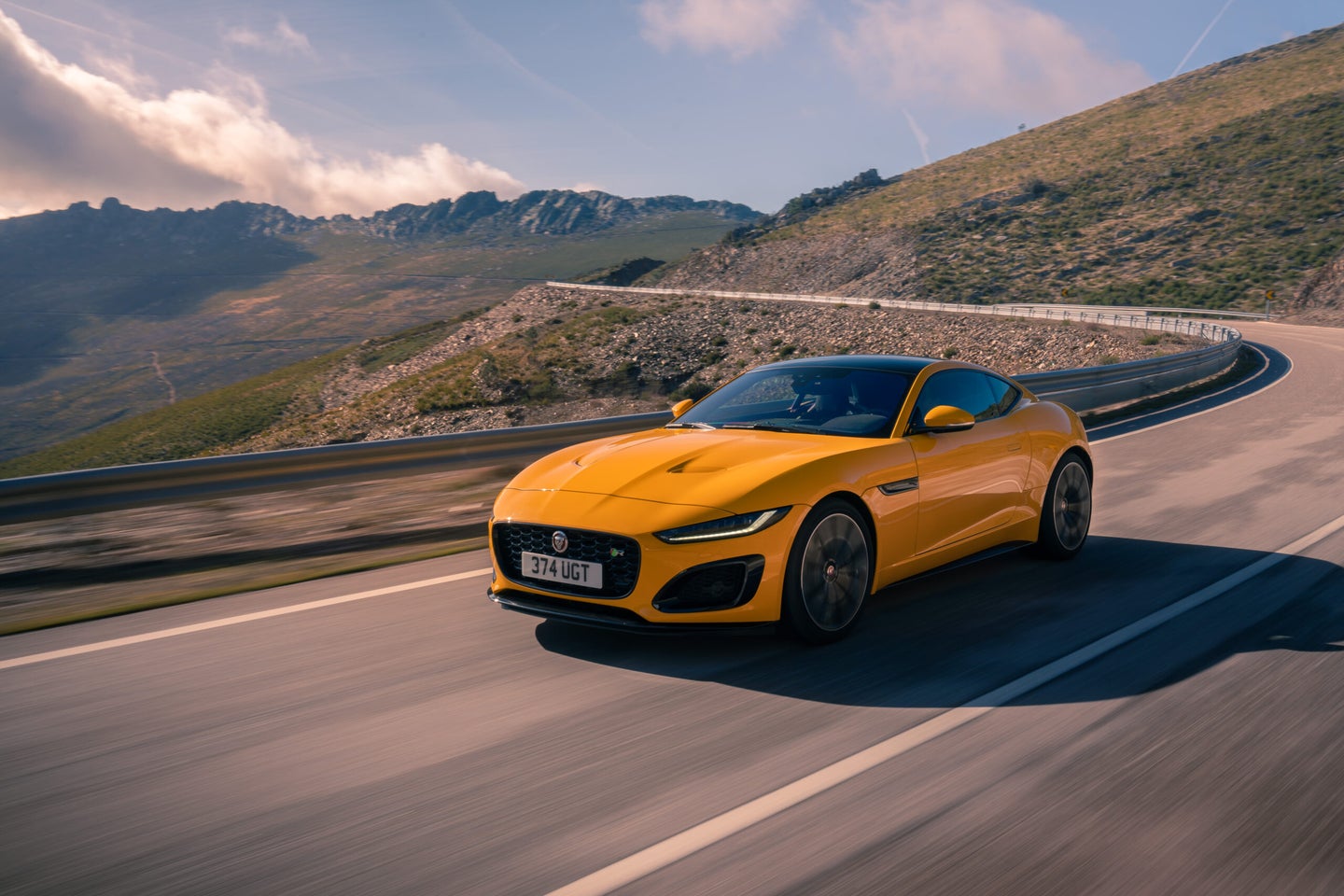 The philosophical distance between the Portuguese cities of workaday Porto and cosmopolitan Lisbon can feel greater than the physical distance. Perhaps that made the route between them—including an eastward diversion to spend time on some of Europe’s finest driving roads—the perfect place for Jaguar to demonstrate changes to the newly refreshed 2021 Jaguar F-Type that are as significant to the car’s evolving philosophy as to its upgraded technical specifications.

Their 2021 update of its $103,200 F-Type two-seat sports car (the convertible version costs $105,900) is a glorious return to form for a company that built its reputation on the 24 Hours of Le Mans-winning performance of its D-Type, and the voluptuous styling of its E-Type.

Carmakers like Jaguar, which enjoy the benefit of an illustrious heritage, risk being captured by that heritage and doomed to being thought of as “classics” even though they are new. When Jag returned to the market for proper two-seat sports cars with the F-Type in 2013, it understandably took a conservative approach that reminded prospective buyers of the brand’s history. But now that it has reestablished itself as a player in the sports car market, Jaguar designers were unshackled from heritage and freed to deliver a fresh, contemporary update.

His design team’s creativity is apparent in the new F-Type, and the ability of the styling to speak loud and clear perhaps encouraged the engineering team to dial back the engine’s voice a little bit. For 2021, the F-Type offers a “quiet start” mode that keeps the muffler bypass valves closed on startup to hush the bark of the 575-horsepower, 516-pound-foot 5.0-liter supercharged V8, saving drivers from their neighbor’s stink eye during early morning starts.

In regular driving, Jaguar has long touted the “theater” of the F-Type’s exhaust crackle on overrun. However, this carefully cultivated exuberance is excessive no more: Jag doesn’t say they’ve toned it down, but the F-Type’s V8 does wear close-coupled particulate filters on its exhaust manifolds, so maybe the pollution scrubbers also serve to put a sock in it.

However it happened, the over-the-top vocalizing of the previous model has been replaced by something that is dialed back just enough to seem more authentic in the ebb and flow of throttle application while slicing through Portugal’s Gardunha Mountains. Small changes to the V8 bump its output by 25 hp and 14 pound-foot from last year, contributing to a 0 to 60 mph acceleration of 3.5 seconds (which we experienced during the test drive) and an electronically limited top speed of 186 mph (which we did not).

Even more frugal buyers, or those seeking something a little more elemental, can choose the rear-drive P300, which is powered by a 296-hp, 295-pound-foot turbocharged 2.0-liter inline four-cylinder engine that delivers a suitably feline growl that sounds perfectly appropriate in a premium brand like a Jaguar. At 3,351 pounds, the four-cylinder, rear-drive P300 weighs 500 pounds less than the V8, all-wheel drive R model, which contributes to the car’s ability to squirt to 60 mph in just 5.4 seconds. Its top speed is electronically limited to 155 mph. Which seems like enough.

Traditionalists will be dismayed to learn that even the most stripped-down model of the 2021 F-Type is fitted with an 8-speed planetary automatic transmission. This gearbox enjoys clever programming to ooze between gears when driving in comfort mode and cracking off crisp shifts at just the right time in sport mode.

It responds instantly to squeezes on the steering wheel-mounted shift paddles, in contrast to the lag that plagued the previous-generation C7 Chevrolet Corvette, which employed a similar automatic transmission. But there’s no old-school H-pattern shifter and clutch pedal for those of us who’d rather do it ourselves. We have to believe the F-Type P300 convertible would be a really special car with a manual transmission.

The real technical improvements for 2021 are in the F-Type’s suspension. The original car was good, but could feel vague when steering into turns and twitchy when accelerating out of them with the V8’s ferocious power.

Jag grabbed engineer Tanmay Dube from McLaren Automotive, where he recently oversaw development of that company’s spectacular 720S, and he applied his know-how to massage the F-Type’s suspension. Naturally, Dube fiddled with the spring rates, anti-roll bar stiffness and shock absorber damping rates to move the car in the direction he wanted.

But before that, he addressed some inherent shortcomings to the rear suspension. A new die cast aluminum rear hub carrier, enlarged wheel bearings and revised upper ball joints increased camber (how vertical the wheel is) stiffness by 37 percent and the toe (how much the wheels point inward toward each other) stiffness by 41 percent, which eliminates any squirrely movement the old suspension might have experienced under hard cornering loads.

That increased rigidity improved the accuracy of the car’s steering feel from the contact patches of the tires. And those are larger too, because the front and rear Pirelli P Zero tires are 10 mm wider than the ones on last year’s model. “The old V8 had a tendency to be a bit more scary,” says Dube during our trip. “This is more progressive.”

Despite all those hardware changes, for Dube’s money, the biggest upgrade came in the car’s software. “The real standout feature is the recalibrated power steering,” he says. “It has sharper on-center feel and more effort on turn in. It took us months and months tuning the steering with [test driver] Mike Cross.”

That meant engineers riding along in the passenger seat, data flowing from their laptop to make changes in response to Cross’s feedback as the car circulated Jaguar’s test track. (No word on the bill for engineers’ airsickness bags during this part of the job.)

The F-Type backs up those claims, perfectly dissecting Portugal’s mountain switchbacks then absorbing the highway miles with aplomb once we’re crossing the plain toward Lisbon. After the sun sets, we get to enjoy the F-Type’s advanced LED matrix headlights, as they automatically cast shadows on other vehicles, while still brilliantly lighting the road ahead. It’s an impressive, if slightly distracting, technology, as I watch the lights continuously adjust. Alas, these lights aren’t legal in the U.S.

The day behind the wheel in the 2021 F-Type underscores both the success of the car’s maturation into a more refined and contemporary sports car as well as the effectiveness of the hard work that went into making the car worth the hundred grand it costs to call one yours. All our journeys of philosophical self-discovery should be so successful!