The run went down on a German test track. 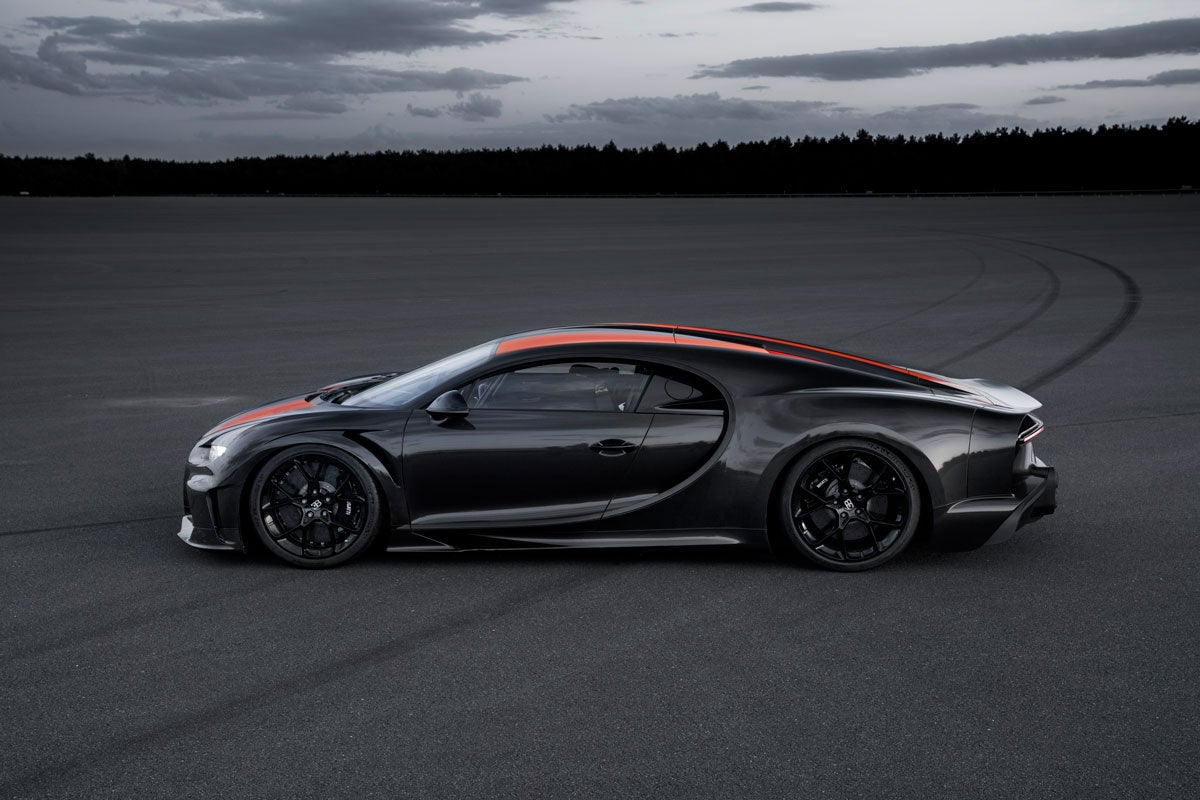 Bugatti’s 1,500-horsepower Chiron hypercar has reclaimed the world speed record for production cars with a run of 304.773 mph, making the French luxury marque the first to top 300 mph in a production model.

The Chiron seemed destined to be the world’s first production car to top 300 mph when it was introduced as the replacement for the Veyron. After all, that car held the record of 267.8 mph, and the Chiron is more powerful.

Especially after Swedish rival Koenigsegg wrested the record away in 2017 with a run of 284 mph in that company’s Agera RS.

The record-setting car drew its power from an 8.0-liter, W16 engine, but a run like this requires more than pure power.

At speeds faster than 150 mph, cars become aircraft first and ground vehicles second, as aerodynamic forces become stronger than gravity and friction, so Bugatti was understandably wary of pursuing records. This modified version of the Chiron sits lower and has a 10-inch longer body than the production version.

Indeed, now that it has been the first brand to exceed 300 mph, Bugatti has pre-emptively withdrawn from any further top speed competitions. “In future we will focus on other areas” explained Stephan Winkelmann, President of Bugatti.

This is because the technical obstacles to safely going that fast in a ground vehicle are formidable, and no car maker wants to be associated with the negative results of careless attempts at record speeds. Bugatti maximized the safety of this attempt in every respect.

The driver was Andy Wallace. If that name rings a bell, it might be because he previously set the 243 mph top speed record in a McLaren F1.

The Chiron was reinforced with a safety cage to protect Wallace and of course, he used a full six-point racing harness, fire suit and helmet for the record attempt. Bugatti selected the test track at Ehra-Lessien in Lower Saxony, Germany for the record run. This was also the same venue where Wallace piloted the McLaren F1 to its earlier record.

The circuit lies nearly at sea level, which is good for engine power, but the same dense air that contributes to horsepower becomes a virtual impenetrable wall at such ludicrous speed. Nevertheless, Bugatti likes the track because it is lined with guard rails for its entire 13-mile length and has safety crews positioned at both ends of the course.

“A world record attempt at such an extreme speed of over 400 kph (250 mph) always involves a certain risk,” remarked Bugatti head of development Stefan Ellrott. “Everything has to be right – the car, the weather and the track. Ehra-Lessien offers the greatest possible safety, which is why we opted for this track.”

Indeed, the team, whose effort was backed by Italian IndyCar constructor Dallara, which has experience operating cars at very high speeds, employed the equivalent of the world’s largest lint roller to clean the track surface of any stones or grit prior to the run.

If there was any one primary obstacle to driving 300 mph, it was the tires. At such speeds, they spin at 4,100 rpm, generating forces of 5300 g. Michelin supplied reinforced Pilot Sport Cup 2 high-performance tires for the effort, testing them at 318 mph on a test bench to ensure they can take the extreme forces at such speeds. The tires used on the car were individually x-rayed to ensure flawless construction.

Such extensive preparation may seem like overkill, but Wallace is well aware of the hazards presented by these speeds.

“I think most people have been 150 mph at some time during their life,” said Wallace, perhaps optimistically. “If you then add just 30 to make it 180 mph, that’s a whole different world. Then when you get to 200, it’s a lot faster than 180. But when you’re talking about 300, it’s a massive, massive step.”

To reach terminal velocity on the track’s 5.5-mile straight, Wallace had to exit the preceding curve at 124 mph before holding the gas pedal to the floor for 70 continuous seconds to reach the target speed. That left him a little more than a mile to slow back to 124 mph for the onrushing curve.

“A world record attempt on an open track can have a few surprises in store,” noted Ellrott. “We were lucky today and everything went well.” Unlike so many gamblers, Bugatti has decided to get up from the table with all its winnings and turn its attention to different challenges for future models. Now, no rival can ever be the first to reach 300 mph, no matter how fast they might go.