Meet the Iguana, an amphibious craft with deployable caterpillar treads. 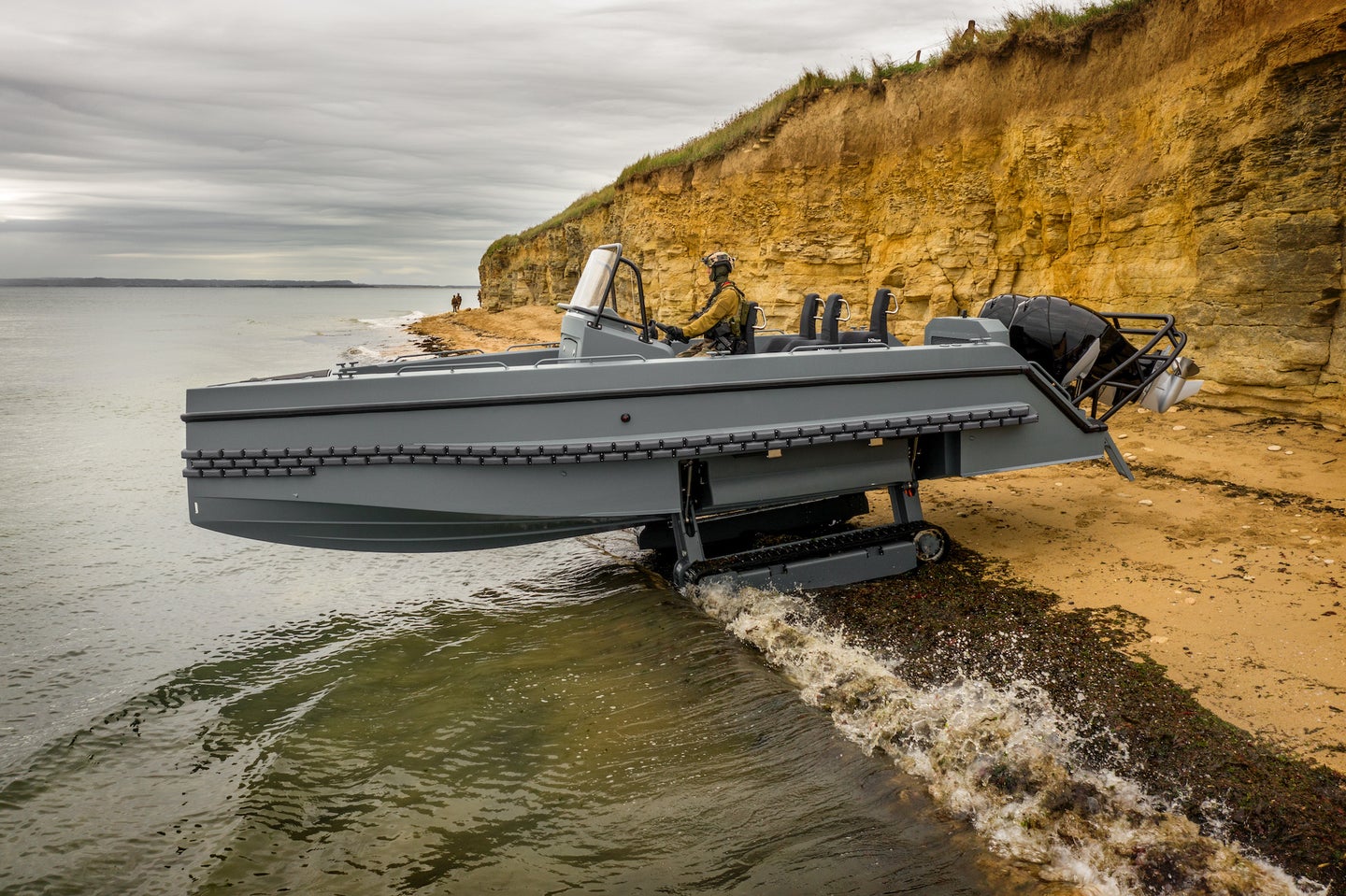 Those caterpillar treads fold back up into the boat for speedy travel when it's in the water. Iguana Yachts
SHARE

A French amphibious boat that employs caterpillar treads instead of wheels has seduced the U.S. Navy. In late 2020 it bought two of them, called Iguana Interceptors, for shallow-water surveillance missions.

Amphibious boats are certainly not a new concept. In the 20th century, notably during World War II, the United States, Great Britain and Germany all developed versions, but they were land vehicles that could be used on water. In the 21st century a very small number of companies, including New Zealand company Sealegs, have turned that idea on its head; they have been developing fast boats that can be used on land. But, like their 20th-century ancestors, they all have wheels, generally one in the front and two in the rear.

The Iguana is the only fast boat in the world with caterpillar tracks. It was designed by a company, Iguana Yachts, founded in 2008 by Antoine Brugidou in Normandy, on France’s Atlantic coast. The coastline there sees some of the world’s biggest tidal ranges, and that was a problem for Brugidou, a boating enthusiast. If he wanted to take his pleasure boat out at low tide and come back at high tide, he couldn’t haul his boat down to the shoreline and then leave the vehicle and trailer on the beach—they’d be underwater by the time he came home.

The answer was to give the boat retractable caterpillar treads so it can rumble down the beach and into the water without needing to be towed. This solution not only does away with the need to have a dock, as the boat can be kept on dry land, but it also keeps the hull sleek. It’s like an iguana, a reptile that stays streamlined in the water by tucking its front legs under its belly when it swims.

Julien Poirier, the company’s chief operating officer, says that the initial prototype came out of the Iguana shipyard in 2011, and the first boat was sold two years later. The caterpillar track system, or “mobility system” as the company calls it, “has proved its robustness and efficiency” since then, as the company website says.

When aluminum arms lower the kevlar and rubber caterpillar tracks to the ground, the 30-foot-long, 10.5-foot-wide, 4.4-ton vessel lifts about three feet off the ground. A retractable ladder at the back allows access on and off the boat. The craft may appear to be unstable, but Poirier said 11 people, each weighing some 176 pounds, can stand in it while it was on its caterpillar tracks and it remains “extremely stable.” Once the boat has trundled down into a minimum of 1.8 feet of water, the tracks fold flush back into the hull without compromising its hydrodynamic properties—you’d never guess there was anything unusual about it.

The company’s website stresses the solution was “developed specifically to be both efficient and extremely resistant.”

It quickly became apparent that the boat had obvious defense, homeland security, coast guard, and life-saving applications. The company developed a militarized version, the IG Pro 31 Interceptor, both as a rigid hull and a RIB (rigid inflatable boat) with an all-around inflatable tube making it “safe and more comfortable” according to the vessel brochure.

The Interceptor’s tracks deploy and retract in just 8 seconds and can be used to travel at a top speed of about 4.5 mph along shores that are muddy, sandy, or rocky and even up inclines with a 40-percent grade. In the water, the boat is powered by two 450 horsepower engines, taking it to a top speed of 52 knots (60 mph). It can be used in winds up to Beaufort 8: that’s a gale with winds of up to 46 mph and waves up to 25 feet high. It can carry up to 2,645 pounds, so that’s 11 people plus 709 pounds of gear. But there are only five seats on the rigid Interceptor (six on the RIB) so that leaves plenty of wiggle room to carry all sorts of other equipment, including a light machine-gun mounted on the front.

Iguana specifies that the whole boat can be customized based on the existing carbon fiber and glass-reinforced plastic (or GRP) hull and mobility system. For example, it could be equipped with shock-mitigating seats, a hard top, a crash engine rail, lights, cameras, and so on. And to mitigate the boat’s carbon footprint it can also be equipped with electrically powered engines.

To date two Interceptors have been bought by the U.S. Navy for shallow-water surveillance missions. Poirier says advanced discussions are ongoing with defense ministries in a number of other countries. As for the French armed forces, they are only just beginning to realize that an interesting product has been developed at home.