Battery-powered planes are coming. The flights just have to be short. 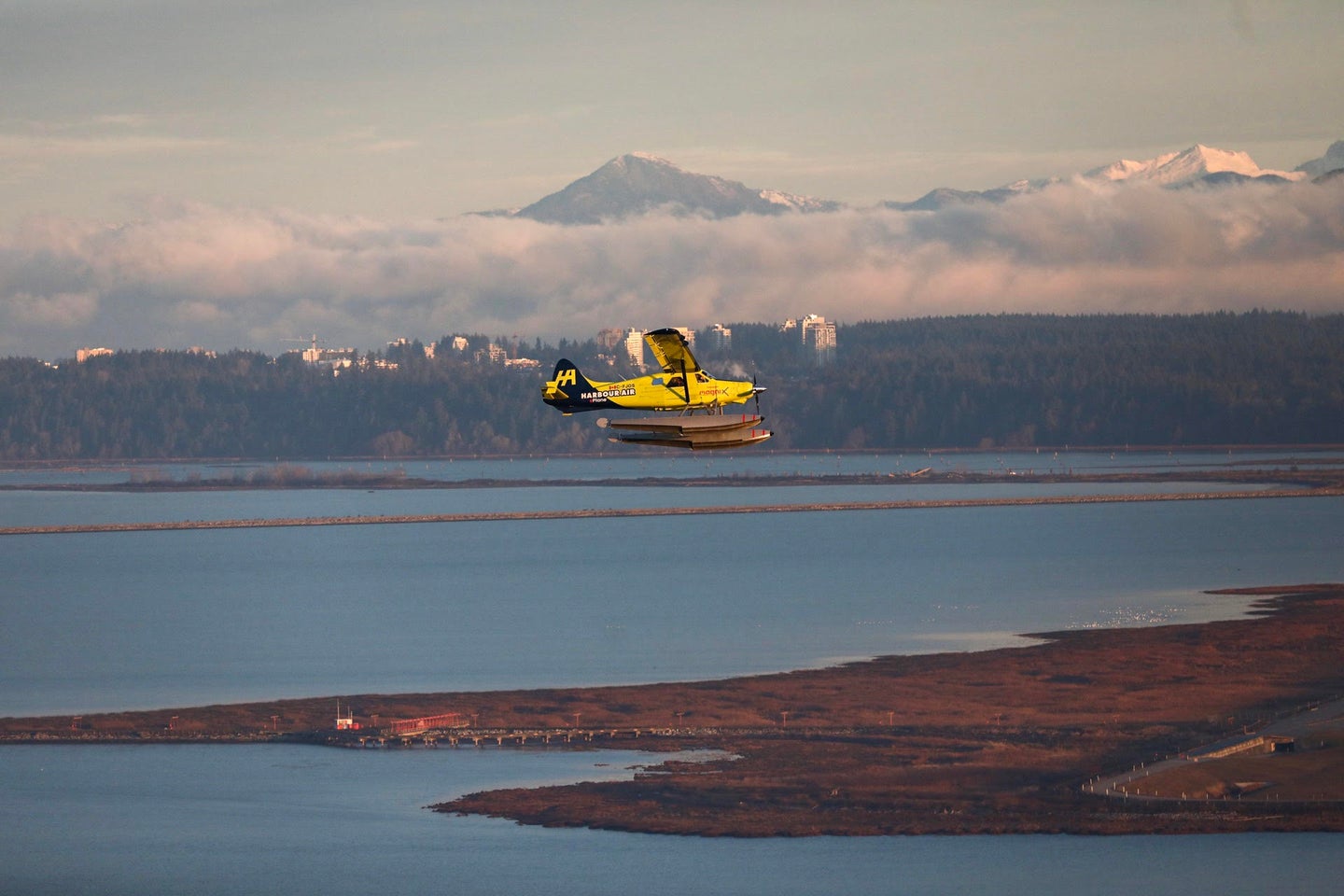 A flight in a small seaplane from Vancouver to Victoria, British Columbia, takes about 30 minutes. The brief trip is mostly over water, and the planes generally stay between 1,000 and 2,500 above the surface. That’s the main route operated by Harbour Air, an airline flying float planes in British Columbia. And someday, if all goes well, passengers on that route will find themselves in a seaplane not pulled through the air by a loud, dirty, fuel-guzzling engine, but instead, by an electric motor powering the single propeller.

Usually, when you hear about electric aviation, the flying machine in the news looks totally different from a traditional airplane. They typically resemble a futuristic helicopter. For example, in January, Boeing flew a prototype of a craft powered by eight electric propellers that allow it to take off and land vertically. Electric or hybrid-electric aircraft like these are called VTOLs, which stands for “vertical take-off and landing.” Uber, for example, imagines fleets of these flying taxis taking people where they need to go for short flights.

But Harbour Air has done something different. They ripped out the regular engine on a DHC-2 de Havilland Beaver and instead, put an electric one made by a company called magniX in its place. And earlier this week, that little plane took to the skies for a roughly 10-minute-long, all-electric flight in British Columbia. At the controls was Greg McDougall, the CEO of the airline.

Take out the fuel tank

McDougall started Harbour Air in 1982. He had “a couple of airplanes, and big ideas,” he recalls. Its business at the time focused on “flying into logging camps,” and the like. Tourism arrived in the mid-80s—they began lifting people into distant fishing lodges—and now, it’s more of a regional airline that gets people where they need to go for everyday reasons. After all, taking a seaplane is faster than a ferry. “It’s become a part of the way of life of people in British Columbia,” he says.

The company is starting by converting just this one plane to electric propulsion, but if all goes well, it will do more. “We’re intending to be the first commercial operation of electric aircraft in the world,” McDougall says.

In their test plane, batteries occupy the belly of the plane where fuel typically goes. Of course, batteries can’t propel a plane nearly as far as traditional fuel can, so their goal is to do a 30-minute flight with 30 minutes of reserve, as required by regulations.

“We’re not building a whole new aircraft around the technology,” he says. “We’re taking tried and true airframes, and all we’re doing is changing the propulsion system.”

Of course, flying an electric plane comes with significant tradeoffs—for better and worse. In addition to the range limits, recharge time between flights will be longer, compared to fuel that began its life as oil in the ground. But the benefits are less noise, lots of torque, and of course, no polluting emissions from the plane.

Roei Ganzarski, the CEO of magniX, the company making the electric motor that will go in the Harbour Air puddle-jumper, mentions other benefits. The motor can connect directly to the propeller. That way, they can “eliminate the heavy, complicated, maintenance-prone gear box,” he says, which you need to use with a traditional internal-combustion engine. The change “really simplifies the front-end of the aircraft.”

Another boon: he argues that the motor will be more reliable than the traditional kind. The electric motor has “four smaller internally-controlled independent motors inside of it,” Ganzarski says. That means that if part of the engine has a problem, the pilot can shut it off partially but keep spinning the prop at, say, 75 percent power. That kind of fallback capability exists for planes with multiple engines, but not for craft with just one.

But when you’re flying in a battery-powered plane, the inevitable question is: What happens if you run out of juice?

“One of the things that we’re going to have to prove during the regulatory process is that we are as safe, or safer, than what we currently have,” McDougall adds. “It’s going to be heavily scrutinized—there’s no question about that—because it’s new.”

Harbour Air hopes that after this first experimental flight with the electric Beaver aircraft, they could carry passengers in 2022 and even convert more of their fleet to electric propulsion.

“While there’s a lot of challenges for totally electric planes, it turns out this is an interesting example,” says R. John Hansman, a professor of aeronautics at MIT. Because of the poor energy density of batteries, “it’s very hard to have long-range missions with them.” But Harbour Air’s missions are short.

Hansman says that relying on batteries in an aircraft can bring their own challenges. Temperature, and the history of the battery, can affect their performance. And measuring liquid fuel to see if you have enough reserve for a given flying time is simple compared to making sure your batteries have enough charge to get you where you need to go.

“It’s actually very easy to calculate how much fuel you need for an extra 30 minutes,” he says. “It turns out, it’s not so easy to determine whether the battery has sufficient extra charge for an additional 30 minutes.”

Another issue is making sure the battery pack system can handle a “thermal runaway,” he says—you don’t want a cell to overheat and spread to others. “The way it’s normally managed is by isolating the battery cells, which adds weight, so that’s one of the challenges.”

This article was originally published in April. It has been updated with the news of the company’s first successful electric flight.