Wearers can get in and out of the shoes with no hands. 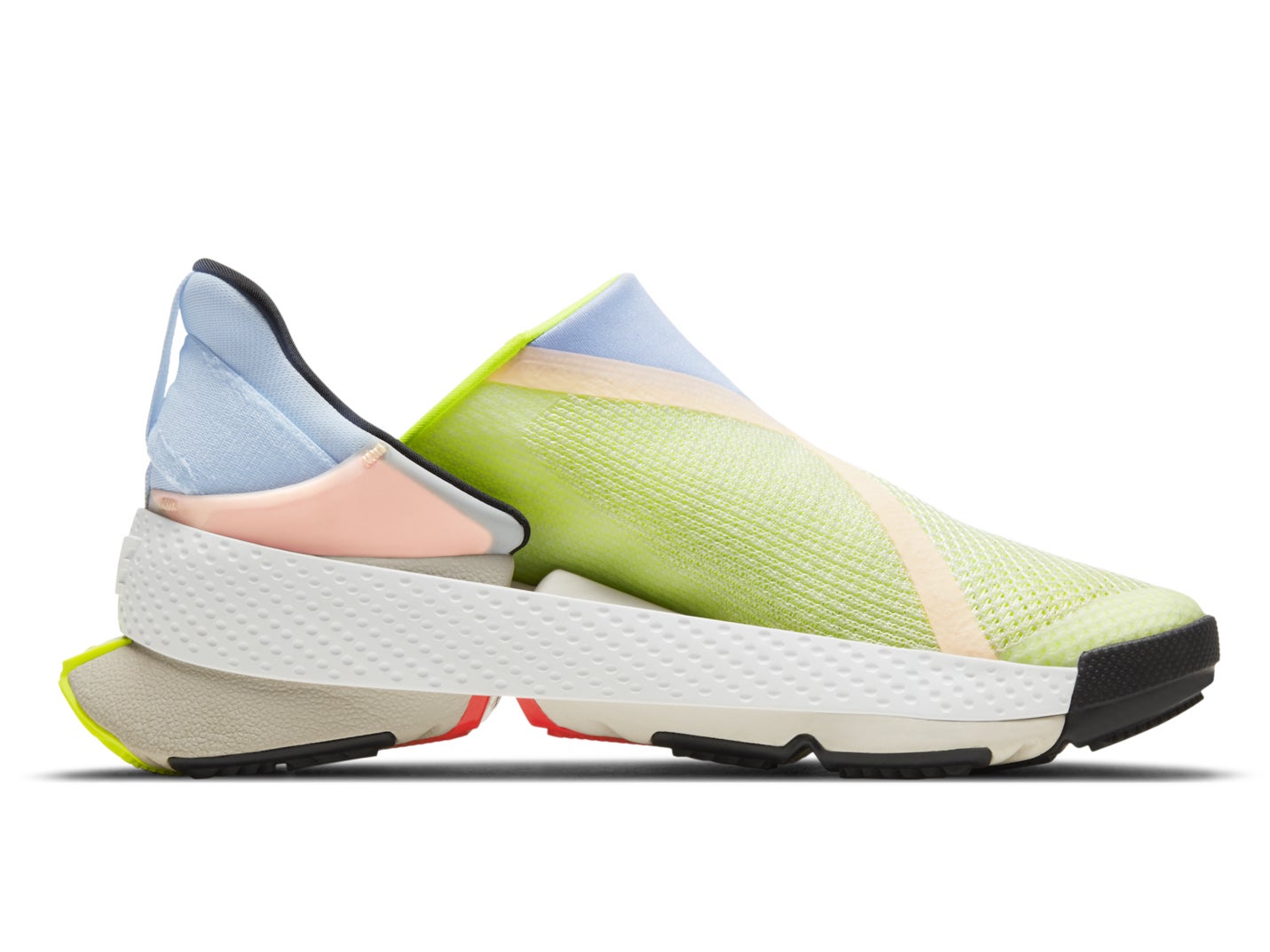 The GO FlyEase is a new step in, step out shoe that ditches all lacing, adjusting, and technical altering. Nike
SHARE

Humans have been tying shoelaces for millennia. The Areni-1 shoe, often-cited as the world’s oldest leather shoe, was found in an Armenian cave in 2010 and radiocarbon dated back to 3500 B.C.E., and even that old loafer was laced front and back with what scientists surmise was a leather cord. And while many shoe designers have tried in the past to create a shoe with velcro, zippers, and other securing measures, the lace has endured. Nike may have just taken a step toward challenging the lace’s dominance.

Laces have stuck around this long in large part because no one has invented anything better. The lace provides something that the snap, velcro (to a certain extent), and zipper can’t compete with: A personal touch. An expertly laced shoe that’s tight and loose in all the right places is a work of art. One study even found that a well-laced shoe, compared to an elastic fastener, can prevent running injuries in some people.

Nike has been working on this for years with its Adapt technology that employs a lacing system that electronically adjusts to the shape of the wearer’s foot and its FlyEase technology originally developed for athletes with conditions that make it more challenging to lace their shoes. But both of those features require some manual adjustment to get them on. Today, Nike announced a brand new shoe that uses a novel shoe technology that attempts to eliminate that added step: The GO FlyEase, a step in, step out shoe that ditches all lacing, adjusting, and technical altering.

The technology for the shoe rests in a so-called bistable hinge, a patent-pending design that is built into the shoe’s outsole. The hinge alternates between an “on” and “off” position. Without your foot inside, the shoe rests in the off position, which looks like the outsole has been inverted or even broken. Pop your foot into the shoes and it quickly locks into the on position. To keep the shoe in both positions, a tensioner wraps around the outside of the shoe, which does the tightening and securing that would normally go to the laces.

Contrary to what it might look like, the bi-stable hinge doesn’t split the shoe in half, but rather bifurcates the outsole, according to Sarah Reinertsen, Nike’s lead designer of the GO FlyEase.

In designing the shoe, Reinertsen says the design team used their years of research that went into developing the original FlyEase, which used zippers and other ties to make for an easier and still secure lace-up. But in designing the new GO FlyEase, the team knew they wanted to eliminate any need to use your hands at all. “If we could create something that if someone with no hands could get their shoes on, then we could unlock those benefits for all.”

The process of removing the shoe is perhaps their biggest appeal to shoe-wearers everywhere. Nike drew inspiration from the common method of using your toe to hold the opposite shoe as you pull your heel out of it.

I haven’t tried the shoe out yet, so it’s hard to say how easy this process will be and how secure my foot will feel inside. It has a hard fight against the humble shoe lace, which hasn’t failed us yet. But at $120 per pair, the shoe isn’t so expensive that I wouldn’t hesitate to give it a shot. Nike says the new kicks are geared towards everyday wear, from going to the grocery store or on a casual walk with friends. When I pressed them on whether this technology will be used for other shoes designed specifically for activities like running or basketball, Nike said there weren’t any current plans but didn’t outwardly dismiss the question. It wouldn’t be unlike the shoewear company to promote a new technology for everyday wear and then incorporate it into their other shoe lines. An example of this is the React foam which Nike premiered in its Epic React shoe in 2018 for everyday athletes and is now used in other running shoes like the 2020 Nike Air Zoom Tempo Next%.

The GO FlyEase shoe will be available to select Nike members starting on February 15 and available more broadly in the coming months.