Bots like these could fight in the next wars or help rescue people in challenging and dangerous underground environments. 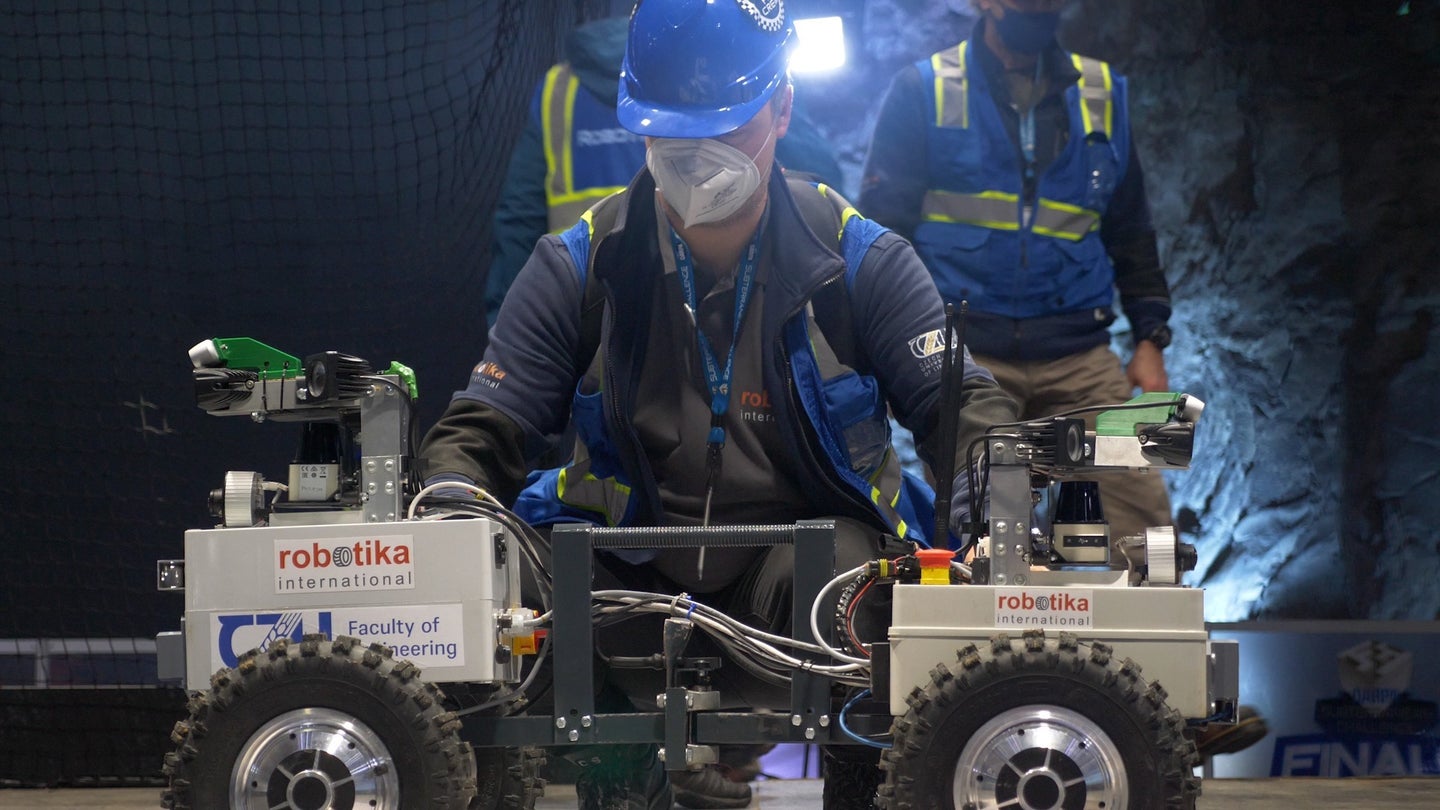 Underneath Louisville, Kentucky, about halfway through its prize-winning run, a robot called ANYmal C hit a false wall. It backed up, walked forward, and then hit the wall again, continuing for a few minutes. Each time the suspended wall yielded a little, then swung back into place. The wall, installed by DARPA for the final piece of a multipart competition called the Subterranean Challenge, was just one part of a massive and deliberately constructed underground obstacle course, the culmination of years of work. By the end of the competition, team Cerberus, whose robot kept colliding with the wall, would win the $2,000,000 grand prize.

The finals of the Subterranean Challenge took place over September 21 – 24. The course, built into the Louisville Megacavern, contained sections that mimicked tunnel, cave, and urban environments, all areas where rescue or military robots might someday operate. Two of those environments, Tunnel and Urban, had been subject to their own prior challenges, where teams honed skills and refined robot design. The Cave Circuit, scheduled for late 2020, was called off due to the pandemic.

Each of the physical challenges, with teams sending robots into actual underground environments in physical space, also had a virtual component. The virtual component was a parallel track, in which teams coded guidance algorithms that, when programmed into a selection of robot avatars, would successfully pilot robots through wholly unfamiliar settings.

Navigating underground spaces is a hard problem. Most of the existing technology for robots, from communications to locomotion, are built for open air and open skies, where radio signals travel freely. Caves make signals difficult, and flight tricky; even walking can be hard.

Yet the world is full of underground places, and those are some of the spaces the military expects to operate in the next decades. Exploring a never-before-mapped tunnel is not a fun task, but for humans looking to move through a fiercely-contested city, being able to follow a path set by a robot guide is much better than going it alone.

This is also a vital task for rescue work. Navigating through rubble or collapsed mines is best left to machines that don’t need to breathe, and is even better if those machines can also lead human rescuers to where they need to go.

To simulate this rescue work, among the tasks for the robots was finding thermal mannequins. These inert dummies, dressed like workers with boots, hard hats, and safety vests, also emitted heat and sound, making them detectable by infrared cameras and microphones.

In addition to mannequins (termed “survivors” in the official competition rules), robots were on the lookout for backpacks, fire extinguishers, drills, vents, gas, ropes, helmets, and special cubes.

Each team had an hour to run the course, with scoring based on how accurately the robot identified such an artifact. In the event that two teams identified the same number of artifacts on a given run, the earliest identification of the last found object would be used as a tie-breaker, which is how team Cerberus beat CSIRO Data61, with exactly a minute lead.

Team MARBLE (for “Multi-agent Autonomy with Radar-Based Localization for Exploration”) came in third, out of eight teams that sent robots into the finals course.

In the process of navigating the competition course, the robots built useful clear maps with surprising degree of accuracy.

Ten minutes after the false wall, one of Cerberus’ robots struggled with the tunnel section. Unlike the cave, which is all rough and irregular terrain, this tunnel had a long section of smooth, undifferentiated wall. That lack of distinguishing feature is its own kind of obstacle, and the four-legged robot stood, as if confused, until it found an opening into another passage.

Robots that can navigate the complexity of such spaces, and do so effortlessly, will be a tremendous boon for any force following them into battle. The DARPA Challenge did not invent the concept of underground autonomous navigation, but it did give it form, showing how machines could work together to explore a never-before-seen environment.

What happens next is largely up to the companies and the military labs, to see if there is any research from the challenge that makes sense to further iterate into a new and useful battlefield tool. Whatever option is taken, it will undeniably be better than the Army’s 1960s approach to underground warfare, which called for collapsing the tunnel entrance and treating it as a danger to avoid.

Now, humans can explore the unknown underground that much easier, and leave not just with survivors, but with a map of the caverns.