The Pentagon's mad scientists want to bring brain scans to the smartphone, swarming satellites to space, and self-healing software everywhere. 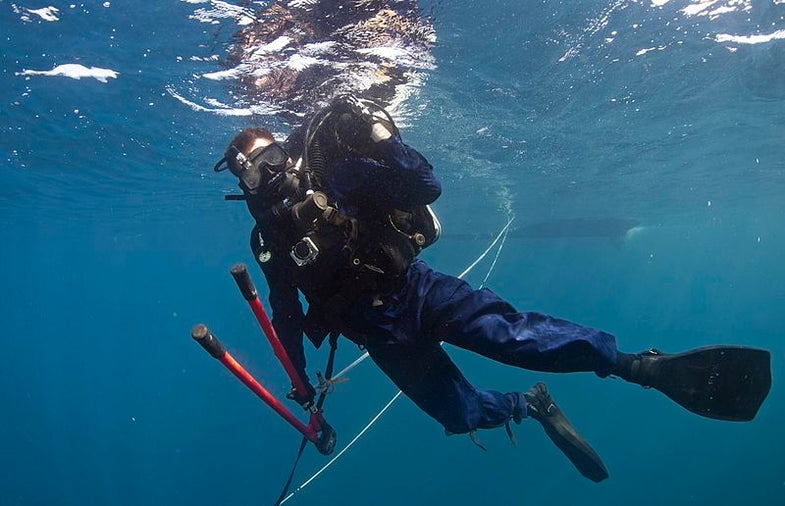 DARPA solicitation days are like Christmas morning for technology nerds, occasions whose bounty defense tech geeks look forward to precisely because we have no idea what we are going to get. And in case you thought DARPA might scale back its far-out R&D ambitions in light of impending defense budget cuts, be advised: the DoD’s blue-sky researchers fear no fiscal cliff (in fact, it has likely already developed a self-assembling hypersonic vehicle that will automatically scramjet the agency to safety should any cliff, fiscal or otherwise, be autonomously detected). So what does DARPA want in 2013? Read on.

Portable Brain Recording Device (With App!): “The effort will develop a portable, inexpensive, and easy-to-use electroencephalography (EEG) device and corresponding mobile application (app) for use by nontraditional audiences,” the solicitations says. Who is this audience? Why, it’s me and you.

According to DARPA, there are plenty of DoD-based reasons for wanting a cheap ($30) and easy to use EEG device that runs off a smartphone–like being able to diagnose neural trauma in the field–but that’s not DARPA’s primary driver for funding this. Rather, given EEGs great potential, it’s just something we need. Having EEGs in every classroom would be a boon to STEM education, the solicitation says, and current commercial EEG setups are too expensive, plagued by problems, and difficult to use. DARPA wants a better phone-based brain reader.

A Way To Beat The Bends: Deep-sea diving is dangerous. Ascend or descend too quickly or without taking the proper precautions, and you could end up with the “bends” or various other conditions caused by inhaling gasses at high pressure or by the differences in pressure at different depths. Divers generally get around this by breathing static gas mixtures at prescribed intervals and durations throughout ascent and descent, as dictated by textbook standards developed over decades and decades of diving.

But every body’s physiology is different–so shouldn’t this process be tailored to the person? DARPA wants a dynamic diving system that simultaneously monitors a diver’s physiology and delivers the necessary gas mixtures at the necessary pressures automatically, making descent and ascent both safer and likely faster (see the military application here?). The agency wants an entire system–both the chip-scaled instruments for measuring the body’s indicators and a system for delivering things like nitric oxide into the air supply at optimal times to keep the diver’s body firing on all cylinders during deep diving operations. In other words, a dive suit and air supply that is also a robotic dive coach and deep-sea doctor.

Self-Healing Software: Everything is networked now–our control systems (everything from our home security systems to building fire-suppression schemes to nuclear power plants), our communications infrastructure, our vehicles, our weaponized drones–and it’s tough to keep tabs on every system all the time. That means the convenience of a networked world also introduces a very vulnerable one as well. In other words, people keep hacking us and DARPA is getting annoyed.

To keep our embedded networked systems from being compromised, “DARPA seeks to develop novel technology for automatically detecting and automatically patching vulnerabilities in networked, embedded systems.” The DoD leaves the door wide open here, without specifying exactly how this technology should look or work, only that it should be widely applicable and versatile. And, presumably, un-hackable.

Electro-Gravity Vision: Most of America’s enemies use electricity and all of them use gravity, making those two attractive means by which to try to detect them when they’re trying to stay concealed. But the signatures that arise from electrical power systems (like portable generators or power distribution systems) and gravity (or, in this case, a lack of mass in the form of a tunnel or underground bunker) decay rapidly over distance. DARPA wants something that can see these signatures from afar.

That means no systems that require sensor placement near the target or payloads aboard low-flying aircraft. DARPA wants true remote sensing tech, something that can operate aboard an aerial system but scan across more than 6 miles of empty space to zero in on the weak signatures of an electrical system or a gravitational aberration. And possibly guide a Hellfire missile.

Swarming Satellites: Picosatellites–satellites weighing less than one kilogram (2.2 pounds)–are inexpensive to launch but also largely ineffective as stand-alone platforms. They’re simply too small to carry any kind of large-scale sensor or power source. DARPA is already at work on what it calls its System F6 satellite cluster–a swarm of picosats that distribute the various computing, communications, navigation, and sensing chores between several satellites working as a unit. It’s launching an F6 testbed to orbit in 2015.

What DARPA now wants is other picosats that can work with its backbone picosat cluster. Specifically, DARPA wants an Earth imaging picosat that can successfully communicate and integrate with the F6 cluster to command, package, and deliver Earth imagery from orbit to the ground via high-speed data link.

Also on DARPA’s 2013 wish list: Biodegradable electronics for medical implant purposes, technologies that can boost wireless communications spectrum capabilities, and “single crystal self-assembly.” If any of this sounds like a technology you can deliver, Uncle Sam wants you.