These bots are made for walking 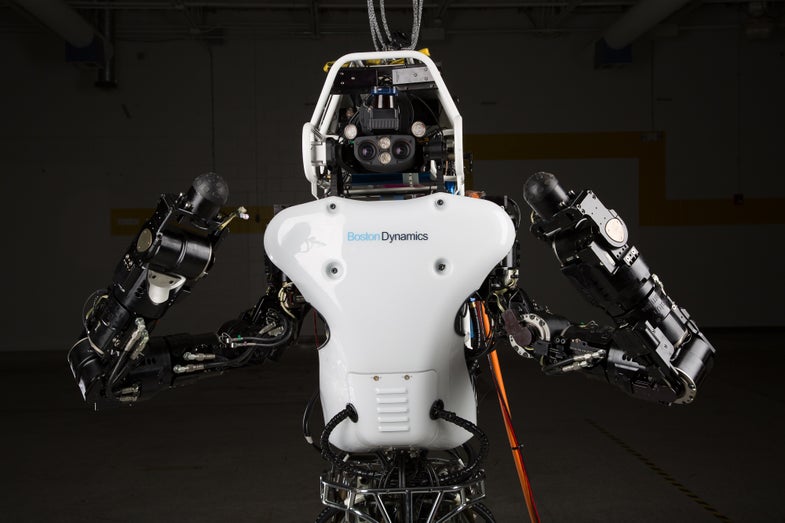 The DARPA Robotics Challenge (DRC) Finals are simultaneously the most important event in the field of robotics in years, and one of the most childish things ever cooked up by the Pentagon. On the one hand, the two-day contest being held at the Fairplex in Pomona, California on June 5 and 6 is the culmination of a high-profile, three-year international competition, with twenty four teams of roboticists now competing for $3.5M in prize money.

Those millions are a fraction of the overall funding already provided to many of the teams by DARPA, the Pentagon’s research agency. The DRC’s goal is to foster the development of robotic first responders, systems that could rapidly deploy to disaster zones considered too dangerous for humans. “It’s important to have robots at the ready, that are fully hardened, that can be rapidly deployed in these cases,” says Tony Stentz, leader of Carnegie Mellon University’s DRC team, Tartan Rescue. “Unfortunately they aren’t very common, and the consequences can be high. When Fukushima happened, we realized that we didn’t have any decent robots that could go in there. If we had, they could have opened some valves, and released gas, and avoided some of the explosions that occurred.”

But despite its sober mission, the particulars of this well-intentioned competition seem like doodles ripped from a 10-year-old’s notebook. What if, instead of moving around rubble, robots could simply pick up the debris and hurl it out of their path? And who needs specialized tools to cut through a wall, when machines can grab an off-the-shelf Sawzall and start buzzing away? And hey, wouldn’t it be cool if they could drive, not by interfacing with some robot car and its sensor suite, but by physically gripping a steering wheel with their mechanical hands? During DARPA’s last robot competition, driverless cars had to motor themselves around city streets without careening off the road, or into each other (both of which happened). Eight years later, the agency’s expectations have grown. In addition to climbing stairs, turning valves and opening doors, the machines that have advanced to the finals this Friday and Saturday have orders to drive a customized Polaris utility vehicle, by either cramming their rigid bodies into seats designed for humans, or else perching on top of it, like the world’s most awkward carjacker. Some number of robots in the competition are going to look like fools.

The human-centric nature of the eight known tasks that comprise the DRC has led to a thrilling design orthodoxy: nearly all of the robots are humanoids. Most walk on two legs, and manipulate their environment with human-like arms and hands. The few bots that aren’t bipeds, such as Carnegie Mellon’s CHIMP and NASA’s RoboSimian, either roll over obstacles, or scramble across them on all fours. And because DARPA has promised to squeeze communication signals to a trickle at some point during each robot’s time on the course, many teams have adopted a largely hands-off approach. A human might confirm which valve needs turning, but the robot will do the rest, determining how to approach, grab and rotate it. For systems that are not only walking on two legs, but navigating unfamiliar environments, this degree of autonomy is unheard of. Completing most of the DRC’s assigned tasks would be difficult enough during full teleoperation, with a team member constantly pulling the machine’s strings. Letting the bot control itself for long stretches is a profound leap of faith.

In addition to unprecedented robotic competence, the event promises to be a showcase for catastrophic incompetence. During the DRC Trials in 2013, the robots were equipped with “fall arresters,” tethers that prevented them from hitting the ground. The finals will feature no such fail-safes. In fact, falls are practically guaranteed. In order to win the DRC, teams must complete the most tasks in the shortest time. Bots are allowed two runs—one on Friday, and another on Saturday—but the emphasis on speed is bound to topple some systems. Will those unlucky robots survive their ordeal, and rise, triumphant, while the grandstands cheer them on? Or will they be hauled off the course, piece by expensive piece?

The DRC Finals are shaping up to be mix of cool robots doing cool things, and machines destroying themselves through slapstick. That’s the only hope for at least one or two systems achieving fleeting moments of human-level performance. If they can do that, they’ll be the kind of machines that have previously existed only in science fiction, and the first real glimmer of hope for a future populated by Rosie the Robot-style domestic servants. In fact, the competition isn’t even over, and it’s already made an impact on the field of robotics. In the run-up to the 2013 trials, Google essentially purchased whole sections of the DRC, when it acquired Boston Dynamics, the firm that DARPA had contracted to supply multiple teams with Atlas humanoids, and SCHAFT, the Japanese startup that wound up scoring the most points in the trials. But in a surprise move, Google decided to take SCHAFT out of the competition. Though no official reason was ever given, if Google hadn’t withdrawn, it might have been in the uncomfortable position of receiving more funding from the Pentagon, immediately after announcing that it wouldn’t be taking on any new military contacts. According to a current DRC team member, who did not want to be identified, this decision was good news for the remaining teams, joking that SCHAFT’s bot would have completed the DRC finals tasks “while holding a cigarette in one hand.”

Whatever its rationale for acquiring SCHAFT when it did, Google clearly changed the competition by pulling its frontrunner into the Googleplex. And if there’s any doubt that the DRC doubles as an open audition, consider that, when building its driverless car program, Google hired members from the top-scoring teams in DARPA’s last two robotics challenges. Those competitions—the Grand Challenge in 2005, and the Urban Challenge in 2007—are credited with kicking off the current race to build autonomous cars. With its broader focus on robots that can act as surrogates for humans, in environments built for humans, the DRC could attract investment in areas that are, at the moment, little more than discussion topics, such as machines that could function as live-in caretakers for seniors. And that’s just the most obvious example. The collective effort that’s gone into creating disaster bots can be applied to a wide range of other missions and classes of robots. In the coming days, our coverage from the finals will dissect the component parts of this landmark competition, and explore the major research areas and technical challenges that the DRC has both encouraged and paid roboticists to tackle.

If you want to watch this historic event for yourself, DARPA is livestreaming both days of the competition. Robots will be deployed in groups of four at a time, proceeding through identical versions of the course. It’s irrelevant who wins or loses those heats—all that matters is the robot’s task count and course time. Saturday should be more dramatic than Friday, as frontrunners emerge, and teams with slower times are tempted to take bigger risks. But consider yourself forewarned. As large as the DRC looms in the world of robotics, there’s a reason the finals aren’t being plastered across network TV. These robots are slow. The lack of safety tethers will add an element of suspense that was missing from the 2013 trials, and DRC program manager Gill Pratt has confirmed that there will be a ninth mystery task. Nonetheless, this is a research competition, not a sporting event, and the action will be intermittent, at best. So feel free to go about your weekend, doing what humans do in their spare time. We’ll be here in Pomona, keeping an eye on the robots.

Update: DARPA has posted the schedule for the first day. Since the teams that performed the best during their practice runs go later in the day, we have a sense of which timeslots might feature the most impressive matchups. In what amounts to an early upset, only one Atlas, from Team MIT, made it into the top two course windows. It will go up against three other bots, including fan-favorite RoboSimian, at 3pm Pacific. And the last runs will start at 4:45pm, featuring CMU’s CHIMP and two nearly identical humanoids. Also, the total number of teams has dropped from 24 to 23. We’re not sure why, but based on the falls that have already happened during the first official runs, the safe money is on carnage.