Twilight of the Bipeds: Could DARPA’s Robot Competition Kill Off Its Humanoid Stars?

There's Such A Thing As Too Much Falling 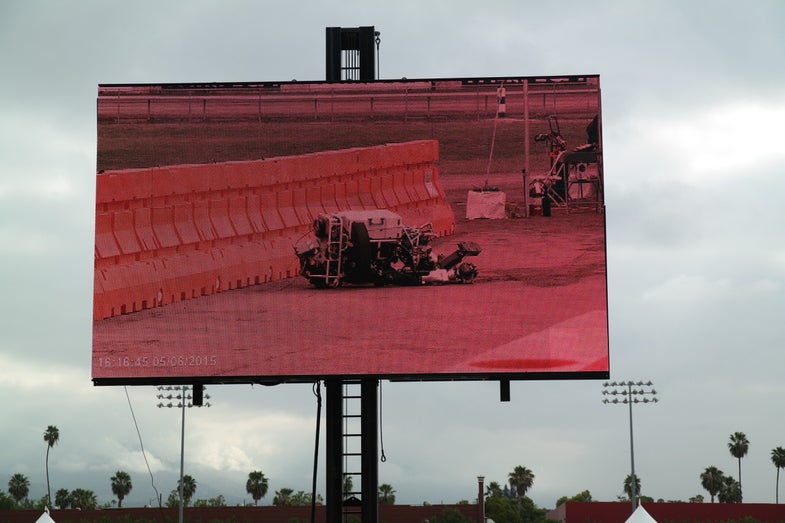 The second time the robot fell, it was perfect. The six-foot-tall, 400-pound humanoid machine was listing to the right, veering sideways as its hoof-like feet stamped forward. A collective “oh!” rose from the stands at the Fairplex in Pomona, California. The robot was not recovering its balance. The writing was on the wall—this thing was going down. And it did, staggering faster and further to one side, coming perilously close to the concrete divider separating it from other humanoid competitors at the DARPA Robotics Challenge (DRC) Finals. When it finally fell, the multi-million dollar robot landed in a heap, its shame plastered across the Jumbotron.

That was fall number two for Team HKU’s Atlas robot. The previous one happened so quickly, few spectators even noticed. The bot hit the dirt in the first minutes of the first run, on the first day of the DRC. It was a fitting way to kick off the world’s most ambitious robotics competition, where failure is the norm. Case in point: While HKU was once again hoisting its Atlas on a gantry, one of the three other robots trying to make it across the first section of the challenge course took a spill. It too had been trying to walk on two legs. And it would also wind up falling twice, before it even reached the doors, valves and power tools that make up the bulk of the DRC’s simulated disaster zone.

We’re only halfway through the first day of the competition, but the DRC is already threatening to become a graveyard for an entire design philosophy. Roboticists have known for years that humanoid machines were unstable. Walking, something that seems effortless to humans, with our giant brains, our decades of muscle memory, and our vast, self-correcting musculature, is one of the biggest challenges in all of robotics. Researchers have made impressive progress with two-legged bots, but look closely at those impressive videos of systems strolling around the lab or running on a treadmill. They are always supported by tethers, to catch them when they inevitably fall. One of the benefits of the DRC, with its emphasis on vehicles, stairs and other seemingly leg-friendly elements, is that its sped the development of bipedal mobility.

That was the idea, at least. Now, we’re seeing the hard results of that work. And, with few exceptions, it isn’t pretty.

Those robots in the first run of the day didn’t fall while attempting anything resembling fancy footwork. They were shuffling very slowly, and turning only occasionally, to make it around three Jersey barriers. There were other factors at play, such as an apparent lack of remote control—one of the DRC’s wild cards is the regular loss of communications between teams and their bots, forcing them to either wait for a better connection, or carry on as best they can. But if robots are this bad at walking in near-perfect conditions, who would ever want a human-size machine teetering around the house?

Later in the day, Team IHMC Robotics struck a blow for the humanoids, taking the points lead with its Atlas. Maybe more importantly, IHMC’s machine—nicknamed Running Man—managed to not fall down. Still, its mobility is painful to watch. At times, the Atlas just walks in slow motion, like a deep sea diver struggling with each step. Other times it looks adorable, with its tiny, cautious strides, the polar opposite of an athlete’s confident gait. But the Atlas always looks like it’s on the verge of toppling over. It has the suspenseful mobility of a toddler, with the added horror of being 6 feet tall, 400 pounds, and liable to kill itself with a single stumble.

And the crowd treated IHMC’s Atlas like a toddler, erupting in cheers at every minor victory, such as getting out of a utility vehicle, or walking a few feet without faceplanting. IHMC was expected to do well at the finals, having been one of the top scoring teams at the DRC trials in 2013. But it was competing relatively early in the day, indicated that it hadn’t scored particularly well during yesterday’s practice runs (DARPA schedules runs based on the previous day’s scores, with the best bots going last). Why was such a promising team competing the middle of the pack?

The answer doesn’t bode well for the future of humanoids. Like most of the biped teams in the competition, IHMC held back during its practice run. According to Tony Stentz, leader of Carnegie Mellon University’s Tartan Rescue team, most of the Atlas teams—there are six in all—scored 0 points in practice, meaning they didn’t complete any of the 8 assigned tasks. “Many teams did not want to put their robots at risk, for nothing more than pole position today,” says Stentz. “With a humanoid robot, they have too much to lose.” IHMC’s team simply drove down the course’s dirt track a few times, and called it a day. “They’re a very strong team. And they didn’t even take it across the finish line,” says Stentz.

CMU’s team was one of the few that attempted all 8 tasks during practice. But then, their robot, CHIMP, is an outlier. The 5-foot-tall, primate inspired bot has legs, but it doesn’t walk, instead rolling on tracks embedded in its shins and forearms. When it appears to be stand, it’s really kneeling, and is therefore rarely in danger of falling. Other bots, like NASA’s RoboSimian and the University of Bronn’s Team TimbRo, also use wheels, crawling, or a combination of both as an alternative to two-legged mobility. That inherent stability let CMU’s team hold nothing back, and post the second-best practice run, while gaining experience with the entire course. CHIMP competes in today’s final heat, while RoboSimian and NimbRo—a team with little funding, and zero buzz coming into the finals—will be in the next-to-last group. 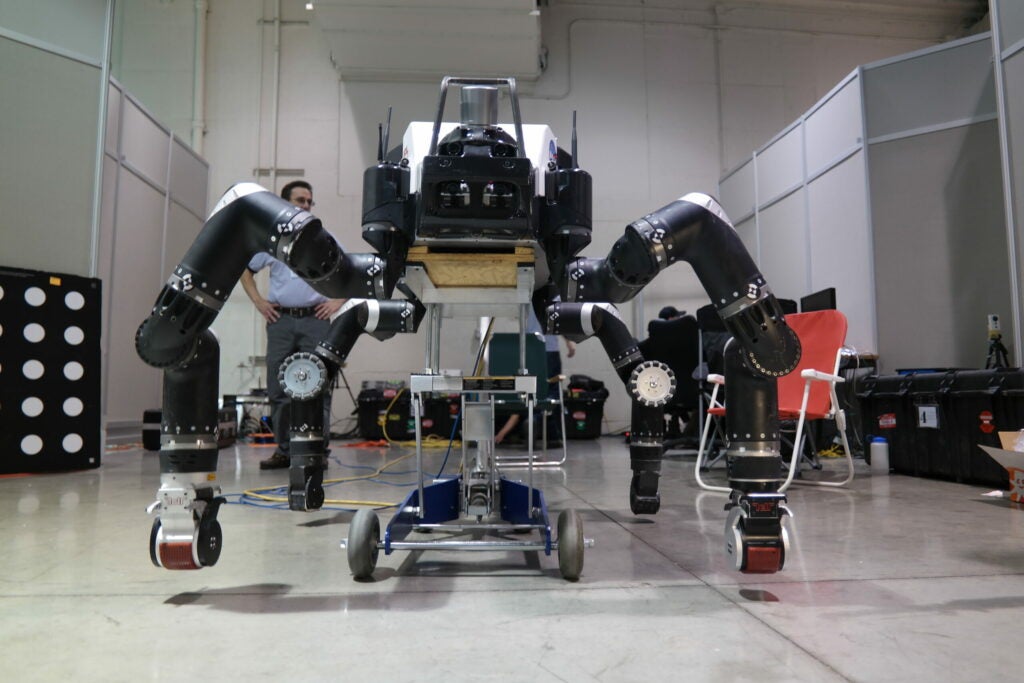 Most of the humanoids, meanwhile, saved themselves for the full competition. And the fact that this is such a solid strategy could be a problem. For nearly every application that’s been floated for tomorrow’s bipedal robots, durability and stability are essential. Domestic bots would be walking among some of the most vulnerable humans—children and seniors. Disaster responders should be ready to pull humans out of danger, or at least not crush the survivors they come across. Even if humanoids wind up sweeping the podium at the DRC, they could still prove themselves both too fragile, and too dangerous, to attract the funding necessary to finally make them viable. By creating the biggest showcase yet for bipedal robots, DARPA might be gently nudging the entire, ungainly lot of them right off the cliff.

It’s early, though, and the real action at the DRC is still to come. The humanoids have plenty of chances to stun the robotics world, or die trying.