Should we be excited or afraid? 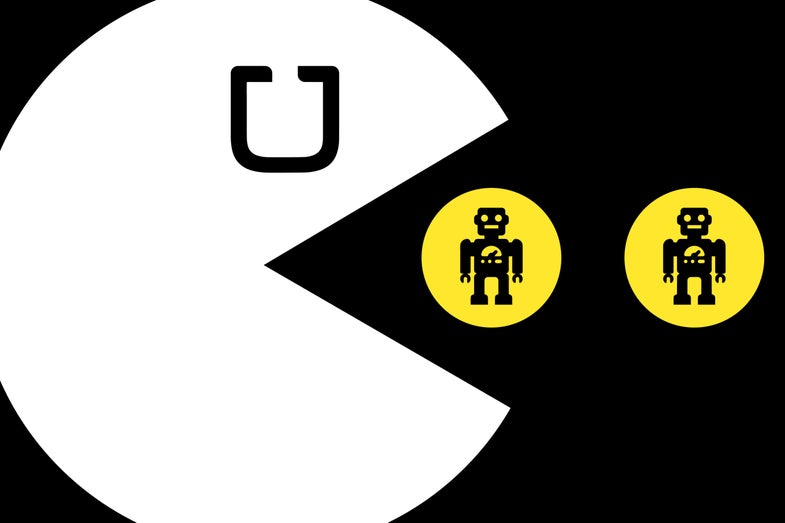 This past spring, two engineers huddled behind computer monitors as they fine-tuned a robotic ape. The 443-pound simian-inspired machine, called Chimp, would soon be competing in the Pentagon-funded DARPA Robotics Challenge. The competition to build disaster-response robots, which had started three years before, was nearing its final showdown. And Carnegie Mellon University’s Chimp was considered a front-runner for the top prize of $2 million.

But as Chimp went through its paces, the rest of the robots in the university’s cavernous National Robotics Engineering Center sat unattended. The center was typically a flurry of activity, with engineers hunched over terminals tethered to all manner of autonomous machines, including mowers, harvesters, excavators, and combat vehicles. Now, in the middle of a weekday, the lab—part of the biggest robotics program in the country—seemed abandoned. It looked more like a museum closed for renovations.

What happened to NREC? In a word: Uber. The San Francisco-based firm is an exemplar of Silicon Valley success, having reportedly raised $2.8 billion in funding on the strength of a single car-service app. Now Uber is racing to build self-driving cars. No longer content to take on traditional taxi companies, Uber hopes to use robots to lower fares, and ultimately compete with the entire automotive industry. “When there’s no other dude in the car,” Uber CEO Travis Kalanick said at the Code Conference in 2014, referring to the service’s human drivers, “the cost of taking an Uber anywhere becomes cheaper than owning a vehicle…and then car ownership goes away.”

This past February, the company announced a strategic partnership with Carnegie Mellon University (CMU) to develop the vehicles at the new Uber Advanced Technologies Center in Pittsburgh, temporarily located just a short stroll from NREC. Not announced was how Uber staffed up its center: by quietly siphoning personnel away from its partner. (Neither Uber nor CMU would comment on this.) By the time we visited, the startup had hired 40 or 50 of NREC’s roughly 150 researchers, including Tony Stentz, the roboticist who had served as the center’s associate director for 13 years and director for nearly five.

“Uber was incredibly smart in that it went to the one place, outside Google, that has all of the right people—people who actually have a shot at tackling autonomous driving,” says Boris Sofman, who studied robotics at CMU and had Stentz as an adviser. Like many CMU grads, Sofman went on to found his own startup, Anki, which makes autonomous toy cars.

Carnegie Mellon has long been a leader in robotics. It was the first university to offer a doctoral program in the discipline. Its contracts to commercialize robotic technologies at NREC routinely pull in an estimated $20 million annually. And its researchers pioneered robotic cars, winning the DARPA Urban Challenge with a driverless Chevy Tahoe in 2007. When Google started its self-driving-car program, it dipped into CMU too. “It’s not because we’re good; it’s not because we’re smart,” says William “Red” Whittaker, director of CMU’s Field Robotics Center. “It’s because, my God, we started so early, and we were so strategic, and we built an army.” 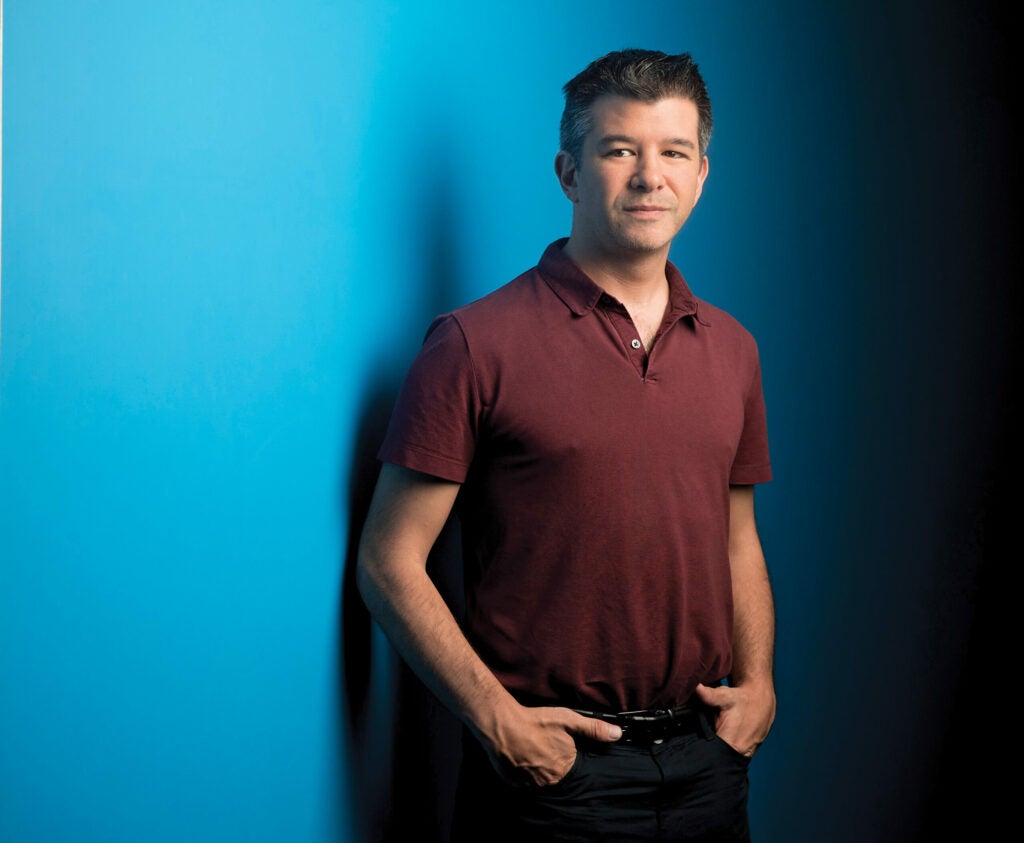 Uber’s CEO, Travis Kalanick, said that cutting out human drivers will make his service cheaper than owning a vehicle.

But when a third of your army decamps in the night, including its colonels, questions are inevitable. The most important one is this: What does the plunder of a leading research institute mean for the future of robotics?

Like most scientific pursuits, robotics thrives on collaboration across teams and projects. But as the field enters a new era of funding and interest, many of its most talented engineers are being cloistered out of sight. Amazon and Apple have been amassing in-house robotics teams, and keeping their work largely under wraps. Uber has asked its new hires to sign nondisclosure agreements. And when Google acquired eight promising robotics firms in late 2013, those companies immediately stopped discussing their research. One of those acquisitions, a Japanese startup called SCHAFT, built a humanoid S-One robot that dominated the first phase of the DARPA Robotics Challenge. Google pulled SCHAFT from the competition in early 2014, and S-One hasn’t been seen since.

Until Silicon Valley starts churning out actual robots, some think its newfound interest could hinder progress in the field. “I’ve been party to conversations in the upper crust of the research world,” Whittaker says. “The language that’s been used is the threat of a research drought. This vast, amazing talent is picked off in such a way that it takes a guy like me 10 years to make them, and an instant for them to disappear.” 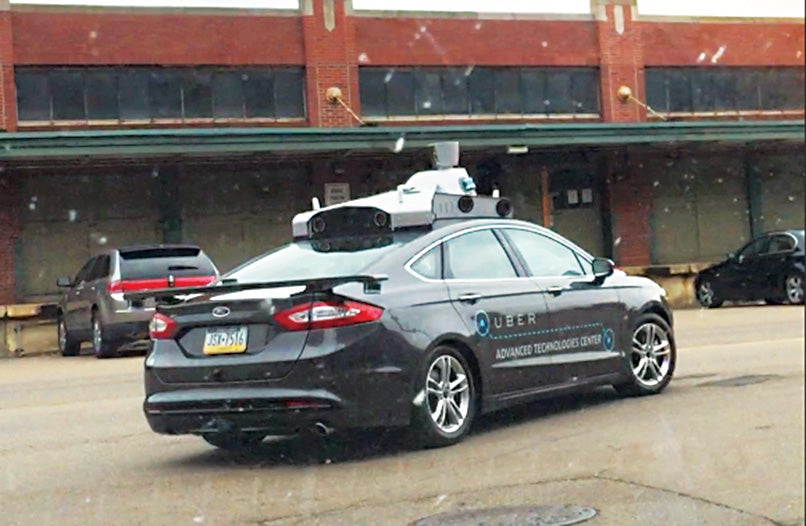 A few months after Uber opened its Advanced Technologies Center in Pittsburgh, a research vehicle was seen roaming the city’s streets.

Rich Mahoney, director of robotics at SRI International and president of the Silicon Valley Robotics industry group, argues that innovation is being smothered in the private sector. “There are hundreds, literally hundreds, of roboticists in Silicon Valley—extremely talented people—who are not engaged in the robotics community,” he says.

The newly cash-infused state of robotics has been compared to the early days of computing. Scrappy startups like Apple and Microsoft innovated themselves into positions to rival established players such as HP and IBM. What’s changed is that now firms like Google and Uber are pre-empting the development of a thriving startup scene by sucking up roboticists in large numbers. “Who are the visionary early-stage leaders?” Mahoney asks. “Who’s the Bill Gates and Steve Jobs of robotics? These companies have so many resources available that they can just go out and hire a block of talent. If they align that talent with the right products, they can do something really special. If they don’t, they’re just taking these players out of the market.”

While it would be easy to view CMU’s loss of talent as a casualty of Silicon Valley’s rapacious self-interest, most roboticists see it as affirmation. “There’s a brain drain from academia to industry right now,” says Vijay Kumar, a roboticist at the University of Pennsylvania and former director of the school’s GRASP Laboratory. “But if the direction of the brain drain were the other way, that means we’re in the wrong field.”

Earlier this year, Qualcomm Technologies acquired KMel Robotics, a startup spun out of GRASP Lab in 2011 that specializes in autonomous drones. Though the terms of the deal haven’t been disclosed, Kumar described the payout as “an ungodly amount of money.” Qualcomm is also spending $1 million on a four-month robotics accelerator program that culminates this fall. “I love the attention that the field is getting,” Kumar says. “I love that my colleagues and my students are being attracted by the Googles and the Qualcomms and the Ubers. The more interest that industry shows in the field, the more people will realize that to make a complete product, you need more basic research investment.”

“Uber went to the one place, outside Google, that has all of the people with a shot at tackling autonomous driving.”

There’s no question that the private sector can free roboticists up to do more, quicker. “The average professor will spend 50 percent of their time just writing grant proposals, trying to justify the research they want to do,” says Anki’s Sofman. Despite the promise of the DARPA Urban Challenge, it wasn’t until Google hired roboticists and started field-­testing autonomous cars that robot vehicles gained real momentum. Academia may have given birth to self-driving cars, but it was a corporation that set them loose in Bay Area traffic.

“It’s insufficient to just write research papers,” says Sebastian Thrun, a professor at Stanford University’s Artificial Intelligence Laboratory and founder of Google’s self-driving-car project. “At the end of the day, these products need to be built and brought to market to be impactful.” Thrun is perhaps more familiar with this issue than any roboticist, having worked as an associate professor at CMU before joining Stanford in 2003, and then switching to a full-time position at Google from 2011 to 2014. Though the scale of Uber’s recruiting drive surprised him, Thrun isn’t concerned by it at all. “I think it’s a sign of confidence, that the age of robotics has begun.”

Most in the field share Thrun’s opinion: that robotics has reached an inflection point. In addition to the recent headhunting and spate of acquisitions, venture capital has been flowing into the small outfits that haven’t yet been scooped up. Firms invested an estimated $341 million in robotics in 2014 alone. That’s tiny compared with other tech sectors, but it’s up from 2013 by more than a third.

As of press time, Uber still had job openings for 24 different types of engineers at its Pittsburgh research center. And a vehicle testing systems for its future self-driving car had already been seen on city streets. NREC, meanwhile, isn’t in what The Wall Street Journal called “a crisis.” The lab is hiring to fill vacant slots and actually expanding, adding new positions and seeking new contracts. Silicon Valley will be back and, like other universities with acclaimed robotics programs, CMU has to view its inevitable future personnel losses as victories for the field.

“The only metric of a technology is the extent to which it gets out there in the real world, impacts life, and generates wealth,” Whittaker says. “I haven’t spent a lifetime creating this stuff for it to gather dust in a basement.”

This article originally appeared in the September 2015 issue of Popular Science, under the title “Uber Powerful.”