What Must a Humanoid Disaster-Response Robot Do to Win DARPA’s Challenge?

DARPA has some details about its new Robotics Challenge, which we first told you about last week. Anyone have a... 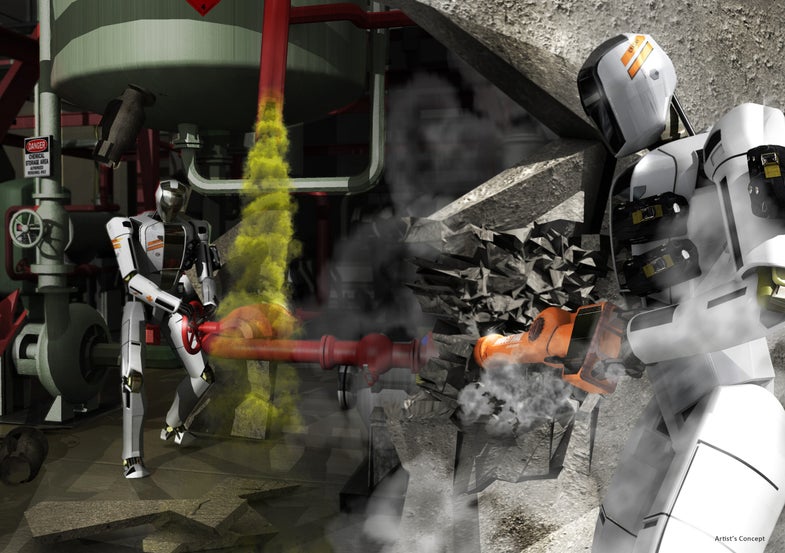 DARPA has some details about its new Robotics Challenge, which we first told you about last week. Anyone have a robot that can drive a car for a $2 million prize?

Formally announced Tuesday, the new challenge will take place during the next two years, with the first phase kicking off in October. The goal is to develop robots that can work in dangerous environments engineered for humans, not robots. They could potentially protect humans from harm by making repairs or scouting terrain. DARPA specifically mentions the nuclear disaster at Japan’s Fukushima Daiichi power plant as an example of why this type of robot would be useful.

The challenge is not focused strictly on humanoid robots, but some of the tasks — like driving a car and climbing a ladder — could be difficult for non-humanoid body plans to accomplish.

Interestingly, the competition is open to international teams, even those with no connections to an American company or lab — DARPA may be aware that American development of humanoid robots has lagged behind our counterparts in Europe and Asia.

Like we first heard last week, the challenge consists of several difficult tasks. The robot must:

These are just examples; the formal challenge will be more specific, according to the solicitation. DARPA might make it more difficult depending on how things proceed.

The agency is opting for a big-tent view, seeking input from universities, companies of all sizes and even individuals. “Achieving true innovation in robotics, and thus success in this challenge, will require contributions from communities beyond traditional robotics developers,” the agency’s announcement says.

In that sense, DARPA may be taking a cue from the success of the Flypmode crowdsourced car, also the brainchild of a nontraditional source. And the agency expects this competition to stimulate a new generation of robot enthusiasts and builders, such as through the FIRST robotics competition.

“The work of the global robotics community brought us to this point—robots do save lives, do increase efficiencies and do lead us to consider new capabilities,” said Gill Pratt, DARPA program manager, in a statement. “What we need to do now is move beyond the state of the art.”