The world is ending but our electronics look livelier than ever. 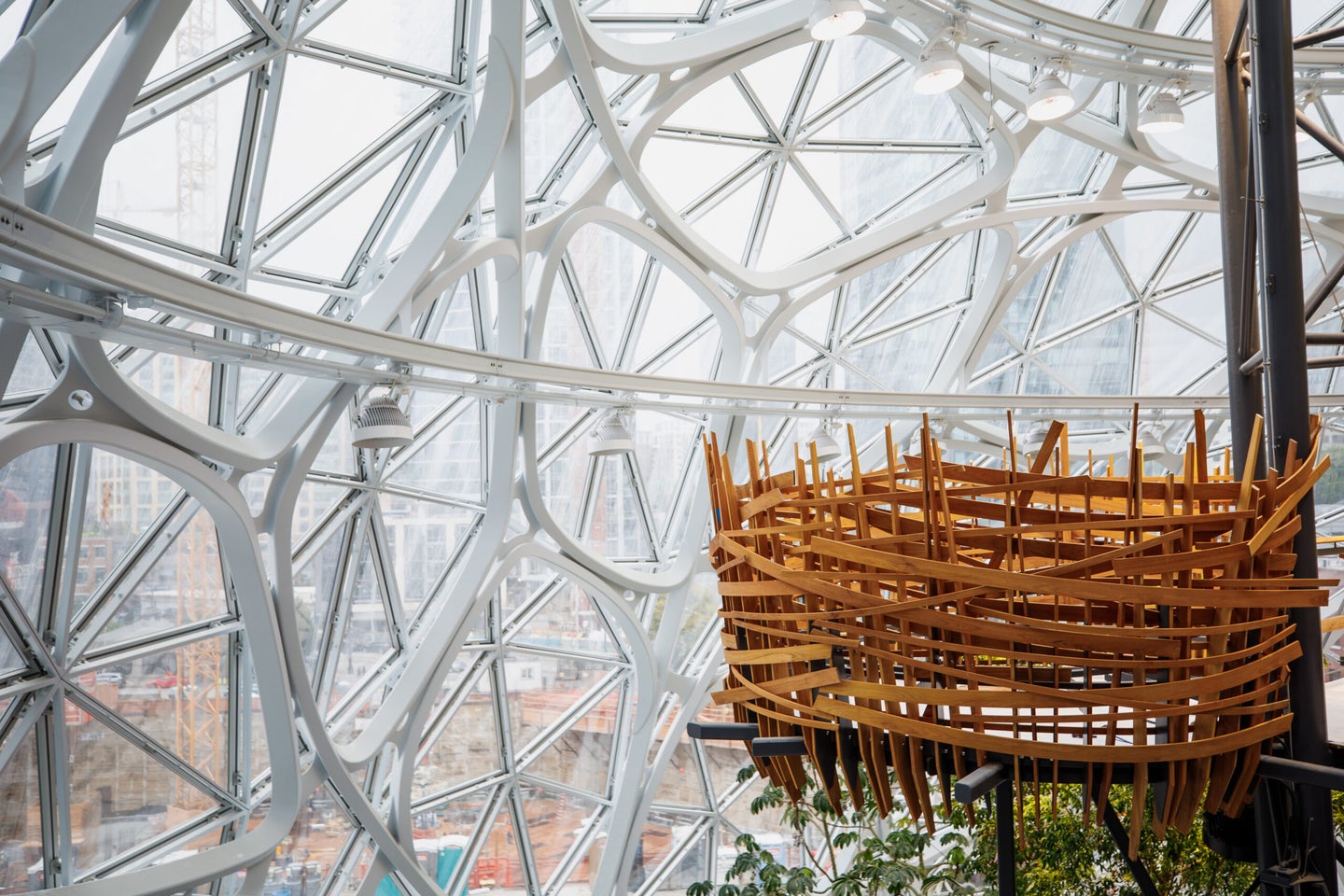 Earlier this month in Shanghai at CES Asia, representatives of tech companies large and small filed into a hotel ballroom for a session on designing technology with emotions in mind. Through a handheld radio, I listened to a translation of a presentation by Mianmian Zheng, trend director for WGSN, an international forecasting company. In painstaking detail, Zheng described exactly what consumers want their devices to look and feel like in the coming year. According to her PowerPoint, we are willing to pay for products that feel tactile, handmade, and imperfect—things that appear “pure.” We want earthy materials, like ceramic and marble, and warm colors, like chalk white, tangerine, and mint. Retro hints are welcome, but organic patterns, specifically those inspired by algae, are truly ascendant.

In other words, we want even the most artificial and advanced technology to feel like nature, even as the natural world is rapidly contracting.

This aesthetic, which elicits Pinterest-friendly terms like “urban earthy” and “modern organic,” has been slowly spreading for years—a metastatic peacefulness rocking the design world. It draws on chalk white’s other domain, minimalism, which evolved from a 1950s sculptural style to the spartan “religion of tech billionaires” like Apple’s fastidious founder Steve Jobs. While it’s traditionally been paired with simple sans serif fonts, the millennium garden vibe has recently incorporated some of the visual culture of the ’70s. There’s the sudden resurgence of puffy and playful typography like Great Jones, and the decorative dominance of “houseplant jungles,” popular among millennial “plant parents” whose obsession with fiddle leaf figs has restored the indoor garden industry to its former hippie-era glory (and profits).

These design principles are set to blossom in the coming year, according to WGSN. But they’re already popular among many online lifestyle brands. Last I checked, the website for Allbirds, Silicon Valley’s favorite eco-sneaker, shows models walking along beached logs, poured concrete picnic tables, and lichen-covered boulders. Bamboo shoots with cartoon arms and GIFs of wood chips turning to pulp remind browsers of the sustainable supply chain behind their shoes. Over on Everlane dot com, the domain of another left-coast clothing company, customers can take a peek inside the international network of factories. In geo-tagged images stylized like underexposed film, Everlane shows off the smiling workers who stitch together its bestselling Japanese GoWeave Essential Jumpsuit. This ideological moodboard—of openness, inclusivity, and oneness with nature, even in the face of conflicting evidence—even appears in contemporary architecture, the most permanent of canvases. Amazon’s biospheric Seattle headquarters contains “bird nest” meeting rooms, wooden walking bridges suspended mid-air, and an artificial cloud forest environment housing 40,000 plants. For those who make the cut, the invitation-only space provides a reprieve from the ceaseless construction sounds and frenetic sidewalks created by Amazon’s own unchecked growth.

But the brand perhaps most representative of this woodland aura is Innisfree, a popular Korean beauty company . The first time I visited Shanghai, China, in the summer of 2015, my Weather Channel-based app registered 106 degrees. In a sweaty late-night quest for soup dumplings, I threatened to lay down on a Beaux Arts-encrusted street in the Bund, the city’s iconic waterfront district, and never get up. That day, the air quality was so poor you could hardly see across the river, where some of Asia’s tallest skyscrapers allegedly twinkled beneath the sedimentary sky.

Between sun-drenched walking tours and smoggy street food stops, I sought refuge in the Bund’s enormous three-story Innisfree. Like all its stores and products, the space is inspired by the temperate volcanic island Jeju, off Korea’s southern coast. (It’s name, meanwhile, comes from the W.B. Yeats poem “Lake Isle of Innisfree.”) The exterior projected Eden: the rounded storefront is wrapped in green foliage and dotted with twinkling lights. And the bespoke interior, which the designers envisioned as a “natural sanctuary,” delivered. The ground floor offered an air-conditioned quiet, with boxed cosmetics arranged in soothing blocks of color atop shelves of light or white-painted wood. Upstairs, in the cafe designed like a mid-century modern greenhouse, I sipped on an iced beverage and tried to filter out the bustle of the 21st century street below.

At the time, Innisfree seemed like an innocuous reprieve from an otherwise hectic trip. In hindsight, though, the store feels like a symbol for the way many of us live now: In dense urban spaces, removed from nature but surrounded by increasingly high-tech “wellness” products, all set against the dreadful backdrop of climate change. When the Great Barrier Reef is dying, Google Smart Home Minis in “coral” or “aqua” offer the small comfort of constancy. When wildfires regularly blot out the California sun, a milky white iPad really does feel pure. And when temperatures constantly break new records, the LED lightning and Bluetooth thunder from artist Richard Clarkson’s $4,000 “Smart Cloud,” a fixture in many Innisfree storefronts, lets the right amount of weather into an otherwise climate-controlled box.

There was one other trend in the WGSN presentation. At the same that nature-inspired design is dominating, Zheng predicts the “supernatural” will continue to gain market share. It’s not as contradictory as it seems: While a soft orange can project the earthly mysteries of marine life, a more vibrant hue easily alludes to the Martian desert. One is a cozy simulacrum of this world; the other promises us an escape to another planet entirely. Huawei, the Chinese telecommunications giant, is emblematic of this futuristic shift. Riding up and down escalators in Shanghai’s subways after the conference, I saw the same ad over and over, of a woman with white-blonde hair stands in a powdery orange landscape. She’s promoting two phones, one an aggressive tangerine, the other a mercurial blue-purple gradient. It was the latter that transfixed me. Eventually, it looked less and less like a smartphone and more like an oblong mood ring. The verdict? Climate dread.