The pricey, small-batch lithium-ion powered Mini E has arrived. And it looks and drives like, well, a really quiet Mini Cooper 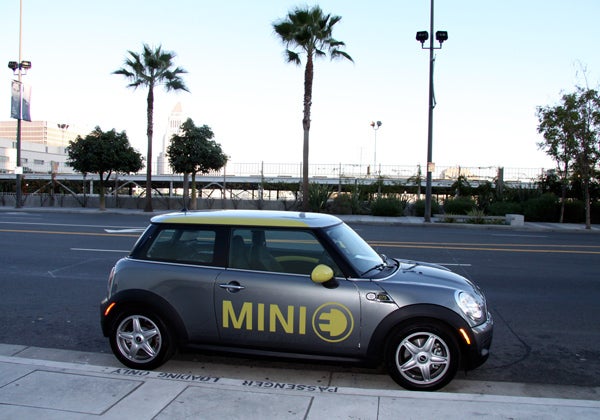 Regenerative braking, the process through which an electric car grabs otherwise wasted energy from the brakes as the car glides to a halt, is a brilliant bit of engineering for efficiency—take energy that’s otherwise only good for burning up brake pads, and turn it into electricity that charges the battery.

It may also make the uninitiated driver want to vomit.

This is what my handler told me as she guided me toward a fleet of Mini Es—electric Mini Coopers—parked in the basement of the L.A. Convention Center in downtown Los Angeles. See, regenerative braking starts to slow the car as soon as you let off the gas, as the braking system harvests the energy emitted by the decelerating vehicle. The experience can be unsettling at first—it can trick you into thinking you’ve been driving with the parking brake on. You might end up lunging unexpectedly forward in your seat as the regen takes over, until you learn to let this magical automatic braking system do its thing. It takes a little practice to learn to smooth the transition between speeding up and slowing down, between starting and stopping. Until then, Mini’s publicist told me, you might feel as if you need to pull over and grab some ginger ale.

But in my drive around LA in the Mini E, it took only a couple miles in the car to learn when to cede stopping power to the regenerative braking. By then I’d also gotten used to the other notable difference between this car and its gas-driven brethren—the eerie silence of a pure electric vehicle (the only sound is that of the tires rolling along the pavement). The Mini E is no glorified golf cart. It’s a little slow off the line, but once you get moving acceleration is impressive. On one traffic-free straightaway I hit the accelerator and realized I’d been underestimating this car: My head snapped back as the car launched ahead. The route Mini planned for me didn’t include any freeway driving, probably because I’d just end up sitting in traffic, but the car has a top speed of 95 mph. In other words, the Mini E drives pretty much like a normal Mini Cooper.

It looks pretty much identical to the standard Mini Cooper, too, but there are interesting differences. What used to be the backseat is now filled with lithium-ion batteries supplied by AC Propulsion. (That company supplied the entire powertrain—batteries, motor, power electronics and all.) Behind the steering wheel you’ll find a battery-charge gauge. The cars are numbered. They come with a custom charger that churns out 240 watts at 50 amps, which means you can charge the car fully in two to three hours. 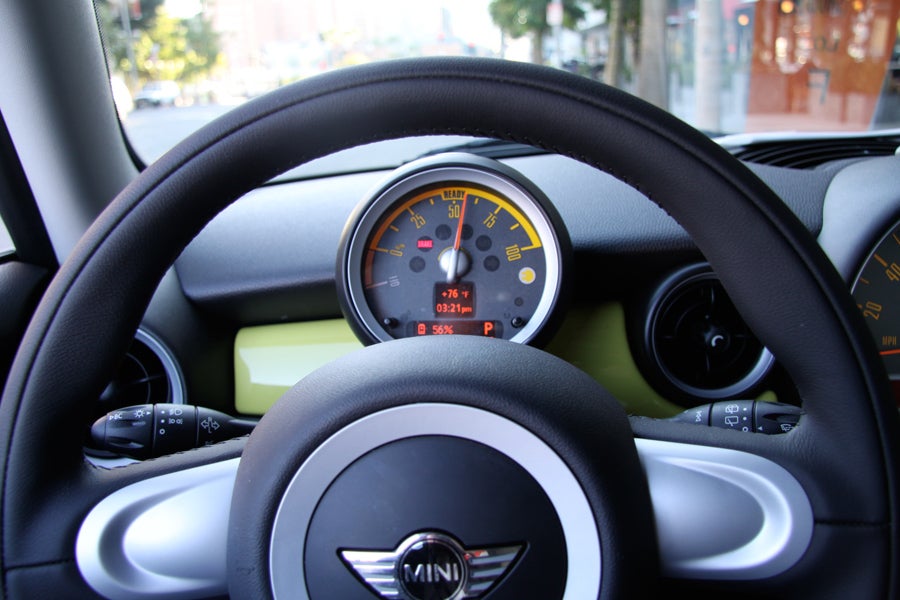 When released, the Mini E will be the only purely electric car on North American roads.

The Mini E project is essentially a test fleet, a way for the BMW group (which owns Mini) to hedge its bets as the auto industry claws through uncertain times. BMW wants fresh experience with electric cars. (Presumably they also want California zero-emissions vehicle credits.) But yesterday, at the same Los Angeles Auto Show press conference at which Mini premiered its new electric car, BMW unveiled a turbo-diesel variation on the 3 series. BMW already has hybrid and hydrogen concepts in its lineup. With the Mini E, it has now dipped its toes into every corner of the alternative-powertrain pool.

The Mini E will soon be the only pure electric car on American roads in any significant numbers. Could it help normalize electric cars, help get drivers used to the idea of a future in which our tiny cars are silent, zippy, and potentially nauseating? It’s not going to make any kind of meaningful dent in oil consumption or CO2 emissions, after all. The Mini Es will go to drivers in LA and New York City who endure what Mini boss Jim McDowell describes as an “adoption” process and then pay the $850-a-month lease to score one of the 450 cars. That’s not a lot of units. Still, it’s far more than any other automaker is likely to have on the road any time soon. Tesla has delivered less than a couple dozen cars so far. Other automakers, most credibly Nissan and GM (we’ll set aside GM’s extinction-level crisis for the moment) have promised to bring electrified cars to the U.S., but those cars don’t arrive until 2010 at the earliest. For the next year or so, the Mini E will be the face of EVs in America. And so maybe it’s a good thing that the Mini E so closely resembles the wildly successful Mini Cooper: Maybe it can assure people one by one that a future without growling gas-guzzling engines isn’t such a strange, scary thing after all.