From DARPA, some very tiny suction. 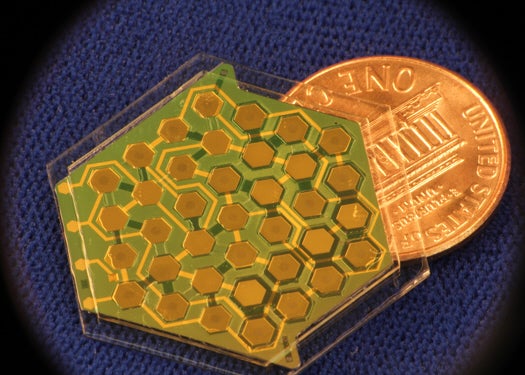 Those hexagons are tiny vacuum chambers, and the lines between them are pumps and valves. DARPA
SHARE

Five years ago, DARPA challenged researchers to create a vacuum system smaller than a cubic centimeter and powered by just a quarter-Watt of energy. This week, DARPA announced the program’s success. Researchers at University of Michigan, MIT, and Honeywell International have each demonstrated penny-sized micromachines that pave the way for scaled-down chemical sensors.

When the project started in 2008, the goal was to create a smaller chemical sensor, useful for detecting chemical weapons. Mass spectrometers are devices that identify chemicals by using vacuums to measuring their mass. Because the device only needs to measure a few molecules, these vacuum chambers can be incredibly small. Due to technology limitations, mass spectrometers have been using vacuums chambers much larger than necessary.

Pictured above is one of the devices that solves this problem. The model, from the University of Michigan, features hexagonal chambers and a connecting series of pumps and valves.

Now that the tiny vacuums exist, it will be fascinating to see where they turn up. The original goal of a chemical detector fits with DARPA’s military focus: a mass spectrometer built around these new vacuums could fit on a micro-drone, creating a hard-to-detect and easy-to-maneuver craft designed to sniff out chemical weapons.

Another possibility, once the technology becomes cheap enough, will be incorporation into consumer electronics. DARPA programmer Andrei Shkel anticipates better atomic clocks, which need vacuums to function. Personally, I’m interested in the generation of smartphone that can sniff restaurant food for suspicious compounds.