The secret to fighting a war at night? Tiny, tiny, tiny pixels. 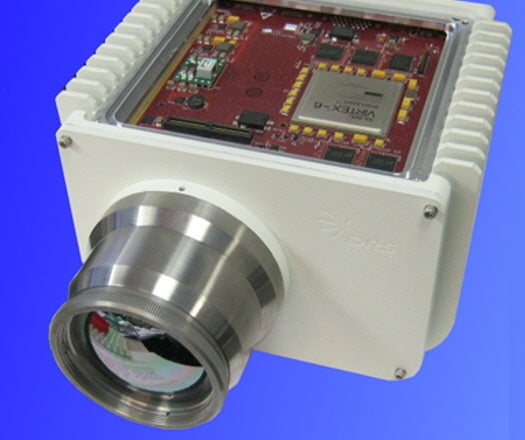 Human eyesight is such a limiting factor in military missions that DARPA is trying to fix it. Not with lasers; those are reserved for ships, but instead with a new infrared camera using pixels only five microns wide.

Smaller pixels mean a high-resolution image can be captured in a tinier package. There are existing miniaturized infrared cameras, but their pixels are about three times the size of DARPA’s latest, and their resolution is at best half as good. The new technology has made it possible for the portable camera pictured above to do the work of the sort of long-wave infrared (LWIR) camera that till now has required a truck to carry.

That tiny package should enable U.S. troops to finally master one of the great challenges of history: how to take advantage of the limits of enemy eyesight while bypassing the same limitation.

Soldiers spent centuries figuring out the best way to see enemies at night without being seen. Early methods, like carrying torches, were more dangerous for the torch-carrier than his target, as the enemy’s eyes were already adjusted to the night, and the torches revealed where the advancing soldier was. In light of this, night attacks were relatively rare historical events, and daytime fighting remains the norm for regular armies.

This is frustrating for commanders looking to exploit every possible advantage to win, because night attacks have some pretty distinct advantages. A larger portion of the enemy army is usually asleep, rarity adds an element of surprise, and the darkness, undisturbed by torches, lights, or a bright moon can conceal an army.

Advancing without seeing is pretty difficult, however, which means a technological solution is the way around it. Night vision goggles, the ones with that famous green filter, amplify available light, which can turn low visibility into high visibility. The problem comes with regular light sources, which night vision also amplifies to a blinding extreme.

Infrared, instead, focuses on a different part of the visual spectrum, and so is less affected by sudden changes in visible light. Previously, however, infrared cameras this advanced have been too large for individual people to carry, and instead had to be mounted on vehicles, which are not nearly as stealthy as troops on foot. With the new camera, DARPA hopes they can outfit individuals with such cameras, making night raids or defending against night raids that much easier.