How Will We Keep Track Of Our Robot Minions?

In the future, when machines run our lives, we'll need a way to keep tabs on all those helper bots. Two researchers have come up with a solution. 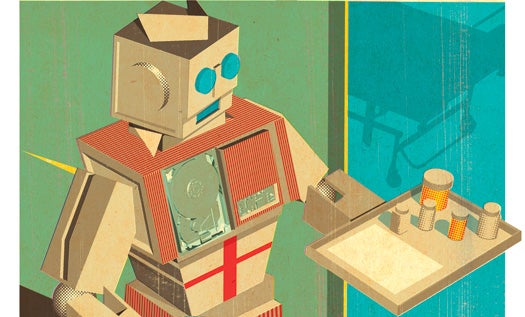 The trickiest part of a future filled with helpful robots (think Roombas, but for everything) is keeping track of them all. Researchers at Wayne State University published a clever solution to this problem.

First, a robot minion has to figure out where it is. To accomplish this, the LOBOT system uses a GPS receiver, a 3-axis accelerometer, a magnetic field sensor, and multiple motor rotation sensors. Because the GPS sensor is extremely energy-intensive, it only infrequently checks the absolute position of the machine. The magnetic field sensors, accelerometer, and motor rotation sensors keep the location information up-to-date by helping to calculate the robot’s change in position relative to its previously determined GPS location. Together, these processes give a good approximation of the robot’s absolute location. If this GPS-and-accelerometer strategy sounds familiar, it should: That’s how cell phones determine location. The researchers specifically used an unlocked HTC Legend smartphone for the parts, and even powered the LOBOT location system from the phone’s battery. Below is a LOBOT system assembled from a Lego robotics kit and a smartphone, attached to a small tracked robot: 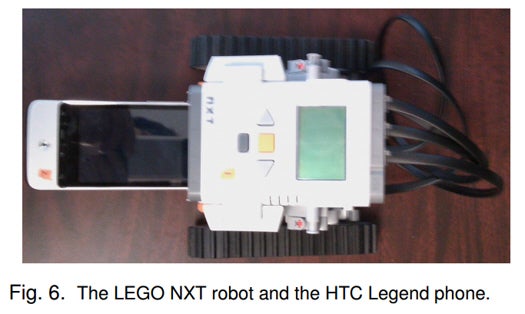 A LOBOT system made with LEGO parts and a smartphone

Besides the fact that it would be fairly cheap to attach LOBOT systems to your Roomba army, the best part is that it all works with existing infrastructure. GPS is unlikely to go away any time soon, so a LOBOT standard for robots allows them to be tracked and integrated into the world as it is, without needing any major changes.

Which means more robots, sooner. This is a pretty great future.

The paper appears in the the April issue of IEEE Transactions on Parallel and Distributed Systems.