Magnetic Graphene Clouds Can Be Made To Appear And Disappear

Toggling graphene's magnetic field on and off could lead to faster, smaller electronics. 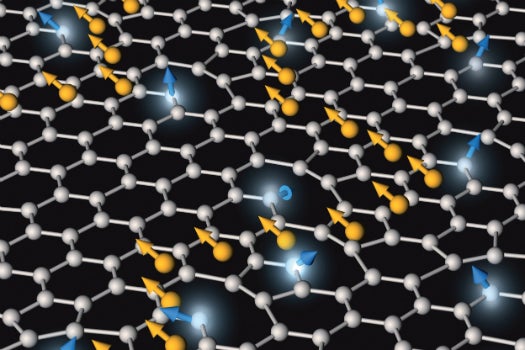 Add another point to the list of reasons why graphene, the darling child of material physics, is a wunderkind. A team led by researchers at the University of Manchester has succeeded in turning magnetism on and off in graphene, an important step for the field of spintronics, the study of the way electrons spin in solid-state physics.

Spintronic memory has great theoretical potential to make computers faster and more efficient, but scientists have struggled to switch magnetic fields on and off the way electronic transistors do.

As announced in Nature Communications last week, we might come a little closer to spintronic transistors with graphene. When carbon atoms in graphene’s honeycomb-like structure are removed, electrons around the resulting holes form clouds that act like microscopic magnets. The researchers found the electronic clouds could be dissipated and condensed again, switching off the magnetism.

Irina Grigorieva, who directed the study, explained the achievement in a press statement:

This breakthrough allows us to work towards transistor-like devices in which information is written down by switching graphene between its magnetic and non-magnetic states. These states can be read out either in the conventional manner by pushing an electric current through or, even better, by using a spin flow. Such transistors have been a holy grail of spintronics.

Another co-author, Antonio Castro Neto of the Graphene Research Centre in Singapore, added that this could lead to a new type of magnetic device that would be as thin as a single carbon atom. “These new devices can be incorporate [sic] in electronic circuits in order to create functionalities for control of magnetism and charge that did not exist before. They unify magnetic memories with electric circuits,” he said in the statement.