It's an experimental "x-ray vision" device that's designed with everyday users in mind. 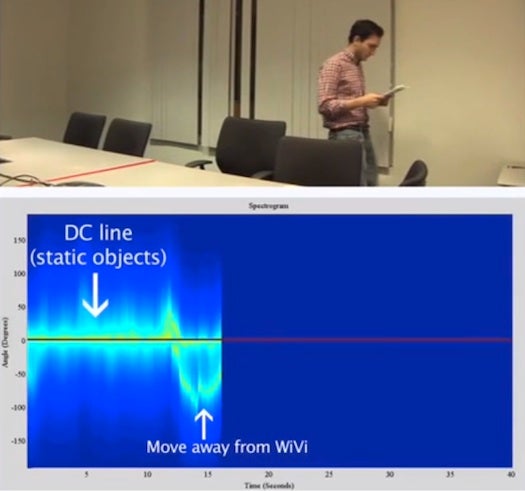 Ever wished for X-ray vision? In the future, you could get something like it from a handheld device.

Engineers at MIT have made a prototype of a portable device that users can point at walls to get data on anything moving on the other side. The system, called Wi-Vi, shows whether people are moving closer or farther away from the wall. It’s able to capture movements as small as a step to the side. You can see what the output data look like here:

Something like Wi-Vi could help police officers and rescue workers find people either hiding or trapped in buildings, according to MIT News. Because Wi-Vi detects movements, it could also be rejiggered to fit into a system that turns on lights or controls other things in a house with the wave of the arm. It might also make for a better motion-controlled gaming system—like a next-generation Microsoft Kinect—that doesn’t require players to be within the line of sight of a detector.

Researchers have long worked to come up with X-ray vision machines. Other experimental devices have generally been larger and more expensive than Wi-Vi, the system’s creators wrote in a paper they’re presenting this August at a conference hosted by the Association for Computing Machinery. “We wanted to create a device that is low-power, portable and simple enough for anyone to use,” Dina Katabi, an engineer who worked with her graduate student Fadel Adib to create Wi-Vi, told MIT News.

Wi-Vi works by emitting Wi-Fi signals at a wall. Some percentage of those signals penetrate the wall, reflects off people on the other side and then returns through the wall to the Wi-Vi device. The Wi-Vi array emits two types of signals that are the inverse of one another. If both signals hit a still object, such as any furniture or the wall itself, they cancel each other out. If they hit a moving object, however, the canceling effect doesn’t occur and the moving things show up in the Wi-Vi.

Once Wi-Vi finds a moving person, it’s able to track that person easily while ignoring all the still stuff around him. It’s also able to track more than one person at once. In their paper, Katabi and Adib showed Wi-Vi’s distinct output for three people.

Other recent X-ray vision efforts include a system published in 2011, also developed at MIT. That machine was an 8.5-foot array designed with the military in mind. In 2012, a team at the University College London came up with a cheaper system that uses Wi-Fi signals, like Wi-Vi does. The London system required a device planted in the room with the people you want to detect, however, so using it would require a bit of planning.