It can climb ladders, open doors, and it's coming to rescue you. 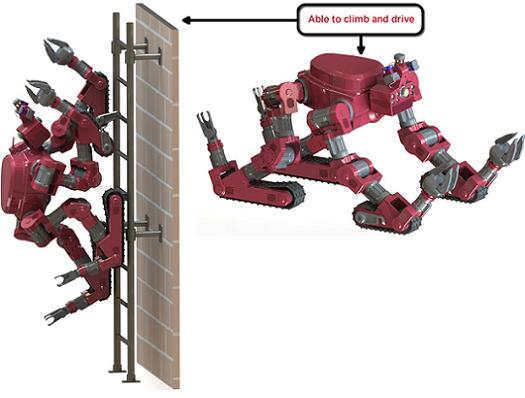 Chimpanzees? Cool. Tanks? Cool. Robots? Also cool. Combine them, and you have either the best transformer ever, or Carnegie Mellon’s new human-sized robot chimp tank.

Named the CMU Highly Intelligent Mobile Platform (CHIMP, because clever), the four-limbed robot is designed to compete in the DARPA Robotics Challenge. The challenge seeks robots that can wander into places where it’d be unsafe to send a human, like a failed nuclear reactor or houses after an earthquake. The challenge also solicits robots that can use human tools to do everything from open doorknobs to drive cars. There are several proposed designs, ranging from the humanoid to the spidery.

But CHIMP is the most, well, chimp-like. Similar to a chimpanzee, it has hands–complete with opposable thumbs–at the end of each limb that can grasp objects.

Most of the time, though, CHIMP resembles and acts more like a LEGO tank. Each of those four limbs has a section of tractor-like treads, which move easier over uneven terrain than most bipedal robots. 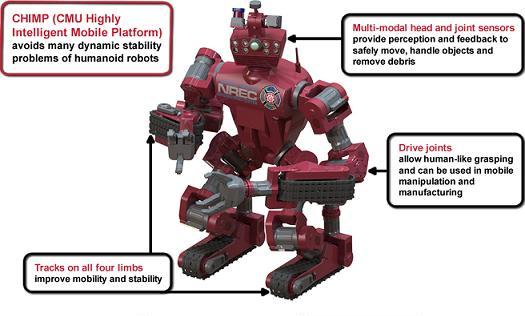 A shiny robot chimp tank is nothing without good software. Internal intelligence software helps it avoid collisions, stay balanced, and avoid harm. CHIMP is piloted remotely, by an operator using a large monitor, keyboard, and mouse, and the operator can take a more or less active role, depending on the need. (Normally the robot chimp tank can navigate fine by itself, but if it gets stuck the operator can take over, controlling each individual joint if it has to in order to free CHIMP from whatever obstacle has it pinned down, say, if its leg fell through an earthquake-damaged floorboard.) All of that is great, inventive and functional.

And, let me just repeat, it’s housed in a robot chimp tank.