America's favorite shambling robo-donkey is about to become even more alarming. 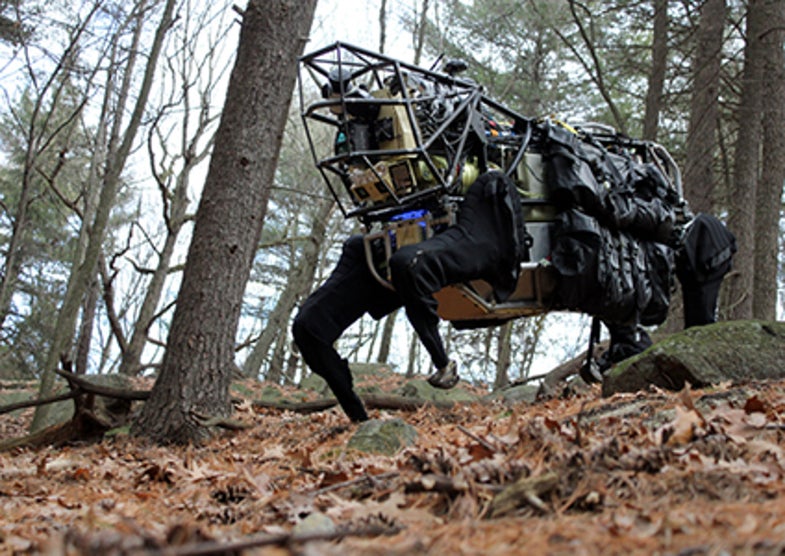 BigDog is a cinderblock-hurling robot that shambles like a something out of Lovecraftian horror. DARPA and Boston Dynamics are developing the four-legged robot to go anywhere troops can go on foot, while carrying up to 400 pounds of gear for them. It’s basically a donkey, except without a head or any distracting biological needs.

Last week, DARPA awarded a $10 million contract to Boston Dynamics to further develop BigDog, with a planned culmination in a military exercise two years from now. To reduce risks to soldiers in combat, the research agency has asked Boston Dynamics to build a quieter and more bullet-resistant version of the robot. Scary.

Ideally, the average soldier carries no more than 48 pounds of gear into battle, and 72 pounds when marching. War rarely meets ideal conditions. Paratroopers fighting in Iraq in April 2003 carried up to 101 pounds, which rapidly led to exhaustion and proved taxing even for physically fit soldiers. Body armor accounts for between 20 percent and 30 percent of the weight, and obviously must be worn by the soldier. But spare batteries, extra socks, hygiene kits, and ponchos don’t always need to be carried by humans. BigDog would follow closely behind a leader and obey voice commands. It could also serve as a mobile power station, recharging batteries for troops on the move.

While BigDog development continues, Marines at Fort Devens, Mass., are set to test the robot as-is this November. Walking at a pace of 7 mph to 8 mph, the robot should keep up with the Marines, and do so as quietly as any trooper.

Watch a video of Big Dog below: