This material is 100 times lighter than styrofoam--but it's also really strong! 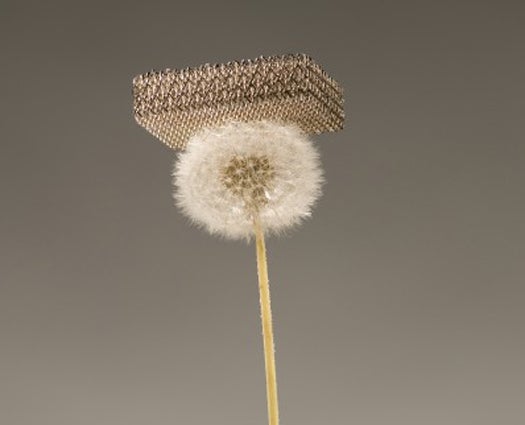 The researchers collaborated with scientists at Caltech and UC Irvine to design metallic microlattice, a mesh lighter than styrofoam, for aerospace structural components. The material is so light, it can sit atop a dandelion without crushing it.

But that doesn’t mean it isn’t strong. The material can handle a strain exceeding 50 percent in compression tests and still resume to its original shape and 98 percent of its height once the load is removed.

Other materials that fall into the ultralight category (below 10 mg/cm3), such as silica aerogels, carbon nanotube aerogels, metallic foams and polymer foams, have very random cellular architectures. This means that while these low-density materials retain benefits such as high specific surface area (total surface area for a material per specified unit), they lack the stiffness, strength, energy absorption and conductivity of heavier materials. HRL researchers created a material that is both ultralight and structurally robust.

The key structural component is a series of hollow tubes. In a study published last November in Science, the researchers exposed a light sensitive liquid to UV light through a patterned mask, which created a three-dimensional photopolymer lattice. They then deposited a layer of nickel-phosphorous onto the polymer lattice, which was then etched. The remaining structure was a macroscopic material with hollow tubes as the base structural elements. The resulting material had a density of .9 mg/cm3. By comparison, ultralight silica aerogels are 1 mg/cm3.

Though metallic microlattice is the lightest metal developed to date, it held the title of lightest material for less than a year. Aerographite, a carbon material developed by researchers at the Technical University of Hamburg and University of Kiel (and first reported in an Advanced Materials article in June 2012), weighs in at just .2 mg/cm3.