Windmills in the Sky 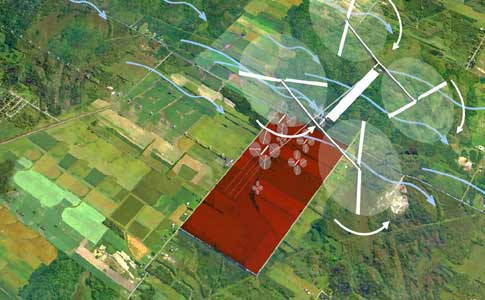 Wind power is the world´s fastest-growing energy source. Existing capacity worldwide is approaching 50,000 megawatts-roughly equivalent to that of 50 nuclear power plants. But there are problems with this seemingly benign wellspring of pollution-free electricity. Aside from being noisy, the whirling turbines interfere with television reception and are generally considered terrestrial eyesores rendered useless when the wind stops. Bryan Roberts, an engineer at the University of Technology in Sydney, Australia, has a solution: Instead of erecting wind turbines on the ground, float them in the jet stream, a screamingly fast current of air that circles the globe, fluctuating between altitudes of 15,000 and 45,000 feet.

Roberts has partnered with three other engineers to form Sky WindPower, a San Diego, Californiaâ€based start-up that is developing something it calls a Flying Electric Generator (FEG). As Roberts envisions it, huge squadrons of airborne FEGs will hover in the jet stream like giant kites. Winds of up to 200 miles an hour will spin rotors on the FEGs, generating an electrical current that´s transmitted along superstrong tethers to ground stations linked to the utility grid. â€You might have 600 of them, each producing 20 megawatts,â€ he says. â€They could generate enough power for two Chicago-size cities.â€

In the next two years, Sky WindPower intends to build a working 200-kilowatt version and fly it in a remote area in the U.S., provided the Federal Aviation Administration will grant the com-pany permission to do so. â€We´ve done all the designs, sizing, weights and costs,â€ Roberts says. â€Now we just need $4 million to build the prototype.â€

1. THE FLYING FARM
The FEGs will be clustered in 200-square-mile aerial wind farms. Each turbine will be constructed from typical aircraft materials-carbon fiber, aluminum and fiberglass-and weigh 45,000 pounds. The FEGs will feature four 130-foot-diameter rotors engineered to both generate electricity and control the aircraft.

2. DUAL-PURPOSE TETHER
The FEG will be fixed to a three-inch-thick tether that moors each craft to a winch at the ground station. The tether will conduct 20,000 volts through two insulated aluminum filaments, wrapped around a core of Vectran, a high-strength, lightweight fiber used in everything from tennis-racket strings to the airbags that cushion NASA spacecraft.

3. CATCHING AIR
On liftoff, the FEGs will function like helicopters. Electricity from the ground station will spin the rotors horizontally, carrying the craft upward. Once near the jet stream, the rotors will be tilted upward roughly 40 degrees, producing less lift but more torque for spinning the turbines.

4. FINE-TUNING
The FEGs will be outfitted with computer-aided pitch control. As the jet stream fluctuates in speed, an onboard system will adjust the FEG´s vertical stabilizers, tilting the rotors upward or downward to optimize their angle in the wind.