Last night, Google announced that it has agreed to invest heavily in a proposed $5 billion, 350-mile power transmission backbone... 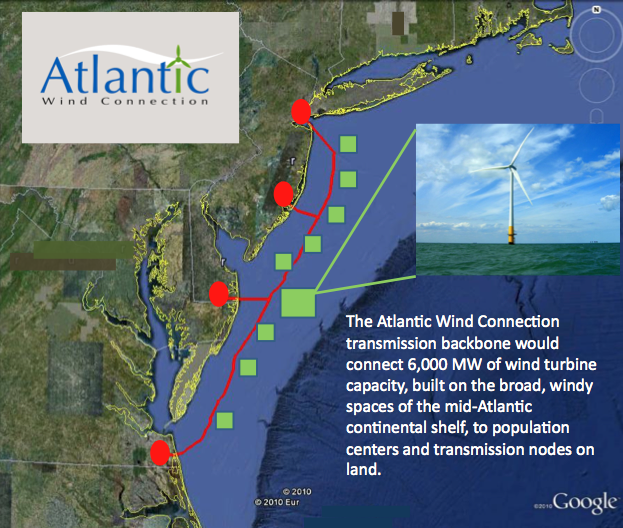 Last night, Google announced that it has agreed to invest heavily in a proposed $5 billion, 350-mile power transmission backbone that would provide infrastructure for future offshore wind projects along the mid-Atlantic coast. But even with the backing of one of the world’s mightiest tech companies, various financial investment firms, and many important officials in government, the transmission line is going to be something of a technological trick.

The Atlantic Wind Connection (AWC) will stretch from New Jersey to Virginia, moving power up and down the shoreline to the highest capacity markets along the coast. As envisioned, it would eventually link some 6,000 megawatts worth of offshore wind turbines into the land-based transmission system, supplementing traditional power infrastructure with enough power to serve some 1.9 million households. Even before wind farms are constructed, the AWC would ferry cheaper power from southern Virginia to expensive energy markets in New Jersey.

The cable itself will be copper lined with about 2 inches of insulation, and it will be big; each foot of cable will weigh about 30 pounds. To bury it in the seafloor a jet plow – a tool that shoots ocean water into the sea floor at high to pressures to blast a trench – will cut a path for the cable, which will eventually be covered over again with sediment.

There are already some undersea transmission lines running off the Atlantic Coast, but this is the first line that will collect power from generators along the way. This presents a particular technological challenge. The AWC will carry direct current rather than alternating current like the onshore grid. DC is more efficient at moving power over long distances, but DC works best for point-to-point transmission rather than lines that have many inputs and outputs along the way.

To make the AWC work efficiently, the system will employ a series of substations along the way that section it off into a series of direct journeys rather than long line with lots of entry and exit points. Like offshore oil platforms, these intermittent platforms will absorb the power from future wind farms and introduce it to the grid via four connection point in Virginia, Delaware, and southern and northern New Jersey, saving wind developments the trouble and expense of having to build their own connections to shore. That in turn should lower the cost of entry for offshore wind projects, hopefully spurring development along the coast and making way for a future where alternative energies make up a bigger share of America’s energy portfolio.