In The Netherlands, A Giant Wind Turbine For People To Live On 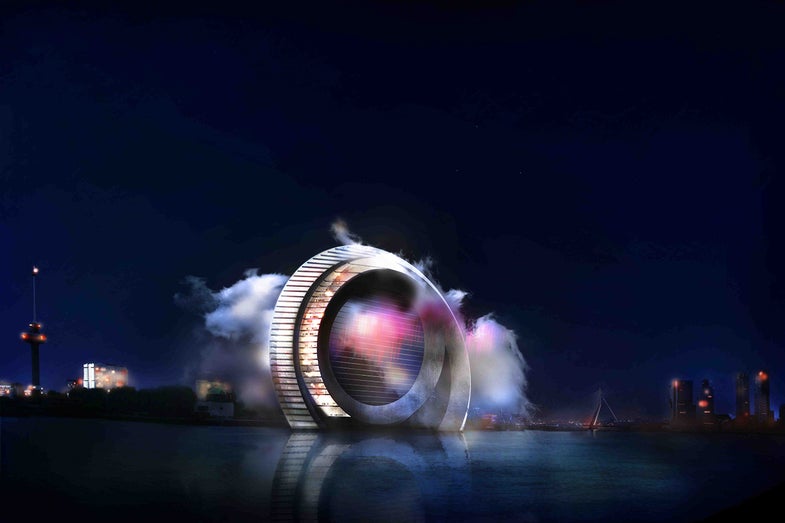 Instead of tilting at windmills, how about living in one? The Dutch Windwheel is a giant proposed wind turbine for the city of Rotterdam in the Netherlands, which will feature apartments and hotel rooms along the outside of the structure.

Artist’s images of the Windwheel at night look a little like a Stargate or the eye of Sauron, but the designer’s vision for the circular skyscraper is more sustainable than storybook.

The central area of the building would be occupied by a power generator that harnesses the wind to produce electricity. Unlike other wind power systems, the system, EWICON, uses no moving parts, relying on the wind to push charged particles in particular directions to generate energy. Check out this video to get a more in-depth explanation.

The technology was developed on a small scale by researchers at the Delft University of Technology two years ago. The fact that it’s unproven at larger sizes may make it difficult for the building to become a reality, though the university webpage does say that “The EWICON will be developed further if funding is secured for follow-up research.”

The rest of the Windwheel will consist of two rings, an inner ring with apartments, restaurants and a hotel, and an outer ring with a ride that sounds like an informational roller coaster. Tourists will be able to ride to the top of the structure and learn about the Netherland’s efforts to control the water that is constantly lapping at the borders of the country.

Adding to the sustainable image, the building will feature water recycling, a small plant to turn waste into biofuel and solar panels along the facade.