Found: A Batch of DNA Molecules That Seem To Have Originated in Space

In what appears to be seriously big news from a team of NASA-funded researchers, scientists have found evidence that some... 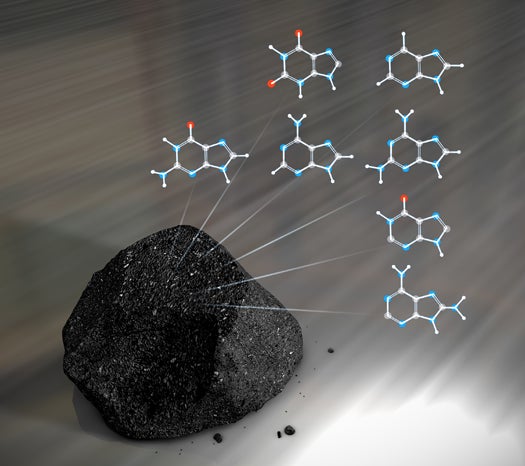 In what appears to be seriously big news from a team of NASA-funded researchers, scientists have found evidence that some building blocks of DNA–including two of the four nucleobases that make up our genetic code–found in meteorites were created in space, lending credence to the idea that life is not homegrown but was seeded here by asteroids, meteorites, or comets sometime in Earth’s early lifetime.

This is big news, of course, because if the ingredients for life were brought here from some external source, there’s always the possibility that the same thing has happened elsewhere in the universe–possibly many times over.

Scientists have been extracting fragments of DNA from meteorites for decades now, but there was never really hard proof that those pieces of biological molecules were native to the extraterrestrial object rather than terrestrial contamination that occurred when the object slammed into Earth. So while the idea of DNA riding aboard extraterrestrial objects has been floated before, this is the first time we’ve been presented real evidence backing that notion.

The idea isn’t that these building blocks are just passengers aboard meteorites, but that the chemistry inside asteroids and comets can actually manufacture the essential building blocks of biology. And a liquid chromatography and mass spectrometry analysis of sample meteorites and the environments where they were found seems to confirm this.

Here’s the basic gist of the findings: The LC and MS analysis separated and analyzed the component parts of the samples and found adenine and guanine, two of the components of the double helix that make up the code that tells our cells what to do. They also found hypoxanthine and xanthine, which don’t factor in to DNA but are used in other biological functions.

But more interestingly, the researchers found three nucleobase-related molecules: purine, 2,6-diaminopurine, and 6,8-diaminopurine. These last two are rarely used in biology, but they are like analogs for nucleobases–the same core molecule but structurally slightly different. That’s really important because if the meteorites were terrestrially contaminated, they wouldn’t be there (because they are not used in biology). But if the chemical processes going on inside an extraterrestrial object really are churning out prebiotic stuff, then you would expect to see all kinds of nucleobases–the ones used for biology, and others that aren’t.

Moreover, analysis of the Antarctic ice and Australian soil around where the meteorites were found showed the amounts of the two nucleobases as well as the hypoxanthine and xanthine to be drastically lower. If the contamination were terrestrial, one could expect equal amounts of the molecules (or less) to be present in the meteorite samples, certainly not more.

It’s a pretty convincing case, though one that will undergo a lot more scientific scrutiny. If comets and asteroids really are churning out the ingredients for life, it certainly changes our picture of life in the universe, and the possibility that other rocks out there might be harboring their own biological systems.