The only thing to we have to fear is fear itself. Also suffocation. 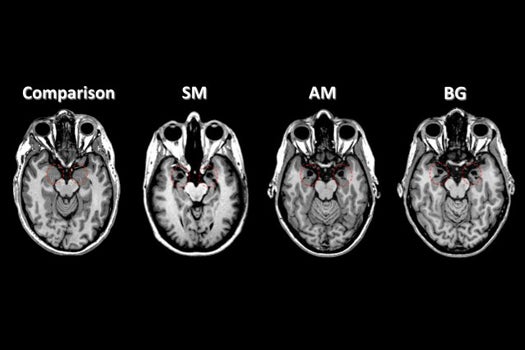 What do you do when someone exhibits no ability to feel fear? Much like when someone claims they aren’t ticklish, the only possible reaction is to try to prove them wrong. Scare ’em, and scare ’em good. For science.

Previously, the amygdala, an almond shaped area of the brain, was thought to be the brain’s main region for processing fear. But new research from the University of Iowa shows that it may be more complicated than that.

Scientists incited feelings of panic in three female patients with damaged amygdalae — women who normally exhibit no signs of fear. This suggests that feelings of intense, overwhelming fear (panic) are located in a different part of the brain than normal fear.

Without a functioning amygdala, one extensively studied patient called S.M. feels no trepidation about things like snakes, spiders, scary movies or being held at knife and gun point. Since the rare Urbach-Wiethe disease struck her as an adolescent, damaging her amygdala, she doesn’t act with any urgency in an emergency situation, and she cannot even recognize fearful faces.

S.M. and the other two amygdala-damaged patients, a set of identical twins, were asked to inhale a gas mixture of 35 percent carbon dioxide. Researchers didn’t expect them to panic. Inhaling CO2 stimulates breathing, as increasing the level of CO2 in your bloodstream (like when you exercise) causes your respiratory system to increase the speed and depth of your breathing.

Inhaling CO2 can also sometimes cause fear and panic attacks, especially if you already have panic disorder. Researchers assumed that the fear associated with not being able to breathe would be lessened for patients like S.M., who hasn’t felt fear since contracting Urbach-Wiethe.

However, all three patients with amygdala lesions had panic attacks after inhaling CO2, in contrast to only three out of 12 of the control patients, a rate that’s about normal for adults without a history of panic attacks. The test was repeated to ensure it was reproducible.

The “fearless” patients self-reported higher levels of fear and panic than the control group. They also exhibited greater physiological responses than the non-panickers, including higher rates of respiration.

But many patients with fully functioning amygdalae became nervous leading up to the test, breaking into a sweat and showing a rising heart rate just before inhaling the carbon dioxide. This bolsters previous research that contends that the amygdala deals with the fear response to external stimuli, whereas the CO2-induced panic was internally produced.

“The higher rate of panic attacks in the amygdala-lesion patients suggests that an intact amygdala may normally inhibit panic,” the researchers write. This suggests that “loss of amygdala function might contribute to the development of panic disorder.”

Pinpointing the regions of the brain involved in panic could help develop new treatment for panic attacks and other anxiety-related conditions like post-traumatic stress disorder.