Chinese astronauts have returned to Earth in a re-entry broadcast live on Chinese television, landing safely in Inner Mongolia. We... 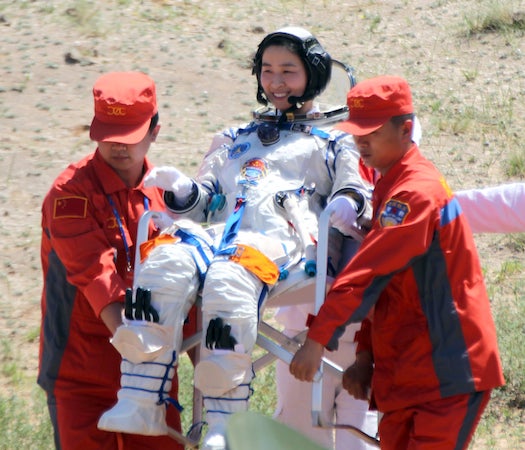 China's first female astronaut, 33-year-old Liu Yang (C), gets carried by two retrieval crew members after she emerged from the charred returned capsule of the Shenzhou-9 spacecraft, which means "divine vessel" in Chinese, in a remote area of northern China on June 29, 2012, after a 13-day mission to an orbiting module that is a prototype for a future space station. Three Chinese astronauts returned to Earth after achieving China's most complex and longest operations in orbit, major steps forward in the country's effort to build a space station by 2020. CHINA OUT AFP PHOTO (Photo credit should read STR/AFP/GettyImages). STR
SHARE

Chinese astronauts have returned to Earth in a re-entry broadcast live on Chinese television, landing safely in Inner Mongolia. We saw the historic launch and docking earlier this month, and now, after more than a week of running tests aboard the solar-powered Tiangong 1 space module, the crew of three is back. Needless to say, this is another big leap for the country.

The Shenzhou 9 flight was China’s fourth manned spaceflight, and the crew of taikonauts–as astronauts are known in the country–includes the first Chinese woman to make the journey into space. The module won’t be retired just yet; it could stick around for another two years, officials say, set to accommodate more missions.