The hunt for dark matter is arguably the biggest scientific search ongoing right now–even as scientists close in on the... 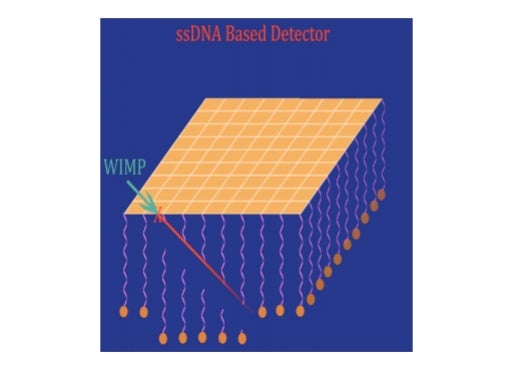 The hunt for dark matter is arguably the biggest scientific search ongoing right now–even as scientists close in on the elusive Higgs boson–but finding it is not proving easy, since physicists can’t see or measure the stuff, or even be sure that it’s there at all (it is, after all, theoretical at this point). To find it, a notable collaboration of astrophysicists and geneticists is gathering to build one of the most far-out particle detectors we’ve come across in recent memory: a dark matter detector made out of DNA.

Many physicists agree that based on our best models of the cosmos dark energy must be all around us, exerting itself on galaxies and galaxy clusters and even enveloping the Earth as it makes its way around the Sun (which is slowly making its way toward the constellation Cygnus as it rotates around the galactic center). If that’s the case, then Earth should be facing into a headwind of dark matter in front of it and leaving a tailwind of dark matter in its wake, so as the Earth rotates throughout the day the dark matter signal should vary.

So a team including University of Michigan astrophysicist Katherine Freese and Harvard’s George Church, a noted geneticist famous for his work in genome sequencing and the like, are collaborating on a new kind of directional detector that aims to capture the shifting direction of dark matter particles using DNA.

The detector would work by hanging multiple strands of single-strand DNA from a thin gold sheet, creating a “forest” of dangling DNA strands directly beneath a canopy of gold sheet. When dark matter particles strike the heavy gold nuclei in the canopy, those nuclei are knocked loose and sent smashing through the DNA forest below, severing the DNA strands and carving a path through the “forest.” The severed strands fall to a collecting plate below; since the location and sequence of each strand is recorded beforehand, a quick analysis of which strands have been severed can provide a picture of how the gold nuclei moved through the forest, and in turn how each nucleus was struck by the dark matter particle.

In other words, such a detector would show both the presence of dark matter and its incoming direction. Moreover, unlike many of the dark matter detectors trying to find the stuff today, this sensor array doesn’t have to be super-cooled, nor does it have to be very big–a one-meter-square array could probably do the trick. But there are also a lot of problems inherent in building a one-square-meter array of dangling single-strand DNA and a functional method for collecting and analyzing the severed strands. It won’t be easy, but there just might be a Nobel Prize on the other side if Church, Freese, and company can figure it out.

Read all about it at arXiv.