This compact flying machine can be controlled with simple hand gestures 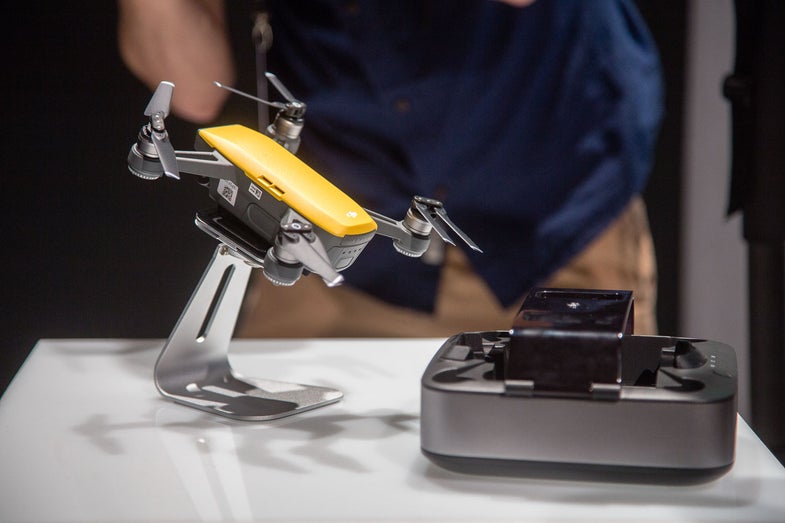 When I worked at Popular Photography (RIP), part of my job was to review drones. I understood what made a drone desirable and what features were cool enough to notice, but I never got good at flying them. I crashed one into a picnic table and literally flew one off of a cliff, where it lost GPS contact and flew off over the wilds of upstate New York bound (I think?) for Canada. And while these unmanned crafts have come a long way since their humble and wobbly beginnings, they can still be a pain to set up and fly. The category leader DJI is hoping its new “palm-sized” drone called the Spark can change that.

The $500 flying machine comes in a variety of different colors, which is typically an indicator that a product is meant for the masses—there’s no risk of mistaking this sunny yellow number for a piece of military equipment. The Spark uses the typical quad-rotor configuration that should be very familiar by now if you have ever seen any of DJI’s other aircrafts. It also has a lot of the AI-driven smarts you’ll find in higher-end models like the Mavic Pro and the Phantom that help it handle things like object detection and automated flying.

The hook, however, is Spark’s simplicity. One of the primary ways to interact with the craft is gesture recognition, in which the sensor actually detects the pilot’s hand and follows it around like you’re Darth Vader and it’s being compelled by the Force. This isn’t a totally new idea, but gesture control often requires some kind of external sensor or glove. That’s not the case here. You can even launch the drone from your hand and then catch it out of the air if you’re feeling brave or you have really tough thumbs.

Gesture control isn’t magic, of course. You can’t do a special wave and expect it to go all Michael Bay, but there are some pre-planned flight modes baked in that can be accessed through the DJI app. Some of them are familiar—like the ones that make the drone circle or follow a specific object—but there are new ones, too. Rocket mode, for instance, shoots the drone straight up into the air for a dramatic shot, while the Helix mode moves the drone in an expanding spiral around a subject. You could learn to do all this manually, but pressing a button in an app is a lot simpler, even if it is less flexible.

DJI is also hoping to simplify things on the editing side. The new DJI app can scan footage and automatically edit what it thinks are the “best” shots into a 30-second video complete with background music. This kind of AI-driven automation is getting more common–in fact we just saw similar tech from Microsoft at its Build developers’ conference two weeks ago.

While the 10.5-ounce Spark can do many of the same functions as the Mavic Pro, which is twice the price, there are some things that make it decidedly less pro-oriented. The battery on the Spark, for instance, can only last about 16 minutes under optimal conditions, but real world flying will probably be less—especially if it has to contend with the wind. That’s actually pretty good for a drone in this class, but it’s still a pittance if you’re a pro filmmaker or photographer, especially when compared to the 27 minute flight time of the Mavic Pro.

The camera shoots 1080p video at 30 frames per second instead of 4K or even 2.7K. It does have the same sized image sensor as the Mavic Pro, though, at 1/2.3-inches, which is slightly larger that most smartphone sensors and quite a bit smaller than the 1-inch sensor in the DJI Phantom Pro (larger sensors typically produce higher-quality images with less noise).

The Spark also tops out at 31 miles per hour, where the Mavic Pro can hit 40.

But, the overall idea of this drone is to make all those technical bits not matter as much. DJI claims that more than 40 percent of the people it polled planned to make a drone purchase in the next year, and it seems fair to assume simplicity is a key factor when choosing a drone to bring home. For most people, a slower drone is more likely to stay in one piece. And it takes just 25 seconds to get it from its bag into the air. Bigger drones can take a minute or more, which feels like forever when you’re standing in a field waiting to take flight.

There are even new photo shooting modes that mimic “creative” filters typically found on consumer-oriented compact cameras. For instance, the Spark has a Shallow Focus mode that fakes the background blur you’d expect to get out of a DSLR. One of the demos DJI showed during the announcement was a YouTube vlogger proving that his tech-averse mom could make the drone go. It’s a bit on the nose, but telling for this adorable little flying machine.

Pre-orders start today for $499, but the drone itself will start shipping out in mid-June. You can also pre-order the Spark Fly More Combo Kit, which costs $699 and comes with an extra battery, an extra set of rotors, a charger for multiple batteries, a carrying case, and blade guards for flying inside without costing yourself time and money repairing your drywall if things go sideways. Honestly, the kit seems like the better deal since 16 or so minutes of flight time on a single battery likely won’t be enough.

When it hits the market, it’ll have a lot of competition to wade through. The primary challenger is the Yuneec Breeze, which is roughly the same size as the Spark, and even has a similar-looking form factor. Plus, the Yuneec shoots 4K. Still, Yuneec and fellow drone-maker Parrot both managed just 7 percent each in terms of market share for drones between $500 and $1,000 last year; DJI claimed 36 percent of that bracket. That’s a long hill to climb–or fly up.