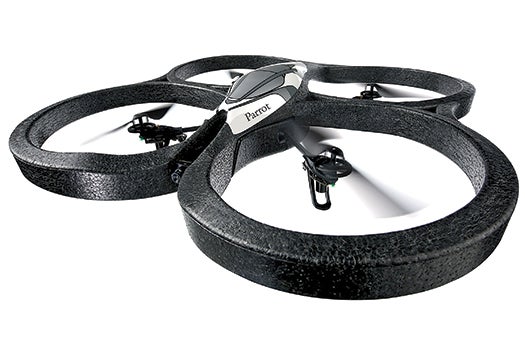 My contact was a gruff, swarthy man, wearing a couple days’ stubble, an immaculate black shirt, and a scowl. He looked me up and down sourly, then exhaled as if weary. He’d done this before. Too many times, perhaps.

His name was Mario. And yes, he could sell me a surveillance drone—if I could meet his price. Could he interest me in a remote-control spy tank with a night-vision camera while I was at it?

Mario led me across the room and nodded wordlessly at a compact machine with four propellers. The quadrocopter’s body was about the size of half a Costco papaya. Four thin rotor arms jutted out at diagonal angles, each attached to a pair of sculpted black blades. With one forward-facing camera and one that looked down, I could collect video footage and stills from up to 80 feet in the sky and 160 feet straight on.

Mario pressed a button on the controller in his hand. The blades whirred, and the drone lifted off. He held up a screen. The images were crystal clear.

As a journalist, I’d worked in Cambodia and trailed the U.S. military through Iraq’s Anbar Province. But to purchase my surveillance drone, all I had to do was trundle down to a Brookstone in the Palisades Center mall in New York. It was located between a sunglasses shop and Victoria’s Secret.

I handed Mario a credit card. For $299, he handed me a Parrot AR.Drone, a piece of military-style hardware that would stream footage to my iPhone. I told him I planned to videotape my neighbors.

“The only law I know of,” Mario advised, “is trespassing. My first day working here, I got a call from a police department in New Jersey. Some guy was flying a plane over a neighbor’s house.”

“The law will do for drones what the Internet did for desktop computers,” says Peter Singer, a fellow at the Brookings Institution and an expert on drones. “It will open up entire new markets.”

That change won’t be met without resistance—or regulation. In Rancho Mirage, California, the city council will vote on what is likely the first municipal ordinance regulating the use of drones over residential neighborhoods—after someone complained that a UAV was hovering above his home. In Oregon, lawmakers are pushing a bill that would apply trespassing, stalking, and privacy laws to aircraft. In Texas, legislators are considering a ban on the use of drones to photograph private property without permission.

Happily, legislators in New York, my home state, had not yet introduced such restrictions. Back safely in my man cave, I tore open my drone box like a kid on Christmas. In the Apple store, I downloaded the app that would allow me to control my plane and its cameras with my phone. I watched training videos. I called friends and bragged about future exploits. 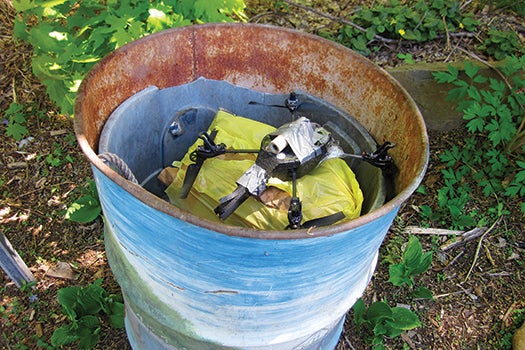 The market for military, commercial, and recreational drones is on track to rise to $89 billion in the next decade. Above: The author’s drone did not survive weaponization

Outside, I connected the battery to my plane and stepped away. The propellers shuddered to life and the drone lifted off. I maneuvered the craft across the street. Flying was harder than I’d expected. First I almost clipped a power line, then I sent the quadrocopter sailing toward a tree. Horrified, I watched as the propellers brushed a branch and the kill switch kicked in. My prized drone dropped like a stone, hitting the pavement with a sickening smack. One of the propeller arms broke off, and the back camera mount snapped in half.

Back at the mall, Mario informed me my warranty didn’t cover collisions. But I was already too deep into the project to turn back. I paid $299 for another AR.Drone and vowed to train in a less windy environment. The mall’s large indoor atrium would do fine.

“They’ll stop you immediately,” Mario warned. “Mall security doesn’t even like it when we fly past our property line.” I thanked him for the advice and five minutes later, a lacy baby-blue bra appeared on my screen, tightly hugging a Victoria’s Secret mannequin. Then, a dour face appeared.

“Is there a way for you to not do that?” demanded a short saleslady with a tape measure draped around her shoulders. “Somebody could get hurt.”

Customer injuries, I discovered, were a concern shared by many humorless salesclerks—at Foot Locker, Zales, and Staples, among others. So I decamped to the food court—equidistant from so many different stalls, I figured no single cashier would feel responsible for stopping me.

My drone lifted off, and I buzzed two senior citizens eating salads (they ducked). As I waited for mall security to arrive, I made flyovers of five salads, an order of chicken nuggets, and three slices of pizza. Eventually, I grew bored and decided to head outside.

In my quiet town, I soared above the meter man as he wrote parking tickets. I hovered in front of the Village Hall, hoping to gather footage of handcuffed prisoners heading into court.

That night, I floated outside the home of a magazine editor who lived nearby. Sadly, he wasn’t home. The juiciest footage I gathered was of a teenager sitting motionless in front of a television. Frustrated, I drove to a park frequented by prostitutes and drug dealers. When I piloted my drone toward a crowd of young men on a notorious set of park steps, the laughter died out. Then they left, unnerved.

As I drove home, I thought about Luis Sepúlveda, the state assemblyman from the Bronx who announced plans in April to write legislation that would ban individuals from arming their drones. I was suddenly struck with a feeling of deep unease. Beyond my run-in with the irritated clerk at Victoria’s Secret and a few other wage slaves, I had roamed my town, the mall—even the drug-dealer steps—with impunity. I had even charged my battery in the Village Hall. If someone wanted to turn a drone into a mini cruise missile, he or she wouldn’t face a lot of resistance.

And that got me wondering: Could I turn my cheap Brookstone drone into a weapon?

Could I turn my cheap Brookstone drone into
a weapon?The next day, I shelled out $50 at a local hobby shop for a detonator and three tubes packed with gunpowder normally used to launch model rockets. In an isolated park not far from my house, I sat on a rock and duct-taped a tube to my drone. When the craft lifted off, I checked twice to make sure no one was around, then pressed the detonator.

Flames and smoke shot out of the back of my drone, whipsawing it violently, like a small animal caught in the jaws of an alligator. It slammed into the ground, convulsed, then went still.

It was at once mildly disappointing and somewhat disturbing. In this Wild West age of unregulated personal flight, even a rank amateur like myself can transform a toy into a hazard, an action that should be—and probably soon will be—illegal. Yet for all my moral objections, I couldn’t help but stare at the remaining two rocket engines lying before me and think, Next time, I will use more gunpowder.