You know, it’s one thing to “shoot down” the top secret spy drone of the imperialist zionist heathen enemy. But... 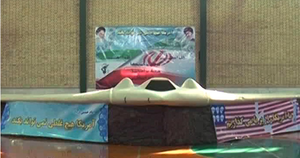 You know, it’s one thing to “shoot down” the top secret spy drone of the imperialist zionist heathen enemy. But come on Iran–stop bragging. Iran today released a two-and-a-half minute video and the first images depicting the RQ-170 stealth drone that it claims it shot down on Sunday. It’s the first visual proof that leaders of the Islamic Republic are actually holding the drone it their possession.

If you missed this latest diplomatic dust-up: on Sunday Iran claimed its military had downed an American drone, a claim that U.S. officials somewhat backed up by saying controllers in Afghanistan had recently lost contact with a drone flying in that country and that–maybe just maybe–that drone accidentally wandered into Iranian airspace.

The plot thickened when the U.S confirmed that in fact the missing drone was indeed an RQ-170 (as Iran had originally claimed), a top secret drone designed to cruise undetected at up to 50,000 feet. It’s the same drone that offered aerial recon before and during the raid on Osama bin Laden’s compound. And it’s something the U.S. intelligence infrastructure would likely not like shared with its adversaries.

And now, as you can see in the video below, it certainly appears that a RQ-170 is in Iranian custody. The release of the images and video coincides with Iran’s lodging an official diplomatic protest over the American incursion into its sovereign airspace.

So we know the Iranians really have the drone and that the drone appears to be intact. Now comes the part where we, the public, try to parse the posturing (on both sides) from the truths. For instance, Iran claims its air defenses detected and shot down the drone as soon as it entered Iranian airspace. Yet the drone in the video looks highly un-shot-up and mostly un-crashed. The official in the video is apparently explaining this away by claiming Iran’s military brought the drone down with the intention of causing minimum damage. Gravity generally doesn’t bend its rules based upon intention, but okay.

And then there’s the fact that the drone was recovered some 140 miles from the border. Had the drone been engaged just as it crossed into Iranian airspace, one could envision it limping its way in-country for a distance. But more than 100 miles?

Of course, the U.S. seems to be trying to sell the idea that it hasn’t a clue how the drone got into Iranian airspace, so I’m not trying to throw too many stones here. Suffice it to say that Iran is currently holding a piece of super-stealthy U.S. intelligence equipment that’s supposed to be secret, and whatever the truth is we’re probably not going to hear it in its entirety from anyone. Enjoy the video–after all, it’s also your first up-close look at the RQ-170.