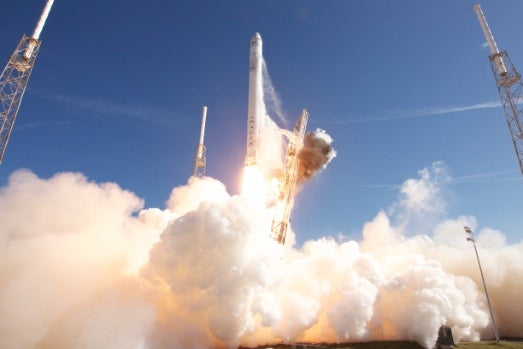 Update: After abnormally high pressures were detected inside the Falcon 9’s center engine, this morning’s launch was aborted at the last second. The next available launch window is this Tuesday.

Tomorrow morning, whether they realize it or not, Americans will likely wake up to a new era. Though nothing will be outwardly different, a fundamental shift in the nature of spaceflight will commence during the wee morning hours. Call it a defining moment, or a milestone, or simply call it what it is: the dawn of the private spaceflight industry’s real presence in outer space.

Barring some unforeseen setback, at 4:55 a.m. EDT, a Falcon 9 rocket carrying a Dragon spacecraft–both built by private spaceflight firm SpaceX–will blast off from Cape Canaveral Air Force Station in Florida en route to the International Space Station with the goal of becoming the first privately built spacecraft to rendezvous with the ISS. This is the partial culmination of NASA’s Commercial Orbital Transportation Services (COTS) program, which aims to do two things: jumpstart the commercial space industry’s ability to service low Earth orbit, and get NASA out of the low Earth orbit transportation business so it can once again focus on pushing the boundaries of space exploration.

Both of those goals are meaningful. For NASA, that (hopefully) means a return to days of boldly going where no man has gone before (to Lagrange points, for instance, or to asteroids and eventually Mars). But more so this weekend belongs to SpaceX. The company has once made history by being the first private company to launch and successfully retrieve a spacecraft from Earth orbit. A successful rendezvous with the ISS followed by a successful return of cargo to Earth will ring up so many “firsts” for the company that its place in spaceflight history will be secure.

Because, simply put, that’s what this weekend is: historic. It’s a shame almost no one is going to be awake to see it get underway.

Tomorrow’s rocket launch marks a passing of the torch that’s beyond symbolic.

As launches go, this is business as usual. But it marks a passing of the torch that’s beyond symbolic. NASA wasn’t the first to go to space, but it became the best. Post-Apollo, both the Russians and the Americans proved they could make regular trips to low Earth orbit and back–albeit at a high financial cost. What SpaceX and the rest of the private space industry aims to do is bring low Earth orbit even closer to home by proving that space is no longer only reserved for wealthy governments–that everyday civilians can access space at regular intervals and at a reasonable cost. Fifty years after we first went there the space immediately around the planet will cease to be a frontier and become a settled and civilized place.

On Saturday morning, the company’s Falcon 9 rocket will lift off as it has before, carrying a Dragon capsule full of non-essential cargo skyward. The real point of this mission is to prove that SpaceX can safely maneuver its robotic capsule on orbit prior to linking up with the ISS.

To that end, from the moment the Dragon capsule reaches its preliminary orbit and deploys its solar arrays it will be undergoing something of an audition that will last for several days. A series of carefully orchestrated engine firings will bring it closer to the ISS, during which time it will test its Absolute Global Positioning System, which uses GPS satellites to determine its precise position in space. It will conduct a free drift demonstration, wherein all of its thrusters will be powered off and the spacecraft will simply float. And at the opposite extreme, it will try out its abort function to make sure that in an emergency, it can quickly clear the vicinity of the ISS.

If all of that goes well, Dragon will approach within 1.5 miles of the ISS on the third day of its flight (Monday) and perform what’s known as a “fly-under,” in which it will fly below the station while testing out its relative GPS against the space station’s and link up with it via UHF communications to ensure the astronauts aboard the ISS can exchange commands and data with the spacecraft. After all of that, on mission day four (Tuesday), NASA will either call off the demonstration or allow the docking to proceed.

Here things begin to liven up again. Having made a huge loop around the ISS from its place below it to points in front of and above it, the spacecraft will take up residence behind and below it once again. The final approach will take hours. A series of go/no-go tests will be completed at various distances from the ISS as the spacecraft inches closer. LIDAR and thermal imaging systems will be checked and rechecked. And after all this delicate dancing, at just 32 feet from the ISS, astronauts aboard will finally use the station’s robotic arm to snare the Dragon capsule and reel it in. It will remain berthed to the ISS for two weeks.

And only now do we finally come to the exciting–and most important–part. Both Russia and the European Union currently have robotic space vehicles that they send to the ISS carrying cargo and supplies, vehicles that are then decoupled and discarded in Earth’s atmosphere, where they burn up upon re-entry. These spacecraft work, but they are clearly wasteful; they are single-use spaceships. Dragon will go a mile further by returning to Earth to be used again. After days and weeks of waiting and watching and testing and then simply being docked, the capsule will return home in a matter of hours.

Just four hours after being decoupled from the ISS it will begin its de-orbit burn, which will last about seven minutes. All said, re-entry will take half an hour. Some 250 miles off the Pacific Coast of the U.S., Dragon will come splashing down–just like the Mercury and Gemini and Apollo capsules from NASA’s golden age. But packed with cargo sent back from the ISS, the Dragon will really be more akin to a Space Shuttle. America will once again have the ability to go into space and safely return–something we’ve done hundreds of times before and yet, five decades and billions upon billions of dollars after first punching a hole in the sky and entering the space beyond, something totally new.