Streetlamps, cell phone towers and parking meters lend a certain urban charm, but these unnatural forms can also get a... 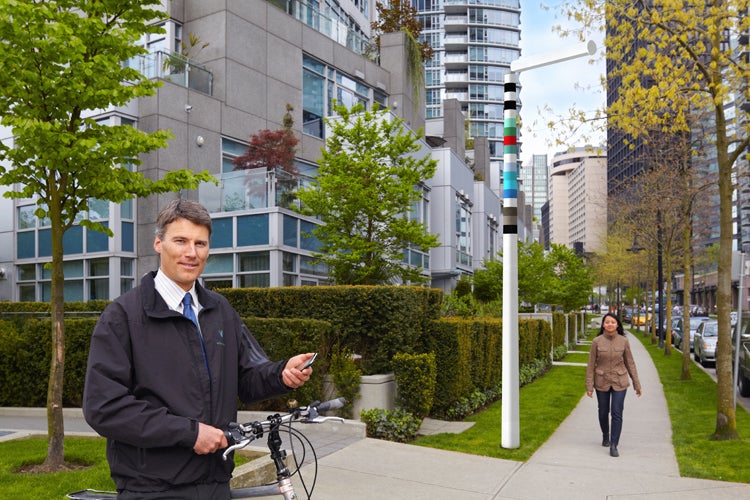 Streetlamps, cell phone towers and parking meters lend a certain urban charm, but these unnatural forms can also get a little clunky, especially as they grow in number. To get rid of the clutter, the city of Vancouver is planning new all-purpose utility towers that will provide WiFi, cell phone service, parking, car charging and more — all wrapped up in a Candy Land-like stripey pole.

They’re called V-Poles, for Vancouver, and they’re the brainchild of Canadian novelist Douglas Coupland. He conceived the idea after he stumbled upon something called the lightRadio, developed by Bell Labs and Alcatel-Lucent, which compresses a cell phone tower’s circuit boards and cables into a tiny cube. The devices can be stacked up inside a tower like Legos, according to Coupland. It can serve multiple frequencies and standards, i.e. 2G, 3G or LTE, and it can work anywhere there’s a power supply and a broadband connection. Just add other services, and you’ve got a complete information and energy ecosystem on one tree.

From bottom to top, it would include an inductive coil charging pad for electric vehicles; stacked telecom boxes for various providers; a WiFi transmitter; and an LED streetlamp The poles could even power a neighborhood bulletin board. Coupland’s idea also includes a wide array of color schemes from which neighborhoods could choose, representing anything from a pileated woodpecker to the Vancouver Canucks.

“Data transmission is no longer something scary you don’t want in your backyard. Now you want it directly in front of your house,” Coupland says. It might as well look neat, too, he adds.

The National Post says there’s no firm price tag, but the poles could cost thousands of dollars, not tens of thousands — that’s far cheaper than existing Vancouver plans for things like electric car charging stations and LED streetlamps.

Coupland unveiled the design at the New Cities Summit in Paris last week. 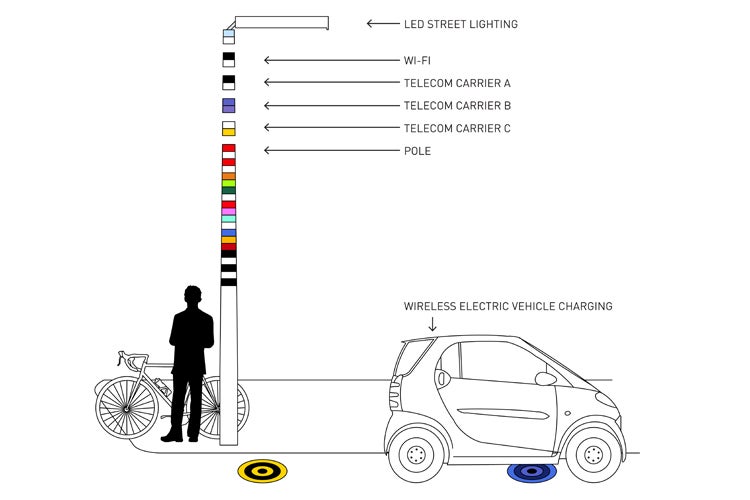 The V-Pole will provide wi-fi and mobile wireless, LED street lighting, electric vehicle charging, parking transactions and can even act as an electronic neighborhood bulletin board.