You Built What?!: A 14-Ton Pizzeria on Wheels

The oven alone in this behemoth is a whopping 5,000 pounds 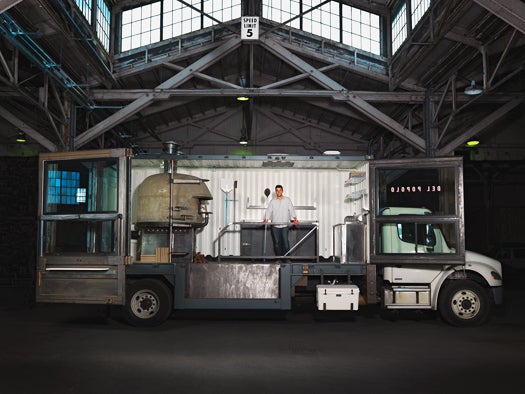 Jon Darsky spent years in San Francisco restaurants baking Neapolitan-style pizzas—thin crusts topped with fresh salted tomatoes and milky fior di latte mozzarella—in old-school specialty wood-fired ovens. In 2010 he began looking around for a place of his own but couldn’t find the right piece of real estate. After a trip to Austin, Texas, a hotbed of mobile street vendors, he scrapped the idea of a brick-and-mortar pizzeria and decided to put his oven on wheels.

Two years later, his new business is finally ready to roll. It isn’t the average food truck stuffed inside an old step van, and not just because there’s smoke (intentionally) pouring out of the rooftop. Darsky’s creation is a full-on mobile pizzeria. Customers place their orders with a waiter and then watch through the truck’s glass-plated passenger side as Darsky and a prep cook make pizzas over a giant fire in the 5,000-pound brick oven.

Darsky had a lot more experience making pizzas than he did making the equipment needed to cook them, so building an open kitchen in a truck wasn’t easy. He started out with a brand-new handmade Italian oven and sketched out an initial design for the truck with CAD software. He then worked with a team of engineers and fabricators to refine the design, putting the oven inside a used 20-foot shipping container and mounting it on a Freightliner M2 106 bobtail truck frame.

He also had to come up with a way to dampen vibrations from driving that could crack the oven’s silicon dioxide and aluminum oxide bricks. At first he wanted to float the oven and its 1,500-pound steel pedestal on an airbag cushion, but that would have been too high to fit inside the container. Now the entire container sits on a self-leveling air suspension system that looks like a stack of inflatable golf-cart tires.

Unlike most food trucks, which cook on propane, Darsky’s oven burns almond and oak logs, at a sweltering 800ºF. “Part of cooking this kind of pizza is about building a really big flame,” Darsky says. “It would be great to go from place to place with a raging fire. But that would be stupid and unsafe.” Instead he lights the oven when he gets to his destination. Fortunately, the oven walls’ 4.3 inches of fireproof brick retain heat for days, so Darsky can preheat the oven before he leaves. Then he extinguishes the flame, closes the oven up safely, and heads out on the road. 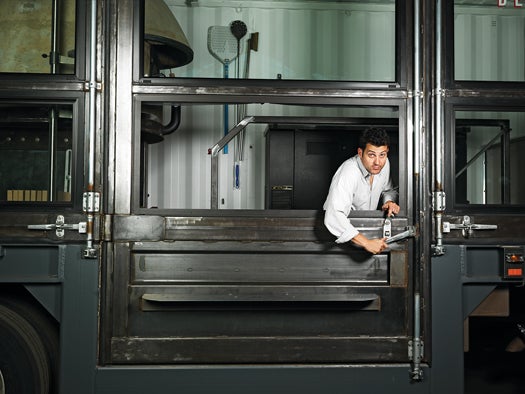 See how Darsky’s pizza truck works on the next page. 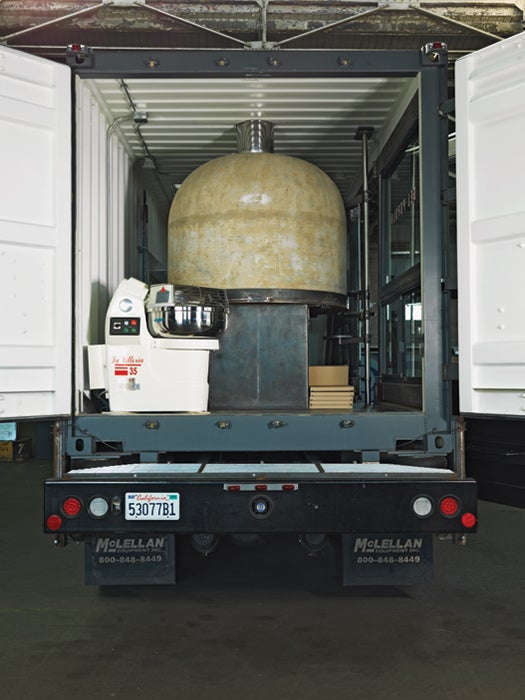 To protect his Stefano Ferrara pizza oven from stress fractures caused by road vibrations or potholes, Darsky installed a self-leveling suspension system. (It’s similar to the “air suspension” rides offered by moving companies to protect fragile items in transit.) He opens the valves on the tire-like cushions to deflate them, bringing the truck closer to street level. 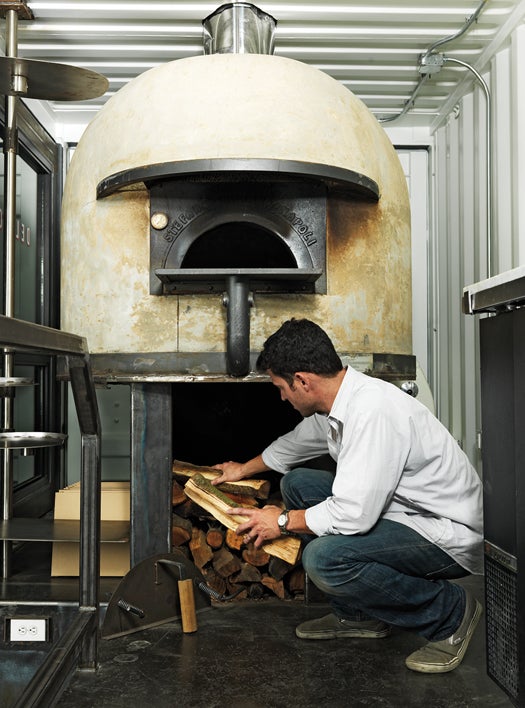 Darsky, a former scout for the Kansas City Royals and Cleveland Indians, learned the art of pizza making at restaurants including San Francisco’s acclaimed Flour + Water.

“The idea is to do as much as possible on the truck—to be completely self-contained,” Darsky says. “I don’t want to drive around and have a support van.” The container holds a kitchen with a large fork mixer, a refrigerator with a capacity for at least 200 dough balls, a water pump, a water heater and a three-bay sink (as required by the city health department). The oven walls insulate the chef from the heat of the fire, but Darsky made a hole in the roof for an A/C unit to keep himself extra cool.

Inspired by Ludwig Mies van der Rohe’s glass and steel architecture, Darsky designed the truck to be as minimalist and transparent as possible. The see-through walls ensure that he doesn’t have to work inside a claustrophobic cave of a kitchen, and the three 500-pound doors—each outfitted with tempered, laminated half-inch glass in aluminum frames—fold open to create a space for stand-up dining. The frames are set in compensation channels that leave room for the windows to move in case the truck experiences serious turbulence. Even in the event of an earthquake, Darsky says, the window glass won’t fall out. 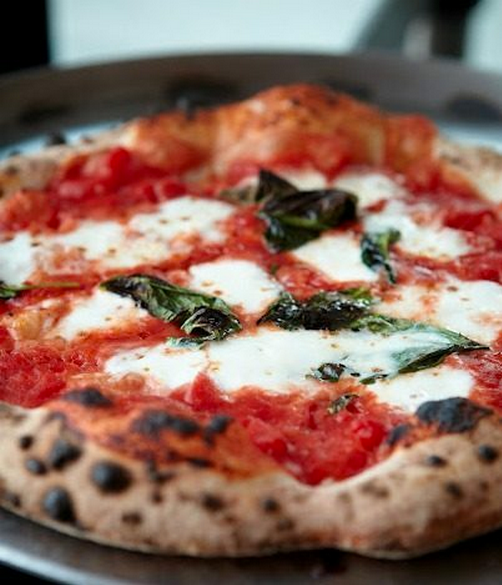 Darsky uses flour from Utah and Colorado and leavens the pizza dough with a sourdough starter he got in San Francisco. Pizzamaking requires microscopic bacteria and yeast that make the dough rise, giving it a characteristic flavor and, of course, making the whole operation work. Darsky’s recipe (for 10 250-gram dough balls that serves 10 to 20 people):

Combine 14 ounces of natural starter with 30 ounces of tap water. Stir for 20 seconds. Add 47 ounces of All Purpose flour and 1.25 ounces of salt. Stir or mix for 5 to 10 minutes depending on the vigorousness of the mixing method. Let rest overnight in covered container in refrigerator. Remove from refrigerator, allow dough to warm up for approximately two hours, then apportion. Allow dough balls to relax for some time depending on ambient temperature. Stretch dough balls to approximately 12 inches.