Changing The Teeth On The World’s Largest Tunnel-Boring Machine

Next year, workers will start digging a 1.7-mile tunnel underneath downtown Seattle using the world’s largest tunnel-boring machine. The 57.5-foot-diameter,... 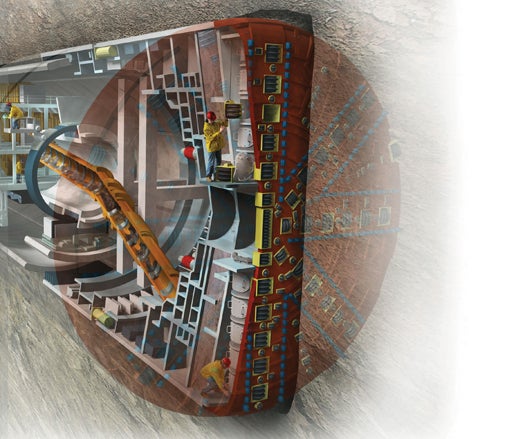 Next year, workers will start digging a 1.7-mile tunnel underneath downtown Seattle using the world’s largest tunnel-boring machine. The 57.5-foot-diameter, $80-million drill, which is currently under construction for the State Route 99 project, has about 600 cutting tools—steel bits and spinning disks on the borer’s face that break up dirt and rock. The tools may need to be inspected as often as every 400 feet, or about 20 times over the course of construction.

The Problem: Accessing the front of a boring machine that’s already belowground is hard, particularly in deep tunnels, where the air pressure is dangerously high. Repairing cutting tools, therefore, is typically a task for workers who must spend time in hyperbaric chambers each time they visit the machine to acclimate to the pressure. (Two hundred feet belowground in an enclosed tunnel can get as high as 5 bars—the equivalent of being 165 feet deep in open water.) Crews retract the front of the machine to create a space ahead where a group of about five workers operates while wearing special helmets for breathing in those conditions. They use pneumatic wrenches and hammers to loosen the teeth, and pneumatic pulleys, hoists and chains to tug them out. After installing the new bits or disks, the team returns to the surface. Replacing a single tool could take up to four hours.

The Solution: Engineers on the Seattle project have modified the design of the drill, manufactured by Hitachi Zosen, so that workers can replace the teeth from inside the safety of the machine itself. The new borer is large enough that people can work just behind the drill face at aboveground atmospheric pressure. An automated system retracts the cutting tools into the chamber, where a crew can make repairs. The chamber is also roomy enough to accommodate hydraulic pulleys and other hydraulic machines, which are more powerful than their pneumatic counterparts. The better equipment, combined with the safety and freedom from working at sea-level pressure, could make repairs about four times as fast.