Fiat says its catchphrase “small but wicked,” applied frequently to the new 500 Abarth, was coined for the Abarths of... 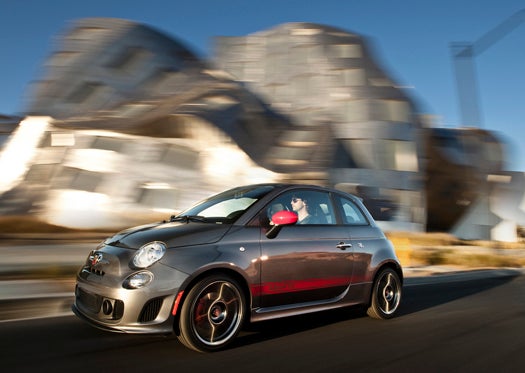 Fiat says its catchphrase “small but wicked,” applied frequently to the new 500 Abarth, was coined for the Abarths of the 1960s, and while we think that may be apocrypha, it definitely holds true for the 2012 model. This car is very fast, very fun to drive, and won’t break the bank–even if it isn’t for everyone.

A history lesson: The name–and scorpion symbol–of the new Fiat 500 come from Karl Abarth, a champion motorcycle racer, mechanic extraordinaire, and founder, in 1949, of “Abarth & C,” the original Fiat tuner shop. Re-introduced in 2007 by Fiat, the Abarth name connotes the tuning arm of the make, akin to Subaru’s STI, Mazda’s MazdaSpeed, and Mini Cooper’s John Cooper Works. All of these lines have commonalities–they are all small, lithe, nimble, and quick cars with a relatively humble pricetag. Affordable yet exotic, that’s the idea.

Let’s start with the engine, a sweet little 1.4-liter MultiAir Turbo four-cylinder. Built in the US at Chrysler’s engine plant in Dundee, Michigan, the tricked-out 160-horsepower, 170-pound-feet of torque engine are then shipped to the Fiat 500 plant in Toluca, Mexico for installation into the Abarth, which is equipped with a five-speed manual transmission.

The Abarth’s engine system has 60% more power than the naturally aspirated model, thanks to an added turbocharger and FIAT’s MultiAir fuel delivery technology. Says Fiat: “unlike engines that rely on direct action from fixed lobes on the camshaft to control intake valve opening and closing, MultiAir is an electro-hydraulic system that can control intake air, cylinder by cylinder and stroke by stroke depending on the demands from the standard electronic throttle control system […] Fuel delivery is sequential, multi-port, electronic, with injectors located to direct the fuel spray at the intake valves in a wide spray pattern that increases fuel atomization and enhances complete combustion for a smooth driving experience.”

Fiat also tuned the Powertrain Control Module, or PCM, with a sport mode for more power. That’s in addition to a re-jiggered ride and handling with a new suspension design, boasting a 40 percent stiffer spring rate and a 0.6-inch lower ride height. The ride is helped along by Abarth-designed cast iron front-lower control arms to provide improved lateral stiffness as well as dual-valve Koni front shock absorbers for a sportier ride.

Fiat added a slew of body and interior changes–they stretched the front end and added a larger front fascia to accommodate the larger engine, decked out the 500 with optional Abarth-designed 17-inch wheels, added a new exhaust, and changed up the interior with sportier attributes and Abarth-badged gauges. It’s a lot like your regular Fiat 500, just now in leaner, tougher fighting form.

The Abarth is really fast and quite nimble and, thankfully, it sounds like a sports car, thanks to the new engine and the twin-exhaust pipes. In terms of your basic “how fun is this thing to drive,” the Abarth is right up there with the too-weird-to-own Mini John Cooper Works Coupe. While 160 horsepower may not sound like a lot in this day and age of 650-plus horsepower Mustangs and Camaros, the Abarth is the right mix of size and stealth speed. 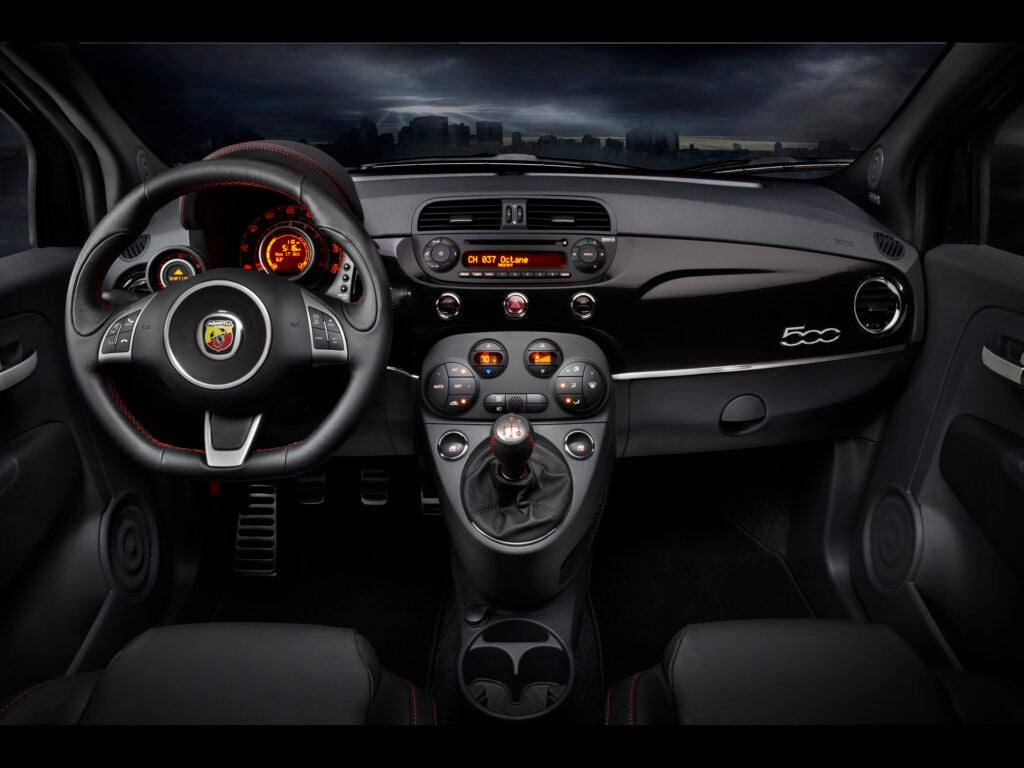 Road noise inside the cabin is obtrusive at anything resembling highway speeds–it sounds like you’re sitting next to the engine on an old 707 during a transcontinental flight. The Tom Tom Navigation system that mounts on top of the dashboard cuts viability and detracts from the drive, and the stereo controls are maddening, with more levels than a first generation BMW iDrive system. Honestly, we think the whole Fiat center stack needs a redesign. While its barebones aesthetic may play in other parts of the world, I prefer ease of use and thought-out product design, even in the smallest of cars. Also, the price, close to $27,000 for a nicely equipped Abarth, seems a tad bit high. We know there is a lot of bang for the buck, but for that much coin, we want more–perhaps a 6-speed manual transmission, which the Abarth needs to quiet its ride at freeway speeds.

The Drive: On our test drive, we were able to throw the vehicle into tight corners at, ahem, above posted speeds, and the Abarth held a steady line without much front torque spin, a rarity for a turbo-powered front-wheel-drive car. At freeway speeds, the Abarth feels firmer than the base model 500 due to its lowered stance and the extra weight up front from the new engine. The additional power also comes in handy when you pass a big rig on a windswept stretch of highway–there’s no longer the feeling of dread like you have in the base 500 during a pass like that.

We had a chance to test the Abarth on the track, too, where the grippy nature of the car had a chance to show. Fiat says the Abarth is “track ready”–we’re not sure about that, but lap after lap at the Spring Mountain Motorsport Ranch outside of Las Vegas was a hoot, if not something owners will want to do every weekend.

For an everyday city car, it’s a pretty good option, as it doesn’t have the same teeth chattering, bone splintering ride as some of its competitors. (We’re looking at you, John Cooper Works.)

The 2012 Fiat 500 Abarth has a base price of $22,700, including destination fees. By the time you add some options, say those lovely black 17-inch forged aluminum wheels, the nice leather seats, perhaps a power sunroof, that weird TomTom navigation unit and the Safety and Convenience package, you’re close to $27,000. That’s a lot of money for the Abarth, and bumps the car into a different territory that competes with the Mini Cooper John Cooper Works, the MazdaSpeed 3, the Subaru WRX and Volkswagen GTI. It’s still not a pricey car, but there’s some tough competition in that weight class.

The Fiat 500 Abarth is a fun little car in a crowded and ever-changing segment, and does a fine job of standing out thanks to clever packaging, a good power-to-size ratio, and a neat ad campaign. Do we see the Abarth as a volume leader for Fiat? Not at all. But as the halo car for the whole Fiat brand in America, it does a fine job of conveying the Abarth ethos. Come to think of it, “small but wicked” isn’t really too far off the mark.